MHHV > News > The Premier of Victoria, the President of MHHV Inc. and the State President of the RSL Launch the 2012 Poppy Appeal

Since 1920, the red poppy has been used as a symbol of commemoration to soldiers who have fallen in times of war.
During the First World War, poppies were among the first plants to bloom on the devastated battlefields of northern France and Belgium. According to soldier’s folklore, the vivid red of the poppy came from the blood of their comrades soaking the ground. Poppies grew in profusion over the earth which had become the grave to thousands soldiers, making the poppy an appropriate symbol to represent the sacrifice of life and the bloodshed of trench warfare.

The Poppy Appeal has been run by the RSL across Australia since 1921 and Victoria leads the nation in terms of support for the Appeal from the public.

Each year in Victoria, thousands of volunteer collectors take to the streets of towns, cities and regional communities to sell red poppies signifying those who have sacrificed their lives to protect our great country. The Poppy Appeal has always and will always only use volunteers to assist with fundraising during the Appeal. Unfortunately, many of our tireless volunteers are now in their twilight years and are unable to collect as often and for as long as they have in previous years. The RSL is focused on recruiting new volunteers over the coming years to relieve the burden on our ageing core supporters.

All monies raised in Victoria go into the General Appeals Patriotic Fund, a fund regulated by State legislation that is used to assist current and former members of the Australian Defence Forces and Allies, as well as their dependants in times of need.

Throughout Victoria, the funds are managed and distributed by both the individual RSL Sub-Branches (of which there are approximately 300) within their local veteran community and through the RSL State Branch at ANZAC House. Funds are used for various activities including emergency financial assistance (such as food & petrol vouchers, rent & bond payments), medical needs, property maintenance, funerals, aged care support, mobility aids and any other needs of the veteran community, whether young or old, RSL members or not.

In a bid to secure widespread awareness of Remembrance Day, the Victorian Poppy Appeal is launching a new online campaign, www.PlantYourPoppy.org. www.plantyourpoppy.org will launch mid-October and organisers are looking for 111,111 poppies planted in the online garden by Remembrance Day, November 11.

According to Poppy Appeal Director, Mr Peter Smith, this is the first initiative of its kind undertaken by the Victorian RSL and the aim is to engage with an audience that has previously been unreachable.

“This campaign is a milestone for the RSL and will enable us to reach out and communicate directly with the Victorian public in a way we’ve never before attempted,” said Mr Smith. “We believe that Plant Your Poppy will definitely raise awareness among a new, more tech savvy audience and will hold broad appeal,” said Peter Smith. 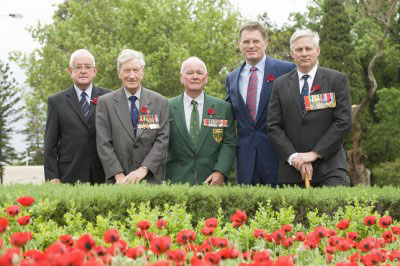