There Goes a Man ("if ever there was one")

MHHV > Articles > War, Society, Memories, Commemoration and Heritage > There Goes a Man ("if ever there was one") 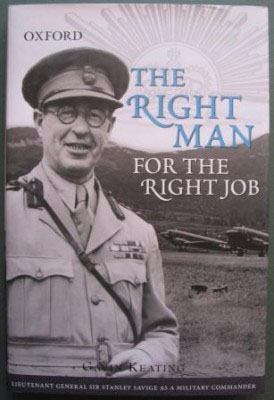 There are many biographies that contain most of the facts of the subject’s life but few which seem to contain not merely the achievements of the person, but the essence. Such is this account of Stan Savige, perhaps one of the forgotten men of WWI and II. He was one of the few to rise through the ranks, from Lance Corporal to Lieutenant General.  If not the founding father of Legacy he was for many years the driving force of this uniquely Australian organisation.
Savige was born in Victoria, left school in Korumburra at age 12 and had numerous jobs as a young lad. He served in the Cadets and Boy Scouts in his youth, and had a great love of the bush. At age 17 the family moved to Melbourne, where Savige passed a 3 year teacher training course.
WWI service included Gallipoli and the Western Front as a fighting soldier; but perhaps the most fascinating part of his service (and the most recently topical), was his attachment to “Dunsterforce” in what is now known as Iraq and Iran in1918. He enlisted in the Australian Imperial Force (1st AIF) in 1915 and served with the 24th Battalion at Gallipoli,  rising to the rank of warrant officer. Appointed as a lieutenant, he was Battalion and then Brigade Intelligence Officer and at this time came under the influence and to the notice of then Colonel (later General Sir) John Gellibrand, who became his mentor and friend. Awarded the Military Cross for his role in some of the most bloody battles fought by the AIF, in 1917 Savige was promoted Captain but refused promotion to Brigade Major.  Instead he joined Dunsterforce. 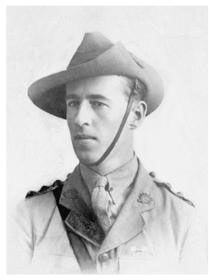 General Lionel Charles Dunsterville – the ‘Stalky’ of Kipling fame – ‘commandeered’ a unit of officers and NCOs who represented the cream of Canadian, NZ, South African and AIF soldiery. The AIF quota of 45 alone had 34 decorations among the personnel. The force mission was to prevent Turkish incursion across Persia, following Russia’s exit from the Great War. The unit moved from the Persian Gulf via Basra, Baghdad and Kasr-i-Sherin towards Hamadan through what is now termed ‘bandit country.’  After several interesting confrontations, solved by guile and bluff, the tiny force was divided and the Dominion cavalry force came under Savige’s command. In two months the cavalry force covered 600 miles (1000 km) and were based at Bijah (west of Tehran) at a height of 2000+ metres. They soon moved further west to Lake Urmia. Confused action soon followed.
A group of seventy thousand Armenian refugees was attempting to flee east from groups of Turkish soldiers preparing to attack them. However, south of this fleeing mass, an imminent force of Turks and Kurds was moving up a valley to cut off the terrified Armenians.  With only eight Dunster Force men and 24 armed Armenians, Savige rode towards the latter force and totally disrupted their movement. The following morning, as a reinforced enemy attempted to advance, Savige’s small group employed Boer type tactics against them, retreating under fire from hilltop to hilltop – this action was described by the Official War Historian in glowing terms. The further protection of the refugees continued but unfortunately the greatest scourge of armies – disease – began to take its toll. Savige contracted malaria and developed beri-beri and was ultimately evacuated. Only symptomatic treatment of malaria was possible until 1942, and deaths were common.  For his leadership in Persia Captain Savige was awarded the Distinguished Service Order. After months of recuperation he returned to Australia in March1919. [For an account of Dunsterforce see The Adventures of Dunsterforce by Arnold Dunsterville, 1920 – author].
Three months after returning, he married his long-time sweetheart, Lilian, and joined the ranks of the unemployed. After several jobs, in 1923 Savige became the sales and distribution manager of the Returned Soldiers Mill, and with the assistance of a remarkable secretary became financially secure. At the suggestion of his mentor and friend, Gellibrand, and until the outbreak of WWII, a frenetic, fearsome and fanatical Stanley Savige developed the organisation known as Legacy. His efforts were extraordinary. With belief, incredible zeal and by pure force of argument and character, but no initial capital whatsoever the organisation developed, expanded, multiplied and attended to the needs desires and hopes of ever increasing numbers of war widows and their children.  Legacy was especially helpful initially to returned servicemen in difficulty. Legacy Clubs were formed all over Australia by 1930 and not only in the capital cities.
By 1939 Savige was a Brigadier. During WWII he served in numerous theatres of war in the 2nd AIF. Appointed commander of the 17th Brigade of the 6th Division, he was involved in the capture of Bardia, Tobruk and Benghazi. The 17th Brigade was the last brigade of 6th Division to arrive in Greece, and were involved as part of the rear-guard in the subsequent withdrawal. Some of the 17th ended up on Crete and were involved in the battles there. The 2/6th and 2/7th Battalions were more than decimated in terms of further war service – many became prisoners of war. Savige then was given charge of a composite Brigade involved in the Syrian Campaign. By guile and skill this unit outflanked the French and greatly contributed to the overall victory. Following this Savige returned to Australia as Director of Recruiting, one week after Japan’s entry into the war. He was appointed Major-General upon his arrival. Eventually given command of the 3rd Division, a former Militia unit with officers mostly of his own choice – which caused subsequent problems for him – he devoted his time to training these very young men, a task for which he was extremely well fitted.
In April 1943 Savige was in New Guinea. His units consisted of AIF, Militia and American troops with significant air support. They were especially involved in the capture of Lae and Salamaua. Malaria and hookworm slowed him down on return to Australia. In December 1943 a Jungle Warfare School was set up in Queensland with Savige in charge and in March 1944 he became Lieutenant-General Savige in command of 1 Australian Corps.  This Corps of over 30,000 personnel was involved in various areas of the South Pacific until the war’s end. He was then appointed Co-ordinator of Demobilization and Dispersal, a mammoth task as there were 595,740 personnel in all the services. Other onerous appointments followed, including Chairman of the Central War Gratuity Board and Government Representative (Military) in consideration of POW Claims. In addition he had resumed his business and Legacy activities.  In 1950 Savige was knighted by the King. In May 1954 Lieutenant-General Stanley George Savige, CB, CBE, DSO, MC, ED died of heart failure and Australia lost one its truly remarkable men. His legacy is the spirit of Legacy today.