(Which includes the roll of all who served)
When Major Alexander Thorneycroft of the Royal Scots Fusiliers was asked to form a mounted corps in November 1899 he little realized that the unit which would bear his name would be known as one of the finest irregular mounted units raised during the war.

Formed in Natal Colony at the height of the Boer advance, it was sent to the Tugela front to assist in the relief of the siege of Ladysmith. It fought in all the battles along that front including the infamous struggle for Spion Kop in January 1900 which cost the unit over 80 casualties. It participated in the relief of Ladysmith and in driving the Boers out of Natal.

For the remainder of 1900 it operated in the south-eastern Transvaal and the eastern Free State. It participated in the great chase of Boer General Christiaan De Wet in the Cape in February 1901 and spent the remainder of the year chasing guerillas in the south-eastern Free State. At the end of the year it was sent after Boer generals Smuts and Hertzog when they invaded the Cape Colony. For the first half of 1902 they were back in the Free State until called north in May 1902 for the last of the drives in the Western Transvaal.

There is much that is new and unfamiliar here. The British strategy in securing the safety of the Natal railway line through the eastern Transvaal and the emergent Boer leaders in this part of the country; the ineffective chases of De Wet through the Free State by British columns; the frustrating campaign against Smuts and Hertzog in the Western Cape; the time-consuming and sometimes futile operations in the south-eastern Free State, will not be familiar phases in the war to most readers. Add to that a detailed study of the T.M.I on Spion Kop and a scrutiny of Thorneycroft’s leadership there, a matter on which even Lord Roberts had an opinion, and the history scholar is given many fresh perspectives.

The T.M.I attracted volunteers from a large number of countries; over 1600 men passed through its ranks. There were many odd characters: there were lords of the realm, big game hunters, ex-Jameson Raiders, rogues and rascals (one man was suspected of later stealing the Irish Crown Jewels), but by and large the men were decent fellows from all walks of  life who tried to do their duty. Over 200 Australians served in the T.M.I and over 25 New Zealanders, and even a dozen Americans. Most were from Britain and the South African Colonies of Natal and the Cape. For a unit that was to have 200+  casualties there is quite a story to tell. A roll of all 1600+ men who served has also been included.

The history is profusely illustrated with photos (many of which have never been published) and enough maps to satisfy the geographers who like to know where on earth the unit was operating. 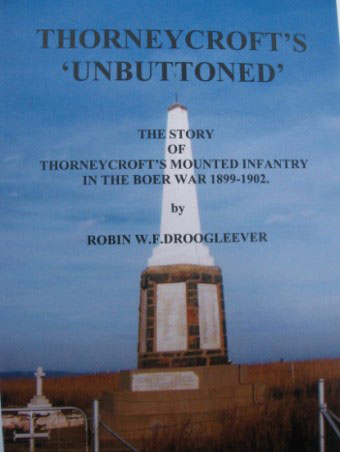