James Wood was born on 31 January 1937 at Neutral Bay, Sydney. He was educated at Sutherland Intermediate High School and matriculated as an evening student at St George Technical College.
In 1957 Jim enlisted in the newly raised 1st Commando Company (Citizen Military Forces) thereafter qualifying for his Green Beret, as an army parachutist and across the range of specialist skills and courses required of members of the unit. 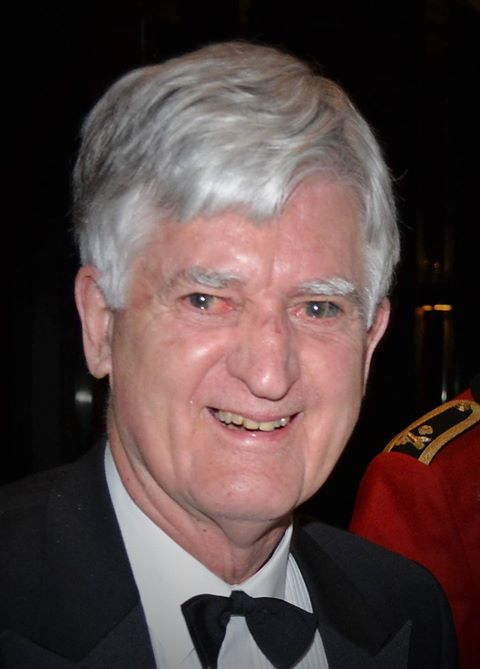 Winning a scholarship he completed a two year junior secondary training course at Sydney Teachers’ College. Jim was then appointed to the staff of Cleveland Street Boys’ High School teaching English and History while studying in the evenings at the University of Sydney. In 1960 he married Colleen.
Progressively promoted through the non-commissioned officer ranks in the 1st Commando Company Jim earned his commissioned as a Second Lieutenant in 1961. Jim then held platoon commander appointments and, when the unit was reconstituted as 1st Battalion, City of Sydney’s Own, was promoted to captain and served as a company commander.
When Jim graduated from the University of Sydney with a Bachelor of Arts degree in 1967 he was offered a civilian appointment with the Department of Defence in Melbourne. Between 1967 and 1984, Jim held a range of civilian appointments with the Departments of Defence and Foreign Affairs, with postings in Canberra, Melbourne, Jakarta (Embassy and Political), Hong Kong (Headquarters British Forces) and Tokyo (Embassy, Counsellor and Political).
While serving in Hong Kong Jim completed a Master of Arts degree in Comparative Asian Studies at Hong Kong University. During his time in Australia, he examined ‘International Security Aspects of Australian Defence Policy 1945-49’ at Deakin University for which he was awarded a Doctor of Philosophy.
When in Australia Jim continued his Reserve service in a range of appointments. He served as the Commanding Officer of the Melbourne University Regiment from 1979 to 1981 and was the first Army Reserve officer to be granted a Defence Fellowship, resulting in a year on full-time duty researching Army mobilisation programs, both in Australia and overseas. Jim summarised his findings in a Department of Defence publication Mobilisation: An outline record of its origins and Development in respect to Land Forces.
In 1987 Jim and Colleen decided to settle permanently in Melbourne and Jim re-entered the Victorian education system as a secondary school teacher. He completed a Bachelor of Education at Monash University and was later the Head of English at the Fairhills High School. Jim was also the Coordinator of the Bright Sparks Committee responsible for promoting the education of gifted and talented students in state schools in the Knox District.
Jim’s final military appointment was as Colonel Project Officer at the Command and Staff College in Queenscliff where he updated his studies of mobilisation in the light of the recent Gulf War. Jim retired as a citizen soldier in 1992, after 37 years of service.
Jim’s first book The Forgotten Force: The Australian Military Contribution to the Occupation of Japan 1945-1952 was published in 1998 and his second Chiefs of the Australian Army: Higher Command of the Australian Military Forces 1901-1914 was published in 2006. In 2008 Jim was commissioned by the Australian War Memorial to produce an online article on ‘The History of the British Commonwealth Occupation Force in Japan.’
Jim contributed three entries to the Australian Dictionary of Biography and also contributed to Peter Collins’ Strike Swiftly: The Australian Commando Story; A Most Unusual Regiment by Maurice Ryan, and Occupying the ‘Other’: Australia and Military Occupations from Japan to Iraq edited by Christine de Mateos and Robin Gerster.
Jim represented the interests of service personnel with oral and written submissions to nine federal parliamentary and official inquiries into defence, military and educational issues, including major submissions to the Millar Enquiry into the Citizen Military Forces, the Gration Committee of Inquiry into Defence and Defence Related Awards and the Clarke Review of Veteran’s Entitlements.
Jim retired from teaching in 2010 and continued his research and writing on Australia’s military history. In 2014, he prepared, in support of British Commonwealth Occupation Forces veterans and civilian medical and nursing staff who served in Vietnam, a major reference text entitled Australia’s Forgotten Force – Case Studies – Justice delayed is Justice denied.
Jim was an inaugural member of the Royal Victorian Regiment Council and an inaugural Vice-Patron for Military History and Heritage Victoria Inc. He was also a former Deacon of the Collins Street Baptist Church.
Jim passed away on 30 June 2017 and is survived by Colleen and their three children.