Mac Gregory was born in Geelong on 9 February 1922. His father was a member of the RAN based at Osborne House in Geelong and working with the J-Class Submarines. Mac joined the Royal Australian Naval College at HMAS Cerberus in January 1936 as a 13 year old Cadet Midshipman. 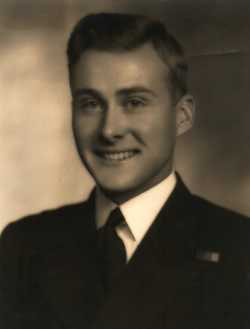 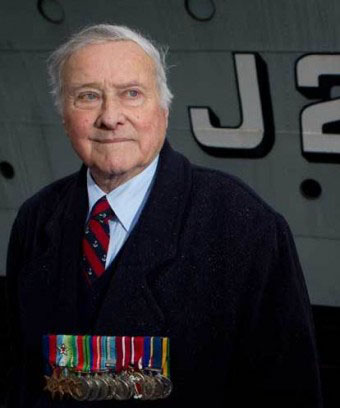 As World War II approached, in August 1939 he was sent to sea aboard HMAS Canberra and then HMAS Australia – the RAN’s County Class 8 inch cruisers. He served in Australia in the Pacific, Indian and Atlantic Oceans as well as the Mediterranean Sea.

On leave in Melbourne in late 1941, at the age of 19 and following the Japanese attack on Pearl Harbour that brought the United States of America into the war, Mac became engaged to Gladys – a childhood friend.
In 1942 Mac witnessed the Japanese submarine attacks on Sydney Harbour. Later that year he was serving on board HMAS Canberra which formed part of a combined task group for the US-led recapture of Guadalcanal. He was officer of the watch when Canberra was attacked by Japanese warships in the opening salvos of the Battle of Savo Island on 9 August 1942.

He later relayed that “It was 1.43 a.m. when it all started. I could see six Japanese cruisers plus a destroyer 3,000 yards away blasting away at us with 8 inch guns and torpedos.” He remembers saying – “My God, this is bloody awful.” More than 80 Australian sailors died or were mortally wounded as Japanese shells slammed into the ship, which caught fire and was later scuttled. Clutching his officer of the watch issued binoculars he would lucidly tell the story some 70 years later and conclude with the reflection “I was very fortunate.” 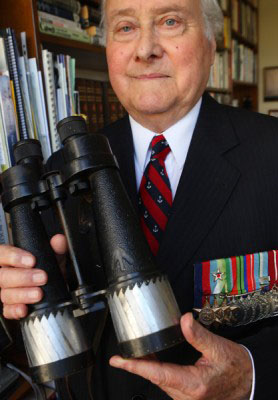 Mac also witnessed more than 200 kamikaze attacks during World War II, but on 6 January, 1945, one of the Japanese suicide planes was headed right for his ship. “I looked up into the sun and there was this plane flying toward us” he later recalled. “We all flattened down on the deck and there was this big explosion. I was splashed and I thought it was fuel, but then I smelt it and realised it was saltwater. The kamikaze had been shot in half [by one of the ship’s anti-aircraft gunners]; one half fell starboard and the other half fell port side. Once again we were very lucky.”

Mac was serving in HMAS Shropshire from where he witnessed the Japanese surrender at Tokyo Bay on 2 September 1945. Anchored off Yokohama, and with Shropshire assigned to ‘occupation duties’, Mac revelled in surviving the War by touring Tokyo and surrounds in a jeep he had acquired in exchange for two bottles of whiskey.

Mac and Gladys married in December 1945.

It was the German U-Boat menace that almost brought Britain to her knees in two world wars and immediately after the War, Mac completed the first combined Torpedo Anti-Submarine Specialist course in the UK with the Royal Navy. Mac would later relate that:

We spent time learning the tricks of our enemy, submerged in a submarine, back on the surface in an Escort ship, we learned how to hunt and kill them. It went on by day and on by night, we became very clever at finding contact with the supposed enemy sub, maintaining that contact as she tried to slip away, then to move in and sink the quarry with our ahead throwing weapons.
We tried out tactics for convoy protection with a game on the tactical floor that went on over a week. You had to take all positions on, one day commanding an Escort, the next as the Convoy Commodore etc. The devasting arrival of a smiling WREN with the news “You are sunk, Sir! You will take no further part in this exercise” was to be studiously avoided.

With this new specialist qualification he served in the destroyers HMAS Warramunga and HMAS Bataan, as well as at Navy Office. From 1950 to 1953 Mac was appointed Aide-de-Camp to His Excellency the Governor General of Australia – The Right Honourable William John McKell, GCMG – at Government House in Canberra.

In his final posting, Mac served as the Fleet Torpedo Anti-Submarine Officer on the staff of the Flag Officer Commanding the Australian Fleet, in the aircraft carrier HMAS Vengeance. Vengeance escorted the Queen’s visit around Australia in 1954 and as part of that responsibility produced a Queen’s guard for ceremonial occasions. Mac commanded the Queen’s guard when she visited the Australian War Memorial in Canberra. In September 1954, after 20 years of service and at age 33, he resigned his commission.

After retirement from the RAN, Mac worked in the private sector for Rheem, Luxaflex, W.R. Grace. He then became a hospital administrator and later worked in the family business – Moorcroft Australia. He and Gladys raised their four children and Mac retained a keen interest in naval and military history. His wealth of naval knowledge and his network of contacts in the naval world were remarkable. His website – Ahoy – Mac’s Weblog – contains a wealth of valuable historical information. It is dedicated to all “Who went down to the sea in ships” in World War II in whatever capacity they may have served the cause of freedom, but especially to the 84 Officers and Men who died on board HMAS Canberra at the Battle of Savo Island on the 9th of August, 1942.

In 2001 Mac was invited to attend the ceremony to mark the 50 anniversary of the signing of the ANZUS Treaty in Washington D.C. On 10 September 2001 Mac was mentioned in both George W. Bush’s and John Howard’s speeches. After the ceremony John Howard invited the Mac and his second wife Denise to join him the next day to visit the grave of the only Australian serviceman buried in Arlington Cemetery.

Mac and Denise accepted the invitation and amended their travel arrangements. But the visit never went ahead as the al-Qaeda attacks on New York and Washington D.C. unfolded on the morning of 11 September 2001. Instead of going to the cemetery, Mr Howard was taking shelter in a cellar under the Australian embassy, while Mac and Denise were stuck in their hotel. “It was very frightening. Washington just went mad. There were fire trucks, police cars everywhere, FBI, CIA, helicopters chopping around overhead. It was mayhem.” Mac would later relay to a reporter.

The next day the Mac and Denise learned that the flight that they would have left Washington D.C. on was American Airlines Flight 77 which was crashed into the Pentagon without any survivors. “By inviting us to visit Arlington, John Howard had caused us to be pulled off that flight and he thus saved our lives.” Mac recalled. “It was an incredible experience. You couldn’t have any more luck than that.”

Mac’s life was rich in experiences, and his wisdom and grace were widely respected within many circles. As the Vice-President of Military History and Heritage Victoria, Mac was a tremendous supporter and magnificent ambassador for the organisation.

Mac Gregory died on 27 August 2014. In accordance with his express wishes there was no funeral and no memorial service. Mac was cremated on 1 September and his ashes were scattered from the end of Station Pier, Port Melbourne at high tide on 3 September in the presence of his immediate family.

Station Pier was a very special place for Mac as it was from there that he sailed out of Melbourne as a 17 year old Cadet Midshipman in 1939 to begin his seafaring adventures. After 20 years of effort Mac had also recently received news that a project he initiated to erect a statue of a sailor with his kitbag at the end of Station Pier in memory of the thousands of naval personnel who embarked there for service in WWII will be fully funded and would be realised.

Mac is now forever in his beloved sea, sailing with the tide. He is survived by his second wife Denise and his children from his first marriage to Gladys, Jayne, Anne, Sue and Raymond as well as his grandchildren, Amelia, Rupert and Alexander.