Victoria at War 1914-1918 By Michael McKernan is another coffee table book on the First World War. I seem to have read so many over the past months, and based on the amount of money planned to be expended to commemorate the landing at Gallipoli and the AIF actions in France I’m expecting to be seeing many more.

Michael McKernan has published many books on military history and this latest is another example of the great energy and detail he puts into his research. He was commissioned to produce Victoria at War 1914-1918 by the State Library of Victoria with funds provided by the Victorian Government.

McKernan’s book is a good read and specifically covers Victorian families who made a heavy personal contribution to the Great War. The historical detail is excellent and the families who are featured from all parts of Victoria become very real people.

The format of the book follows the predictable time line from Melbourne and Victoria pre-August 1914 to the end of hostilities in late 1918. There are interesting chapters on conscription and Victorian schools during the war.
The photos are all interesting however it seems that every book on WWI use a similar set of AWM or State Library shots. Richard Pelvin’s Anzac: An Illustrated History 1914-1918 uses many of the same military photos. The State Library of Victoria’s photo collection of early Victorian rural life which are used throughout the book are the most interesting.

One area that is unique in McKernan’s book is his reference to the relevance of Victoria as the seat of Federal Government during the period of WWI and the effect and influence this had on the population of Victoria as a State. He puts forward the case that this somehow made Victoria a more patriotic state then other states – which I find difficult to accept and I wonder if he is trying to somehow acknowledge his funder.

McKernan’s book will be a good read for Victorians – particularly if they are not familiar with the history of WWI. Anyone that has some knowledge of the Gallipoli Campaign and the AIF actions in France will find it interesting, but with no startling new information. 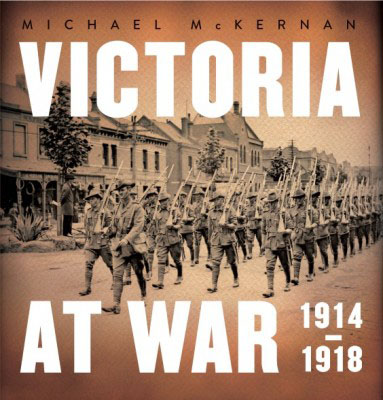