Victoria: Its Role in the formation of the Australian Commonwealth’s Foundation Navy Cont…

MHHV > Articles > Colonial to 1899 > Victoria: Its Role in the formation of the Australian Commonwealth’s Foundation Navy Cont…

Governor Captain Sir Charles Hotham KCB RN arrived in Melbourne on board the Queen of the South, commanded by Captain William Henry Norman (1812-1869), to assume the governorship of Victoria. Sir Charles, acknowledged as one of the ablest officers in the RN, was impressed by Norman and offered him command of Victoria’s new HMCSS Victoria, the first of many ships that were to become part of its colonial navy.
The Victorian Colonial Navy 1856 – 1900
Norman had the honour to be the first of many able Victorian naval commandants: –
Commander W. H. Norman VN, 1862-1869
Captain W. H. Panter RN, 1870-1877
Captain C. T. Mandeville RN, 1877-1882
Captain A. B. Thomas RN, 1882-1889
Captain Fullarton RN 1886 (temporary)
Captain W. F. S. Mann RN, 1889-91
Captain R. W. White RN, 1891-93
Captain G. Neville RN, 1893-97
Commander F. W. Tickell VN, 1897-1900.
In March 1859 the Admiralty established its ‘Australia Station’ in Sydney Harbour, separate from the Far East China Station, commanded by Commodore William Loring, CB (1811-1895) and then in 1860 by  Commodore Frederick Beauchamp Paget Seymour, CB,  RN (1821-1895).
In 1860  Seymour requested Victoria’s support of the British operations against the Maori in New Zealand, by providing HMCSS Victoria.   Victorian sailors were recruited and for a year it served as a despatch vessel to HMS Pelorus. The Victorian Navy also provided armed landing parties and secured a Maori Pa thus becoming the first Australian colonial sailors to have overseas naval service.   The RN praised them for their service but the British government later disallowed the Victorian colonial regulations that gave legal framework to HMCSS Victoria’s operations overseas due to international law considerations.  The participating crew members did receive the New Zealand Medal for their active service.
In 1865 the British Colonial Defence Act permitted colonies to raise their own defence forces, possibly influenced by the commendable service rendered by HMCSS Victoria in the New Zealand War.

From 1867 the colonial Victorian Navy commenced to acquire replacement naval vessels for the defence of the colony.  A three deck sailing ship was permanently loaned to Victoria, HMVS Nelson.  This 126 gun, three deck battleship was loaned as a school-ship but it required Victoria to spend a huge sum, £42,000, to fit it out for training.
This was followed by the region’s most powerful warship HMVS Cerberus, both handed over in this year.   Commander Norman was tasked to go to England to stand by to bring out HMVS Cerberus, but regrettably died in England during construction. HMVS Nelson’s Navigating Officer Lieutenant Panter RN was sent from Melbourne to replace him and brought out the ship in 1870.
HMVS Cerberus, a monitor design of 3340 tons, was dubbed the ‘Monster Class’ by the seamen. She was the most formidable naval vessel seen in Australian waters at that time.     Cerberus retained its status as the major naval vessel of its type and it was only 44 years later, in 1912, that its status was superseded by the new battle-cruiser HMAS Australia.

During 1868 the Harbour Trust Commission obtained vessels which became Naval auxiliary gunboats, while in 1870 Victoria established its own Naval Discipline Act.   The Act saw Victoria raise its Blue Ensign with the emblem of the colony in the fly – a Royal Crown over the Southern Cross.  As part of the deal negotiated in 1866 to obtain capital ships for the Victorian navy, Victoria was to provide a graving or dry dock capable of handling the largest British warship likely to visit. The dock was named in honour of Prince Alfred, Duke of Edinburgh, during his royal visit in 1868. The dock took its first ship, the Victorian battleship Nelson, in 1874.  In 1878 Creswell retired from the RN and arrived in Australia.
In 1882 Victoria appointed its first full-time naval commandant, Captain Alan Brodrick Thomas, RN (1844-1894).  In 1883 Victoria formed a Council of Defence under a minister of defence, with five chief officers of the different branches of the colonial Victorian public service.  The colonial Governor retained command of the permanent naval forces of Victoria.   New regulations were also promulgated for Victoria’s naval reserve at Williamstown and Port Melbourne with headquarters at the Williamstown Naval Depot.
By June 1884 the following naval vessels were acquired to ensure Victoria’s seaward defences were strengthened:
HMVS Childers I, a 63t 1st class torpedo boat.
HMVS Victoria (II),a 530t 3rd class gunboat.
HMVS Albert, a 360t sister ship to Queensland’s Gayundah and Paluma.)
HMVS Batman and Fawkner, 387t naval auxiliary gunboats.
HMVS Lonsdale and Nepean, 2nd class torpedo boats, each 12.5t.
HMVS Gannet, a 246t, 12kt auxiliary paddle steamer gunboat and
HMVS Countess of Hopetoun, a 1st class torpedo boat of 75t.
Russian war scares in 1885 saw Swan Island become a Submarine Mining Depot.  SS Miner, a Military Torpedo Corps (MTC) minelaying vessel, was berthed at Williamstown depot along with old MTC prison hulks Sacremento and Deborah, acquired in April 1878.   The MTC were responsible for laying buoyant and ground mines with control test rooms sited on Port Phillip’s South Channel fort and in the South Channel pile lighthouse.
In 1886 the MTC was renamed ‘Submarine Miners’ and were supported by Victoria’s Navy with its defence vessels HMVS Cerberus, at the Pope’s Eye, HMVS Nelson at the South Channel fort  and HMVS Batman, Fawkner and Gordon in the West Channel of Port Philip.    Swan Island Depot stored Whitehead torpedoes.  Meanwhile in 1889 the Vulcan was built at Williamstown for the Submarine Miners, and this operated until 1908 when it was replaced by a second Miner. 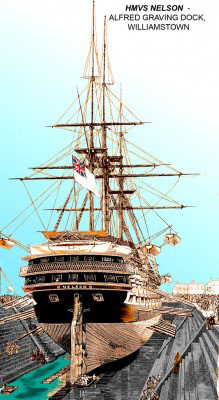 Observation Point in Port Phillip served as a Torpedo Station while naval support for these operations and facilities was provided by the torpedo boats HMVS Nepean, HMVS Lonsdale and HMVS Countess of Hopetoun.
Anti-ship defence mining was at the entrance to Port Phillip, and command of coastal harbour defences shared by Victoria’s local naval and MTC officers, under the overall control of the Victorian Defence Department.
To be Continued in the Article section Boer War to 1914…