Victoria: Its Role in the formation of the Australian Commonwealth’s Foundation Navy Part 3

MHHV > Articles > Boer War to 1914 > Victoria: Its Role in the formation of the Australian Commonwealth’s Foundation Navy Part 3

…in the late 1880s Australia lay at the extreme end of the world’s sea routes, an island continent with no foreign land boundaries, and open to attack only by sea.   Great Britain’s supremacy at sea and her effective control of sea routes narrowed the range of attacks to raids by commercial-raiding cruisers, cruisers of a gun-power capable of menacing unprotected seaports.

This resulted in the South Australian Parliament reviewing its position.  Creswell saw that Australia’s isolation needed Australians to defend themselves.  In 1888 he published further comments, this time about Victoria’s Navy, which by that time had nineteen naval vessels:

…the naval force in Victoria was not treated in quite so cavalier a fashion as in the other colonies.   A better instructed public opinion existed in Victoria, due in large measure to the ability of their commandants, who were appointed from the active list of the RN, some having forceful personalities as well as being effective public speakers.

…with its navy supreme and unchallenged on all of the seven seas, Britain neither asked for nor desired naval aid from overseas.”  “Admiralty….was capable of an obstinate resistance of unhallowed tradition; an obduracy, inflexible and implacable, against which ordinary mortals beat their knuckles in vain.   Admiralty was entrusted with the task of defending the Empire.   It neither desired nor would tolerate a family of infant navies overseas, and so resolutely set its face against providing a nursery for brats.   Colonial control for them spelt dual control.

Creswell’s comment was timely for Federation discussions were being seriously debated.

In 1900 the Williamstown Naval Depot mustered the Victorian contingent for China under the command of Commander Frederick Tickell VCN, being sent in support of Britain, restoring peace after the Chinese Boxer uprising.  Tickell’s Victorian contingent was supplemented by NSW personnel to form a joint colonial naval force under his command.  The contingent  returned in May 1901, highly commended by both the British Army and RN for their efforts with particular reference to their kind treatment of the civilian population.  These colonial sailors left as colonials but returned as the Commonwealth of Australia’s first naval returned servicemen.

The Commonwealth of Australia, created on 1 January 1901.  Eight weeks later on 1 March 1901, all former colony, now State, based defence force personnel and materiel were constitutionally transferred to the new Commonwealth Department of Defence to found the new Commonwealth Naval Force (CNF). The CNF comprised 239 permanent personnel, with Victoria supplying two-thirds of these career trained naval personnel and 1348 Naval Brigade, casual and Volunteer, members.

The CNF foundation fleet comprised 14 vessels: six from Victoria, four from Queensland, two from South Australia and two from New South Wales.   The former colonial Victorian Navy’s reference to their vessels as HMVS, was soon adopted in the new Australian Navy but as  HMAS with sailors’ hat tally bands labelled in the same way.

Melbourne at this time hosted Australia’s Governor-General, the CNF, Navy Office, the Commonwealth Public Service and Federal Parliament.  Navy Office remained in Melbourne until 1959 when it relocated to Canberra.

Captain Creswell, both naval officer commanding the CNF and naval commandant of Queensland, worked closely with Prime Ministers Edmund Barton and Alfred Deakin in planning for Australia’s future navy even though the RN had rejected his report on Australia’s sea defences.  The RN wanted to remain the single controlling naval authority in the British Empire.

In December 1904 Creswell was appointed as Australia’s first Navy Director and a Naval Member on the Australian Commonwealth Naval Board (ACNB) of Administration as well as a member of the Federal government’s new Council of Defence. Captain Collins handed over his 30 month interim control of the Australian Navy to Creswell. 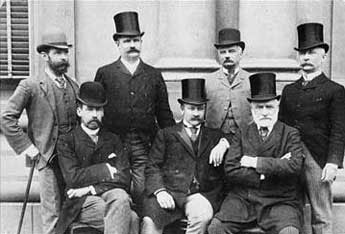 Following Creswell’s unceasing advocacy of the need for new warships, the first two, HMAS Yarra and HMAS Parramatta arrived in Melbourne in December 1910 and placed under the overall command of Tickell.  1911 was a year of significant naval events.  On 1 March Creswell was knighted and promoted to rear admiral, and appointed 1st Naval Member of the restructured Australian Commonwealth Naval Board (ACNB).

Compulsory training of young boys aged 14 to 17 years of age commenced at Williamstown Naval Depot’s drill hall, with 800 youths being inducted and supervised by Commander Richardson.  The first wireless mast raised on Williamstown Naval Depot’s drill hall permitted wireless communication with Sydney and the Imperial RN Fleet, for the first time and with Navy Office at 460 Lonsdale Street, Melbourne.   In July the Australian navy received the Royal patronage of HM King George V and the title ‘Royal’ was approved – the Royal Australian navy (RAN) was born. It was allowed to also fly the RN’s White Ensign, that  was flown at Trafalgar and adopted by the RN in 1864 as its sole ensign.   In November the RAN’s first diving school was established at the Williamstown Naval Depot when the steamer SS Marere arrived from England with a complete set of diving equipment.  Captain Tickell CMG was appointed Director Naval Reserves.

The Williamstown Naval Depot ran out of training space and so an old sailing ship SS Sabroan was anchored in Sydney Harbour and commissioned on 25 April 1912 as HMAS Tingira, as a recruit training vessel.

On 5 August 1914 World War One began. The Australian naval expeditionary force was mustered at Williamstown and sailed with its military component for German New Guinea, landed capturing it by 17September that year.  After the war, in 1921 the Williamstown Naval Training Depot’s training role was transferred to the RAN’s newly national naval training centre, Flinders Naval Depot, (HMAS Cerberus) at Westernport, Victoria.  The colonial Victorian naval forces had more than honoured its motto: ‘Deeds not Words’.