Victoria: Its Role in the formation of the Australian Commonwealth’s Foundation Navy

MHHV > Articles > Colonial to 1899 > Victoria: Its Role in the formation of the Australian Commonwealth’s Foundation Navy

Victoria, formed as a British Colony 161 years ago, was to become the ‘Cradle of the Australian Navy’, the base from which the Commonwealth Federation developed its formidable Australian Naval Force.  The ANF received Royal Patronage in 1911 and became known from that date as the Royal Australian Navy (RAN).
In the 44 years from 1856-1900 the Victorian colonial government purchased fourteen (14) new naval vessels, and was supported by an efficient colonial administration.  Victoria’s vessels, comprising yachts, launches, tugs, barges, schooners and a training hulk,  all acted as armed auxiliary vessels of the colonial Victorian Navy.
Victoria’s navy recruited and effectively trained its own permanent personnel. It soon became Australia’s leading colonial naval defence force with naval ships and personnel outnumbering all other Australian colonies combined.    The Victorian naval force was well managed by eight high-calibre, experienced Royal Navy officers who served as Victorian Naval Commandants between 1856 and 1900.   Commander Frederick Tickell (1857–1919), the last commander of Victorian Naval Forces, in the early years after Federation in 1901became the right hand man to the first commander of the Commonwealth Naval Forces Admiral Sir William Rooke Creswell (1852-1933). 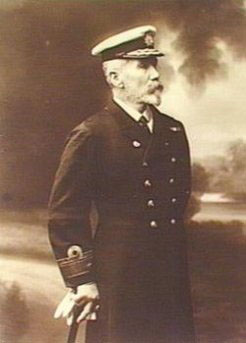 The early history and origins of the Victorian colonial navy.
In 1851 Victoria separated from New South Wales. Its Lieutenant-Governor, former Port Phillip District  Superintendent,  Charles Joseph La Trobe (1801–1875) started Victoria down the pathway of naval defence in response to mounting concerns for lack of port security in Port Phillip, as Royal Navy (RN) ships from the Admiralty’s China Station rarely appeared and when they did it was a short visit.   Huge amounts of gold were accumulating in Port Phillip as ships arrived but did not sail when their crews deserted for the goldfields.  The theft of gold bullion from a ship underlined the Legislative Council’s concerns. Latrobe was supported in seeking naval support by William Lonsdale (1799–1864), his colonial secretary and later colonial treasurer and the Hugh Culling Eardley Childers (1827–1896), a member of the Victorian Executive Council.
In 1854 La Trobe’s constant appeals to England for a naval presence saw the Admiralty send HMS Electra to Port Phillip but by 3 March 1854, the Victorian colonial government’s Select Committee on Defence reported –
HMS Electra is ill adapted to the efficient protection of the large and increasing trade of the port, owing to her being a sailing vessel.
Lieutenant-Governor La Trobe’s patience reached an end and supported by Lonsdale he obtained the colonial government’s approval to place an order to purchase a new armed warship.  La Trobe added a ‘without delay’ postscript to the order further emphasise the urgency they felt.   This order was honoured by the British Government and Admiralty and it became the first warship ever provided to a British colony.   La Trobe retired and his vice-regal replacement, Captain Sir Charles Hotham KCB RN (1806–1855), immediately reviewed the warship order and increased the funds for the ship’s construction from £13,000 to £38,000.    It was named ‘Her Majesty’s Colonial Steam Sloop (HMCSS) Victoria’. At the launching Lady Talbot commented that ‘this event marks the foundation of a great navy in the Southern Seas’, a prophetic statement as the future was to demonstrate.
The twenty year period prior to La Trobe’s order for the construction of a new warship had seen many significant RN ship design improvements. Francis Pettit Smith’s (1808–1874) revolutionary screw propeller design alone had rapidly changed naval and merchant shipping design and operations and further enhanced Britain’s stand-alone sea power prominence over the following 50 years.   Naval ships now had improved steam engines, water distillation at sea, tinned food, ship’s accommodation heating, with steel hulls still under development.   Victoria’s first warship HMCSS Victoria would benefit from having most of these innovations, except for a steel hull, built into its design.
An examination of these advances in technology in the RN between 1835 and 1855 demonstrates how fortunate Victoria was in having the warship constructed at this point in Britain’s industrial revolution when so many new inventions were being tested and introduced into the British navy:
In 1836 Smith designed and patented his new revolutionary screw propeller which was mounted at the stern of the vessel below water level and driven by the ship’s steam engine.  By 1839 the Admiralty trialled Smith’s invention in the 237-ton HMS Archimedes, achieving 9 knots just when side-lever steam engines originally designed by James Watt (1736-1819) were still being installed in 100 Royal Navy paddle-wheel warships.
Smith’s first commercially successful screw propulsion system design was a major turning point in maritime history.   Engineer officers now became part of the crew making their contribution to technological advances in the RN.   1839 saw researchers in the USA discover tin alloys and high speed marine phosphor bronzes for bearings, ensuring the success of Smith’s screw propeller design.
The health of ships’ crews also benefited as distilled fresh water became a practical reality using heat from ships’ installed steam engines and by 1847 tinned food was starting to be introduced in ship supplies assisting in managing diet to control the incidence of scurvy.   The 1850s saw crew deaths from the dreaded scurvy almost eliminated. However yellow fever, transmitted by mosquitoes, remained a major hazard for the next thirty years until vaccines were developed in 1880.
Other developments were steam driven ventilation fans, cold storage compartments and better general ship heating for the crew.
All this available technology was now being built into the design and construction of Victoria’s new warship – HMCSS Victoria. These developments were also to become the basis for most future ship quality design.   Colonial Victoria, the wealthiest colony in the British Empire was now the first to order, pay for, and receive, its own modern armed naval vessel.
To be continued…