Walter Tunridge was born on the 2 November 1856 at Dover in Kent, England. His father John Nicholas Tunbridge was listed as a master bricklayer in 1861 and later in life became a builder and building speculator. The family was large and Walter had two brothers and four sisters. Walter was sent to boarding school early in his life and at 14 was studying at the public school in the village of Eythorne in Kent.

In 1884 he sailed for Australia on the Duke of Argyll and arrived in Brisbane on the 11 November 1884. He moved to Townsville and established an architectural practice later that decade. His brother Oliver joined him in the practice in Townsville early in the 1890’s. By 1900 the business had expanded to include civil engineering, architecture, and surveying and had thrived and became very prominent in North Queensland.

Walter was commissioned in the Mounted Infantry, Queensland Land Forces in February 1889 and was promoted to Lieutenant in December 1889. He was called out for the protection of non-union labourers in the 1891 shearers strike at Charters Towers. He did well and was promoted to Captain in 1892. His part time military career progressed fast and by 1898 he had been promoted to Major with the Queensland Artillery (Townsville) Garrison Battery.

Tensions in South African continued to develop in 1899 and Queensland was the first colony in the British Empire to offer troops to Britain in the event of war. When war was declared on the 11 October 1899, the first two Queensland volunteer contingents were sent within weeks. On the 1 March 1900, Walter, now a Major, was appointed CO of the 3rd [Queensland] Mounted Infantry Contingent. This contingent left Brisbane on the SS Duke of Portland with Walter plus three captains, five lieutenants, and 156 other ranks plus several hundred horses bound for South Africa.

The Duke of Portland was a cargo ship of 3822 tons and was only 106 feet long and 14 feet wide so the voyage was no pleasure trip. They stopped at Albany, Western Australia in transit and reported the loss of 18 horses due to rough weather in the Bight, and two soldiers were put ashore with illness. Their transport landed at Beira a seaport in Portuguese East Africa (now Mozambique) in early April.

Walter Tunbridge’s period in South Africa was packed with hero events. He was a senior officer in the siege at Elands River in August 1900 when 500 Colonials including 150 3rd Queensland Mounted Infantry, 100 NSW Bushmen, 75 Rhodesians and a smattering of Victorian and WA Bushmen held off a force of some 2500 to 3000 Boers for 12 days from the 4 August to 16 August 1900, while protecting 90 supply wagons. As the defenders’ ammunition depleted, their Imperial officers wanted to surrender to the Boers, but the Colonial officers, including Walter, insisted that they hold on. Finally, Lord Kitchener’s column of over 10,000 men appeared on the horizon and the Boers retired. During the siege the defenders lost 12 men killed and 38 wounded.

The 3rd Queensland Mounted Infantry unit moved north and in November 1900 was involved in a major action at Rhenoster Kop just north of Pretoria. Major Tunbridge was also engaged in a major action at Swartz Kopje on the 12 February 1901 and was mentioned in despatches for conspicuous service. The 3rd Queensland Mounted Infantry then formed part of a column charged with pursuing a Boer force commended by Christiaan De Wet, one of Boers’ leading Generals. They tracked him into the Cape Colony but failed to capture him when he crossed back into the Orange Free State. In between these specific actions the days are spent implementing the scorched earth policy of first Lord Roberts and then General Kitchener.

The 3 rd Queensland Mounted Infantry returned to Australia on the 13 June 1901. They travelled on the SS Morayshire bound for Brisbane. An indication of the strength of character of Major Tunbridge was displayed on this return trip. An ugly incident occurred when 10 troopers were given 43 days in the cells for refusing to holystone the deck. Freed by 20 of their fellows, the released men reported to Major Tunbridge who proceeded to call all the troops together and read the Mutiny Act and defied any man to make a move to harm him. The solders dispersed and the released men returned to their cells voluntarily.

Major Tunbridge’s military record during the South African War was outstanding and he was one of only five Queenslanders awarded a CB. He was mentioned in dispatches, London Gazette April 16 1901, and was awarded the Queens Medal with five clasps.

He returned to Townsville after the War, but did not remain long. He sold his business to his partner, a Mr C.D. Lynch, as his brother had already left the business in the mid-nineties to pursue a full-time Military career. In 1902 he was appointed Aide-de-Camp to the Governor General. He married Leila Emily Brown at All Saints Anglican Church in Brisbane on the 7 April 1904. He was 48 and she was 26. He had a run at politics in 1906 and stood for the seat of Herbert in North Queensland without success. He moved to Melbourne in 1904 and started practicing again as an architect. In 1909 he was living in Malvern Road, Toorak with his wife and two children: Villiers John who was born in 1905 and Leila Jill born in 1909. In the 1909 census he was listed as an architect. In 1914 Walter is admitted to the Athenaeum Club as a non-elected member.

At the outbreak of the First World War Major Tunbridge was on the unattached list. In August 1914 at the age of 58 he became censor for the Third Military District and on the 17 August he was appointed a Lieutenant Colonel in the AIF. Tunbridge was given the command of the 1st Australian Division Ammunition Park (mechanised transport) and commissioned to raise the unit’s six officers and 468 men.

With a limited knowledge of mechanical transport in supply services he nevertheless inspected and purchased some 200 vehicles with appropriate workshops and spare parts. He embarked with his unit and equipment for London on the SS Ceramic on the 22 December 1914 and arrived in London in February 1915. Due to a lack of spare parts for the collection of different vehicles he purchased in Australia, they were replaced by a standard British lorry. His ideas on mobile workshops were greatly admired for their ingenuity and were retained and expanded.

The unit was renumbered as part of the British Army (300th and 301st Mechanical Transport Companies ASC, AASC) and sent to France. On the 2 May 1915 Tunbridge assumed command of a reorganized British V Corps Ammunition Park.

He remained with V Corp mainly in the vicinity of the Ypres Salient until the arrival of the Australian divisions in France . He was then appointed the commanding officer of the 1st Anzac Corps Ammunition Park on the 25th April 1916. On the reorganisation of the supply columns and ammunition parks in January 1917 he was appointed senior mechanical transport office of 1st Anzac Corps. At the height of the Third Battle of Ypres in September 1917 his responsibilities were extended to cover the whole of the AIF in France. On 1 June 1918 by AIF order 344, Tunbridge was appointed Colonel for ‘meritorious work rendered in active service during the present war’.

Between the end of the war and 1920 Tunbridge undertook a number of military roles in London, France, and Belgium. On the 28 October 1919 he proceeded to France as Director of Mechanised Transport Service and returned to London on the 10 December 1919. He was awarded a CBE for his war services and was mention in despatches three times by General Sir Douglas Haig on the 14 July 1916, 5 June 1917 and 16 March 1919.

He embarked at London on the SS Friedrichstine on the 22 January 1920 and arrived back in Melbourne on the 9 March 1920 at the age of 64. He travelled with his wife and three young children who were all living in London during his war service. He settled back into life and continued to practice as an architect in Melbourne. On the 11 October 1943, aged 87 after an exciting and very satisfying life he died at his home at 36 Berkeley Street in Hawthorn. 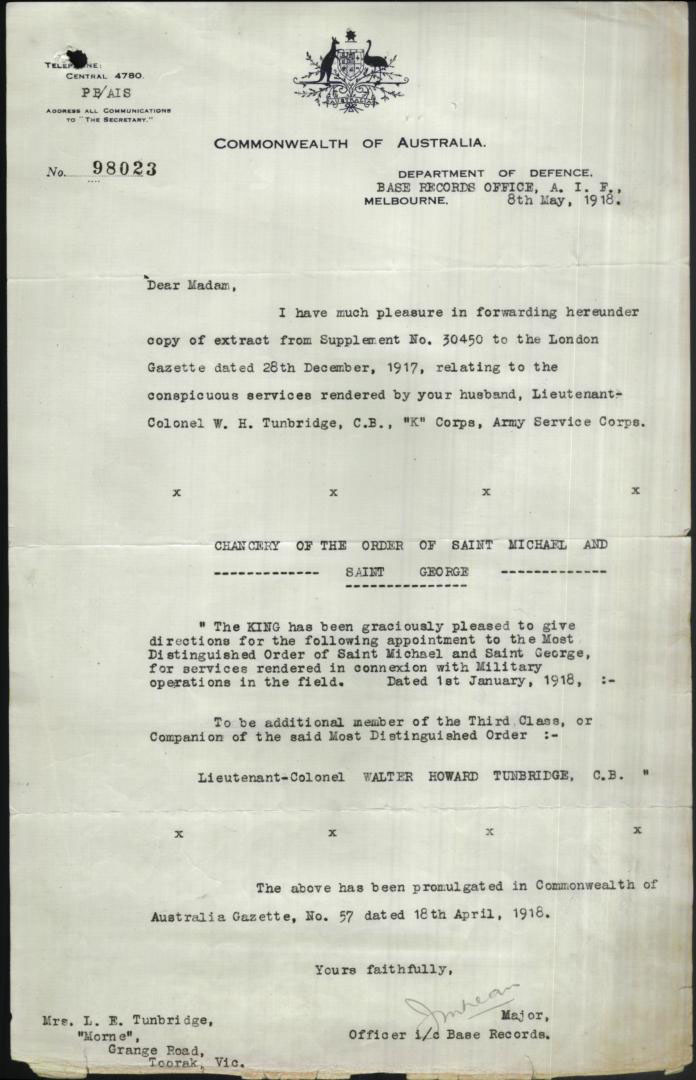 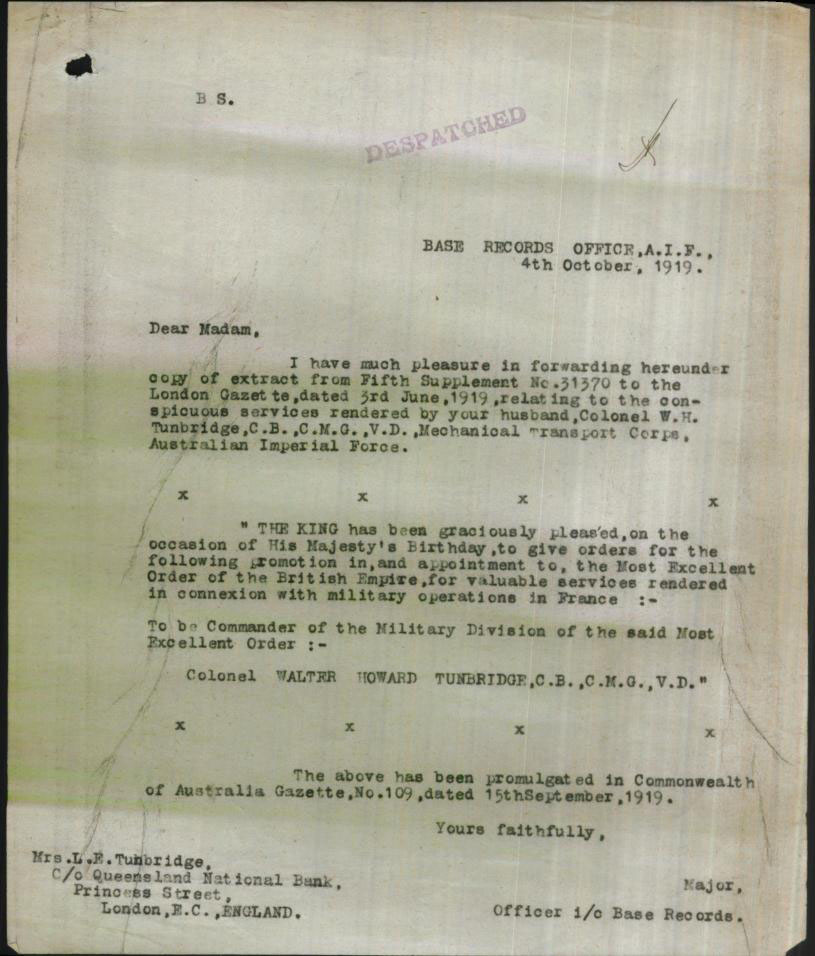 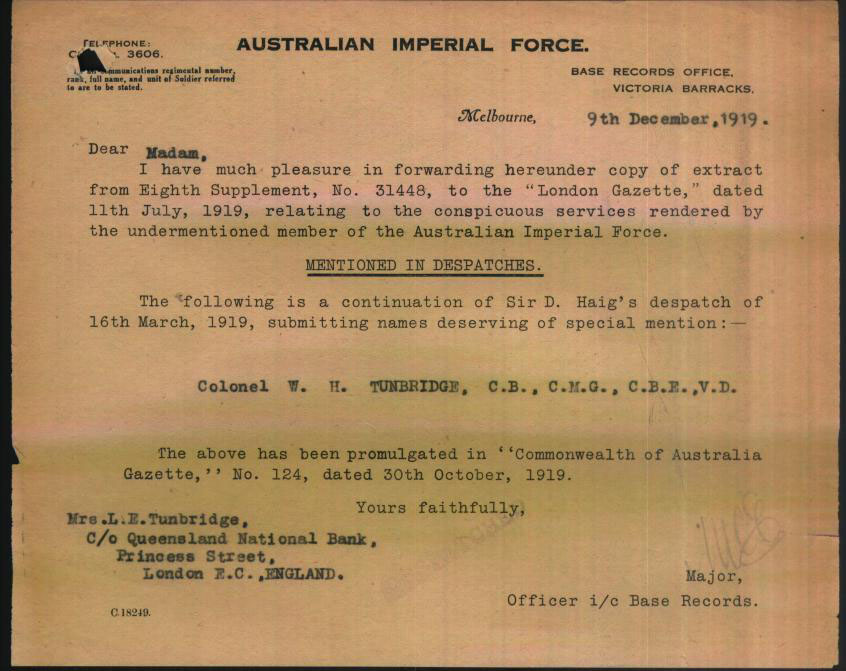