A photographic story of the nation’s longest war and those who served by Gary Ramage and Ian McPhedran
There have been precious few books published regarding Australia’s contribution to the war in Afghanistan over the last thirteen years. Afghanistan: Australia’s War perhaps speaks on behalf of the 26,000 plus who have served there since 2001. While about 400 soldiers still serve there, this book is well timed after Australia’s main force withdrawal from Oruzgan Province late last year.
Afghanistan: Australia’s War is printed in a ‘coffee table’ format and seeks to recognize and celebrate the significant contribution that Australian troops have made to the war in Afghanistan.
Afghanistan: Australia’s War features hundreds of stunning images by award-winning photographer Gary Ramage, and the words of best-selling author and defence writer Ian McPhedran. Over the course of the last ten years, Ramage has travelled extensively in Afghanistan with both the U.S. and Australian militaries as a civilian and news photographer. He has also covered conflicts in Somalia, Kosovo, East Timor and Iraq. McPhedran is the national defence writer for News Limited. He has been a journalist all his working life and has also covered conflicts in Burma, Somalia, Cambodia, Papua New Guinea, Indonesia, East Timor and Iraq.
Ramage’s images cover a wide range of subjects. His photographs are stunning – powerful, moving, gut-wrenching. They show the dirt, blood and the grit of war, comrades-in-arms and the power of mateship. They also show many unexpected moments of tenderness: a malnourished baby in the arms of a soldier; a child’s hand pressed to a window as soldiers march by; a soldier and his dog sleeping together on the ground for warmth. These are the juxtapositions which make his photographs so memorable. Ramage’s photographs include not only the battles and their bloody aftermath, but the landscape, the towns, the people, the patrols, the barracks and the bases.
McPhedran’s text provides a brief chronology of the shifting Australian contribution over the years as well as thoughtful observations about the nature of Australia’s involvement in Afghanistan and how it was being portrayed and understood by the Australian public.
The book is arranged into six thematic parts including “first impressions”, “on patrol” and “blood and honour”. In the last part titled “the end”, McPhedran reflects on the human and financial cost of Australia’s involvement in the war but refrains from making any personal conclusions. He reflects on Ramage’s images as to which might be considered emblematic of the venture, but I suspect the image selected for the cover is perhaps the sub-conscious choice – two anonymous soldiers labouring up a hill towards an unclear objective and with an anonymous Afghan soldier, half hidden and seemingly reluctant, poised to press on up the hill past the weary Aussies.
Afghanistan: Australia’s War achieves its aim of recognizing and celebrating the significant contribution that Australian troops have made to the war in Afghanistan. The authors and the publisher should be congratulated for producing such a record. Afghanistan: Australia’s War will have prime appeal to those that have served there and to their friends and family.
Not surprisingly, the book also includes an honour roll of the forty members killed in Afghanistan at the time of publishing, but perhaps the recent death of Lance Corporal Todd Chidgey on 1 July 2014 tells us that the story of Australia’s contribution to the war in Afghanistan might not be over just yet.
HarperCollinsPublishers, 2014; 256 pp.; ISBN 9780732299132; RRP $49.99 (hardback) 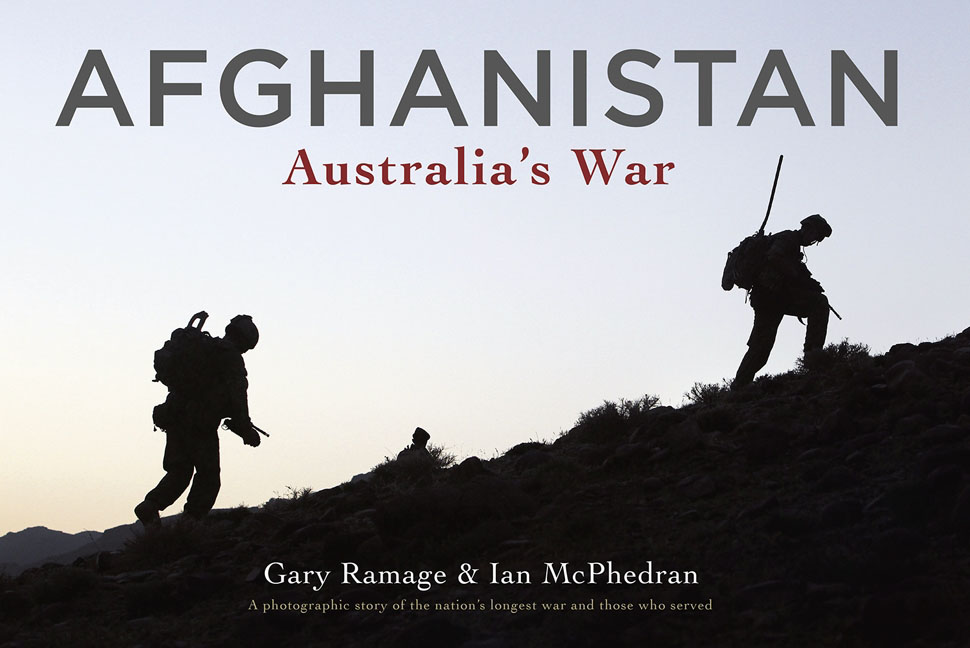