Published on the centenary of the first Anzac Day in 1916, Anzac Day Then and Now is a collection of perspectives on Anzac Day from contributors who were asked to examine the events that set apart 25 April from other days in the calendar, and to explore why Anzac Day appears to mean so many different things to different people. It is the first book to take a long-term, broad view of Anzac Day and how it has been marked in Australia.
Historians and cultural commentators – John Connor, Jeff Doyle, Tom Frame, Michael Gladwin, Jeffrey Grey, Carolyn Holbrook, Ken Inglis, Gareth Knapman, John A. Moses, Heather Neilson, Robert Nichols, Christina Spittel and Peter Stanley – explore why Anzac Day was chosen to commemorate our war dead, and why it has arguably overshadowed Australia Day as a reflection on what it means to be Australian.
The contributors examine the early debate between grieving families and veterans about whether Anzac Day should be commemorated or ‘celebrated’, the effect of the Vietnam War, popular culture’s reflection on the day, commercialisation as well our political leaders’ increasing profile in public commemorations.
As editor and a contributor, Professor Tom Frame believes that the role of academics is to challenge people to “think critically and creatively about the place of uniformed service and the importance of armed conflict in the evolution of the Australian nation”. Does Anzac Day honour those who died pursuing noble causes in war? Or is it part of a campaign to redeem the savagery associated with armed conflict? Do the rituals of 25 April console loved ones? Or do they reinforce security objectives and strategic priorities?
Anzac Day Then and Now shows that Anzac Day has evolved considerably since 1916, and that the notion of a traditional commemoration is misleading, as its place, function and observation have never been static. It remains an amorphous and shifting phenomenon in Australian social order.
Frame is a former naval officer, academic, historian, author and commentator. A graduate of the Universities of New South Wales, Melbourne and Kent, he was appointed Director of the Australian Centre for the Study of Armed Conflict and Society, University of New South Wales, Canberra, in mid-2014. He is the author or editor of 26 books and has been commissioned to produce a 50th anniversary history of the relationship between the University and the Department of Defence for release in 2017.
Anzac Day Then and Now includes a smattering of black and white images and two appendices with poems and hymns relating to Frame’s chapter. The notes are comprehensive but disappointingly there is no index.
Frame concludes that perhaps commemoration is about how we would prefer to remember the past, and that we choose to forget the complexities and conundrums of history. In all, Anzac Day Then and Now is a multi-faceted examination of the phenomenon of Anzac Day but, perhaps unsurprisingly, it doesn’t make any grand conclusions. If there is any conclusion to be drawn it is that Anzac Day will likely continue to shift in its meaning and observance in the future. 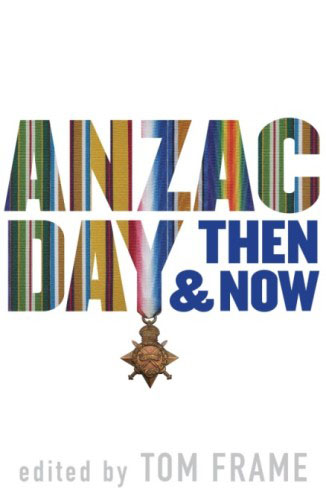