Anzac to Afghanistan: The History of the 3rd Brigade by Glenn Wahlert – Book Review

As the first Australian soldiers to land at Anzac Cove on 25 April 1915 and among the last to serve in Afghanistan 100 years later, the men and women of the Australian Army’s 3rd Brigade have a long and proud history of service. Glenn Wahlert’s Anzac to Afghanistan does a tremendous job at capturing the breadth and depth of that history and communicating it in plain English. 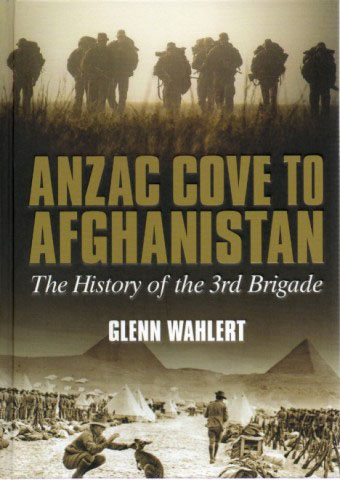 The book provides a fascinating picture of a slice of Australian military history from the perspective of one of Australia’s premier fighting infantry formations from Federation to the present. Wahlert’s explains that the 3rd Brigade was initially raised in 1903 as part of the Commonwealth Military Forces but with units located in Queensland, Tasmania, South Australia and Western Australia. Removed from the Order of Battle in 1906 the Brigade was re-raised as part of the Australian Imperial Force (AIF) in 1914. As the covering force for the landing on Gallipoli the brigade saw its first action on 25 April 1915. It remained at Gallipoli until the withdrawal on December 1915, taking part in a number of battles including Lone Pine and Sari Bair. The Brigade subsequently served in France and Belgium on the Western Front where it endured three years of horrendous trench warfare. By war’s end the Brigade’s four infantry battalions had incurred a casualty rate of over 300 percent.
Disbanded with the other formations of the AIF in 1919, the Brigade was re-raised as part of the Citizens Force soon afterwards and then mobilised with Japan’s entry into the war in 1941. During World War II the brigade was used in a defensive role, serving in Darwin, Papua New Guinea and North Queensland before being disbanded in 1944.
Re-formed as the 3rd Task Force during the Army’s expansion for the Vietnam War in 1967,  the Brigade was made up of three infantry battalions—the 1st, 2nd and 4th Battalions, Royal Australian Regiment—as well as one squadron from the 3rd Cavalry Regiment, the 4th Field Regiment and the 3rd Field Engineer Regiment. Although the task force did not deploy to Vietnam as a formed unit, most of its component units were sent. In 1973, following the end of Australia’s involvement in Vietnam, the 3rd Task Force was re-allocated to the 1st Division and later, in 1981, readopted the designation of the 3rd Brigade. During the 1980s the brigade served primarily as the Operational Deployment Force, which was tasked with providing a robust warfighting capability to the government available for rapid deployment anywhere in the world.
Since then, soldiers of the 3rd Brigade have deployed to almost every theatre in which the Australian Defence Force has seen action in the South Pacific, Somalia, Cambodia, Rwanda, Bougainville, Timor-Leste, Solomon Islands, Iraq and Afghanistan. The Brigade is currently based at Lavarack Barracks in Townsville, Queensland and fulfils the role of the Australian Army’s ready deployment force.
Wahlert is a graduate of the Officer Cadet School Portsea and after 20 years of service in the regular Army he transferred to the Army Reserve where he is currently a member of the Army History Unit. Wahlert is the author of several books and journal articles on topics ranging from military history to high-technology crime.
Anzac to Afghanistan is professionally researched, well organised, clearly written and generously illustrated with a large number of colour and black and white photographs, maps and organisational wiring diagrams. Dr Bob Breen and Dr John Blaxland – both notable military historians – contribute eight and one chapter respectively covering the period from 1967 to 2006. The endnotes are comprehensive and the index extensive. The text usefully includes a number of ‘fact boxes’ that explain some of the concepts, tactics and weapons for those readers who are less familiar. Two appendixes provide short biographies of the Brigade’s seven Victoria Cross winners, and the names of the brigade commanders. The finish is high quality; however, some of the tables and images are difficult to read because of the use of imagery in the background.
In telling the story of the 3rd Brigade Anzac to Afghanistan also tells the story of the Australian Army over a century of service to the nation. It is a quality publication that deserves to be read and take pride of place on the bookshelves of those interested in and concerned about Australia’s military history.
Big Sky Publishing; 2015; 396 pp.; ISBN 9781925275551 (hardcover); RRP $39.99