Anzac’s Long Shadow – The Cost of our National Obsession

Some readers will cringe, some will cheer, some will think and many will do all three in reaction to Anzac’s Long Shadow. Whatever the reaction James Brown should be commended for producing this short and hard-hitting book. Not only does he question Australia’s national obsession with Anzac, but in the process he analyses how it has come about and why it is an issue that we should be concerned about.

Brown is a former Australian Army officer, who commanded a cavalry troop in Southern Iraq, served in the Australian taskforce headquarters in Baghdad, and was attached to Special Forces in Afghanistan. Today, he is the Military Fellow at the Lowy Institute for International Policy. He also chairs the NSW Government’s Contemporary Veterans Forum.

Brown argues that a century after the World War, Australia is expending too much time, money and emotion on the Anzac legend; that Anzac is being ‘bottled, stamped and sold’. He is concerned that this ‘festival of the dead’ is at the expense of our current serving men and women.

Australian governments are planning to spend more than $325 million on commemoration of World War I in the coming years. As government spending is being increasingly scrutinised, he asks the question: why do Australians seem to be more interested in the soldiers of a hundred years ago than those fighting for them today?

In exploring this central issue Brown examines a range of contemporary issues and poses some challenging and at times confronting questions. Have Australians been fooled into thinking that Australian soldiers are so good they don’t die? Does Australia have a lower tolerance for casualties than Canada? Has our understanding of military history been split along party lines? Is there an ‘arms race’ for commemoration in Australia? Does Australia’s obsession with dead soldiers shape our understanding of modern war? Is the ADF’s current approach to the media creating a widening chasm of understanding between the military and Australian society?

Anzac’s Long Shadow reads like an extended editorial piece. No subject is spared from his criticism – Australian culture, the government, the ADF, ex-service organisations, the media – all cop flak. Brown does a good job of exposing some myths and contemplating paradoxes. “Veterans are trapped in a martial Madonna/whore complex. On the one hand they are heroic warriors; on the other they are deeply flawed individuals”, is one example. Another is that the VB Raise a Glass campaign runs parallel to efforts within the ADF to reduce binge drinking habits. A third is that “maybe, a century later, we have not truly owned the defeat at Anzac Cove?” Often though, at the end of the process, the question “OK, good point…so what do we do now” hangs uncomfortably. At least the discussion and debate might now begin.

I’m not convinced that every issue he identifies and comments on is directly related to the Anzac myth and in some parts the book feels like a broadside against the ADF and the Australian Government. In some instances his perspectives are polarised but the connections are made and the overall picture he paints is one of concern for the state and health of the military in Australian society – particularly as the ADF concludes over a decade of deployments and the Anzac Centenary commences.

Anzac’s Long Shadow is a must read for anyone who has served in the ADF – if for no other reason than to reflect on their service and personal experiences. But Brown’s main target is the politicians and generals that have the power and resources to address some of the issues he raises.

The publication of this book on the eve of the much vaunted Anzac Centenary is controversial but may not slow the ‘Anzac spirit’ train that seems to have already left the station. The probability of any public figure risking ridicule and going against the flow in 2014 and 2015 is sadly low.

There is a chance, however, that the coming Anzac ‘binge’ will – like a hangover after a party – convince us to make some changes. It is at this point – sometime in 2016 I suspect – that I hope James Brown’s book will be dusted off and itself remembered. Adroit political manoeuvring might cleverly leverage the Anzac Centenary for the actual benefit of contemporary veterans. 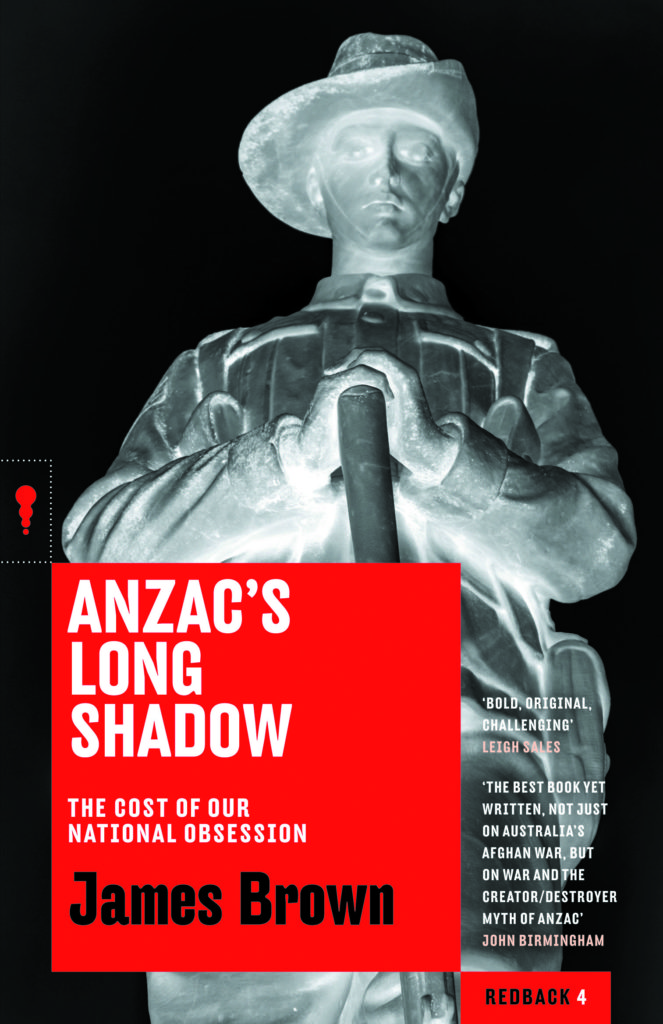