On Friday, 28 March 2014, The Hon Ted Baillieu MLA, unveiled an impressive military plaque on Olympic Boulevard, outside the new AAMI Park stadium, the location of which now covers where the Northern Engineer’s Depot and the Southern Artillery Depot were located from 1935 till 1991.
Major General Jim Barry in his capacity as a Management Committee Member and Chairman of Olympic Park from 1981 to 1995 and then as a Trustee of Melbourne and Olympic Parks Trust until 2005, facilitated the development of this military plaque by his good friend Colonel Ross Bastiaan AM RFD. 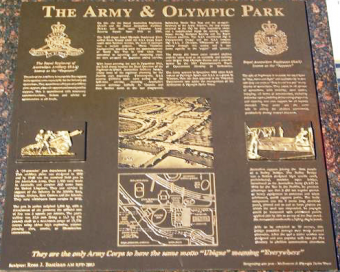 Previously Ross had sculpted for the Trust, a bronze “mud map” of what Olympic Park looked like during the 1956 Olympic Games and that plaque incorporated both depots as they were used logistically to support those Games. A major portion of that plaque has been incorporated in the new plaque along with a location map, a 25 Pounder Gun Detachment and a Bailey bridge being erected, as well as being surmounted by both Corps Badges.

This is a major piece of work that is an important addition to the story of the precinct; recording a significant piece of military history for both current and future generations. It is well worth a visit!