Australia and the Vietnam War by Peter Edwards
This book is a great high level examination of Australia’s South-East Asian Wars between 1948 and 1975. Indeed, despite the titles focus on the Vietnam War this is really a single volume version of the nine volumes of the Official History of Australia’s Involvement in Southeast Asian Conflicts 1948–1975 published between 1992 and 2012. In this regard, Edwards, the official historian for the series, describes Australia and the Vietnam War as the equivalent to C.E.W. Bean’s single volume Anzac to Amiens and Gavin Long’s The Six Years War.

Edwards is a writer, historian and biographer, who has published extensively on Australian and international history and politics. He is currently an Adjunct Professor at Deakin University, Melbourne and has in recent years held professorial appointments at Flinders University in Adelaide and the University of New South Wales, Canberra.

Australia and the Vietnam War actually examines the Malayan Emergency and the Indonesia-Malaysia Confrontation as well as the Vietnam War (aka the second Indo-Chinese war, or from the Vietnamese perspective the ‘American War’) – each of which occurred in the wider context of the Cold War and decolonisation.

Australia and the Vietnam War is not an ‘in the weeds’ tactical account of the wars – but an examination of why we went to these places, and what political, diplomatic, social and military factors impacted on the management of the deployments. Those seeking SAS-like war stories should go elsewhere.

Edwards probes some important questions – Was Vietnam a case of Australia fighting ‘other people’s wars’? Were we really ‘all the way’ with the United States? How valid was the ‘domino theory’? Did the Australian forces develop new tactical methods in earlier Southeast Asian conflicts, and just how successful were they against the unyielding enemy in Vietnam?

With the benefit of decades contemplating the topic, Edwards has done a masterful job of analysing the factors that led to high-level decisions. He makes some thoughtful comparisons between the ways in which the Malayan Emergency, the Indonesia-Malaysia Confrontation and the Vietnam War were handled by successive Australian governments. He also ‘busts’ a number of myths that have developed over the years regarding Australia and the Vietnam War. For example, national service was not introduced because of the commitment to the Vietnam War, and there were consistently more volunteers for national service than men who refused to be drafted. The result is a comprehensive, balanced and easily understood account of a complicated and contentious period in Australian history.

While he does leverage the New Zealand records, Edwards does not draw heavily from US sources or indeed from North Vietnamese records that might also provide alternate perspectives on decision drivers and events.

The last chapter titled “Lessons, Legacies and Legends” is where Edward’s tremendous analytical skills comes to the fore. He makes some very valuable insights and reflections on strategic and defence policy, foreign policy, operational methods, counter-insurgency operations, conscription and the post-war experiences of Vietnam War veterans.

Australia and the Vietnam War includes some good images, but the one colour map of South Vietnam is too small a scale to be of any real utility. The front and rear inside covers have been used to place two maps of South-East Asia – the first from 1945 and the second from 1965-1974 – but the changes are too subtle. The text includes two black and white maps of Phuoc Tuy Province and the Dat Do barrier minefield. Overall, however, the excellent text might have been burnished by a better series of maps throughout the text.

The book includes a list of abbreviations and a chronology of events at the start which are useful to readers unfamiliar with the subject. There are appendices showing the number of troops deployed to South Vietnam over time; the key political and military appointees between 1962 and 1973 (albeit too small a font to read); and short biographies on all those named in the book. Edwards also includes a useful section recommending further reading broken down by theme. A comprehensive index will assist researchers.

Edwards should certainly be congratulated for his commitment, professionalism and dedication to recording Australia’s military history by not only completing the nine volumes of the official history, but then going the extra mile for this additional ‘unofficial’ volume. It is a legacy of which he can be justifiably proud. 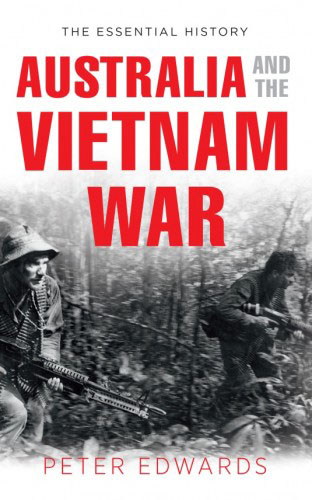