The Good International Citizen: Australian Peacekeeping in Asia, Africa and Europe, 1991-1993. Volume 3 of the Official History of Australian Peacekeeping, Humanitarian and Post-Cold War Operations. by David Horner and John Connor
The Good International Citizen is the second volume of the five-volume Official History of Australian Peacekeeping, Humanitarian and Post-Cold War Operations series. The first published volume Australia and the New World Order: from Peacekeeping to Peace-enforcement 1988-1991 was published in 2011.
This volume explores Australia’s involvement in six overseas missions following the end of the1991 Gulf War: Cambodia (1991–99); Western Sahara (1991–94); the former Yugoslavia (1992–2004); Iraq (1991); Maritime Interception Force operations (1991–99); and the contribution to the inspection of weapons of mass destruction facilities in Iraq (1991–99). These six missions were all initiated during 1991 and some of them continued in various forms for many years.
These six missions reflected the increasing complexity of peacekeeping, as it overlapped with enforcement of sanctions, weapons inspections, humanitarian aid, election monitoring and peace enforcement. The phrase ‘good international citizen’ was politically popular at the time, but was accompanied by a diminishing sense of confidence in multilateralism and a ‘new world order’. With full access to all relevant Australian Government records, David Horner and John Connor provide readers with a comprehensive and authoritative account. This volume shows how Australian policy in the immediate post-Cold War era was driven as much by the idea of being a good international citizen as it was by narrow national interest.
As the official historian for the series, Horner uses the preface to explain the approach used and why it is different to earlier official histories. He explains…“for this series we have tried to tell the story of the respective missions at three levels: the strategic level, in which we have concentrated on the government’s decision-making process; the operational level, in which we sought to explain how the Australian Defence Force (ADF) and other agencies planned and executed their tasks; and the tactical or personal level, in which we try to describe what the participants actually did in the field.” The end result of the approach is a very comprehensive and coherent account of Australia’s contribution and involvement in these multinational operations.
David Horner is the Professor of Australian Defence History in the Strategic and Defence Studies Centre at the Australian National University. In 2004 Horner was appointed the Official Historian of Australian Peacekeeping, Humanitarian and Post–Cold War Operations series. Dr John Connor is a senior lecturer in history at the University of New South Wales, Canberra. Connor previously worked in the official history team at the Australian War Memorial from 2004 to 2007.
The main body of The Good International Citizen is over 500 pages in length. It also includes a detailed chronology of events between 1989 and 1999, a full list of abbreviations, two appendices and a comprehensive index. Unsurprisingly, the bibliography is extensive and a valuable tool for future researchers in itself. There are a large number of colour plates which include maps and photographs, as well as some black and white figures, tables and maps throughout the text.
In all, about 4,000 ADF members participated in these six overseas missions and as Horner concludes Australians should be proud of the achievements of those who took part. As with previous peace-keeping operations, the missions were arduous, demanding and sometimes hazardous. Australia’s good fortune in avoiding casualties largely continued. One Australian, Major Susan Felsche, was killed on UN service in Western Sahara.
I commend The Good International Citizen to those who seek a better understanding the context, complexities and challenges of Australia’s military operations in the immediate post-Cold War era. 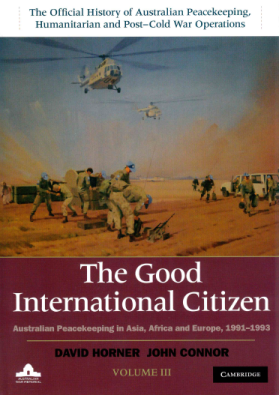