Busting Beersheba: Australians in the Campaign to defeat the Ottoman Empire

As Patron of MHHV it is my privilege to offer my thoughts on what I considered was an excellent conference. The title was ‘Busting Beersheba’ while most ‘old soldier’ or Military history buffs would remember it as the ‘from Suez to Aleppo’ Campaign! Irrespective of the emphasis on Beersheba, we have been presented with an excellent programme, with diversity over the three Services, with the exception possibly of the air element; presentation of the major battles, an erudite overview of the politico/strategic situation, especially from the Ottoman perspective and a classic exposition of the logistics difficulties experienced by both sides.

Turning to the programme: The Opening Remarks by convenor, Mike Buckridge set the scene for the day and to his credit he managed the day’s timelines, including some lively questions periods. 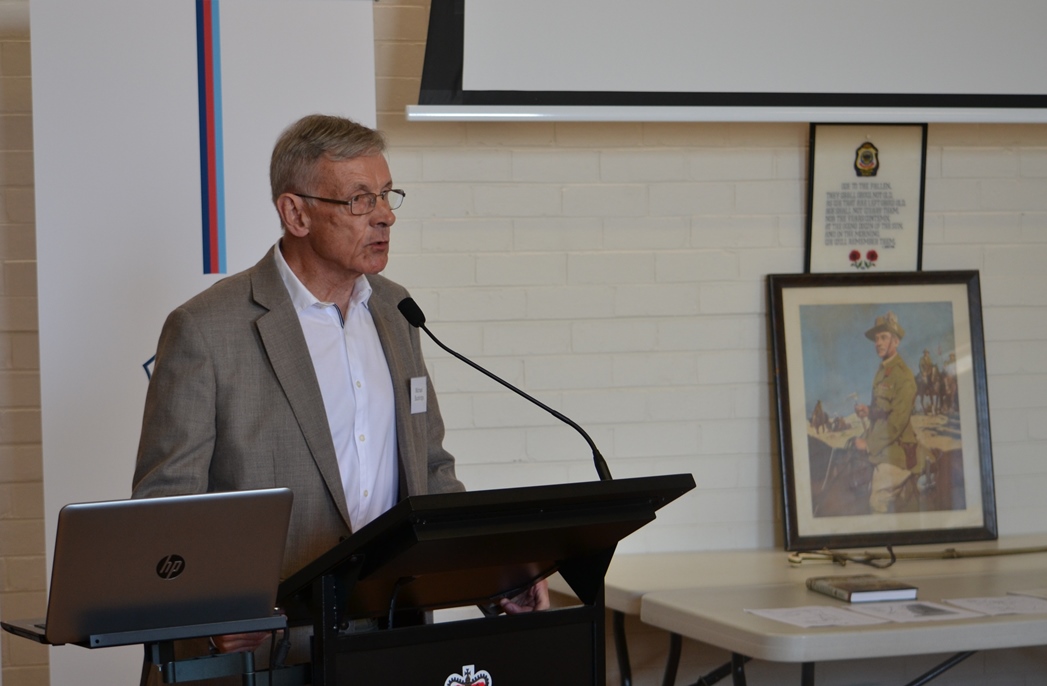 David Cameron as keynote speaker provided the necessary historical overview of the range of the campaign, though I would have liked him to have had time to outline the battles after Beersheba. He correctly dealt with the turning point of the campaign, the battle of Romani, in the previous year, where Chauvel’s superb series of tactical withdrawals against the Ottoman might, forced them through heat sand and logistics to withdraw from that battle to effectively the Gaza line. The spring board to success was the Charge at Beersheba, highlighting the Principle of War, namely ‘surprise’ and deception. Again it was Chauvel’s understanding of the situation! Any slower form of attack would have seen the wells demolished by the German engineers, causing a fourth painful withdrawal from the Gaza line. Who knows the outcome of the campaign if the wells had been lost? 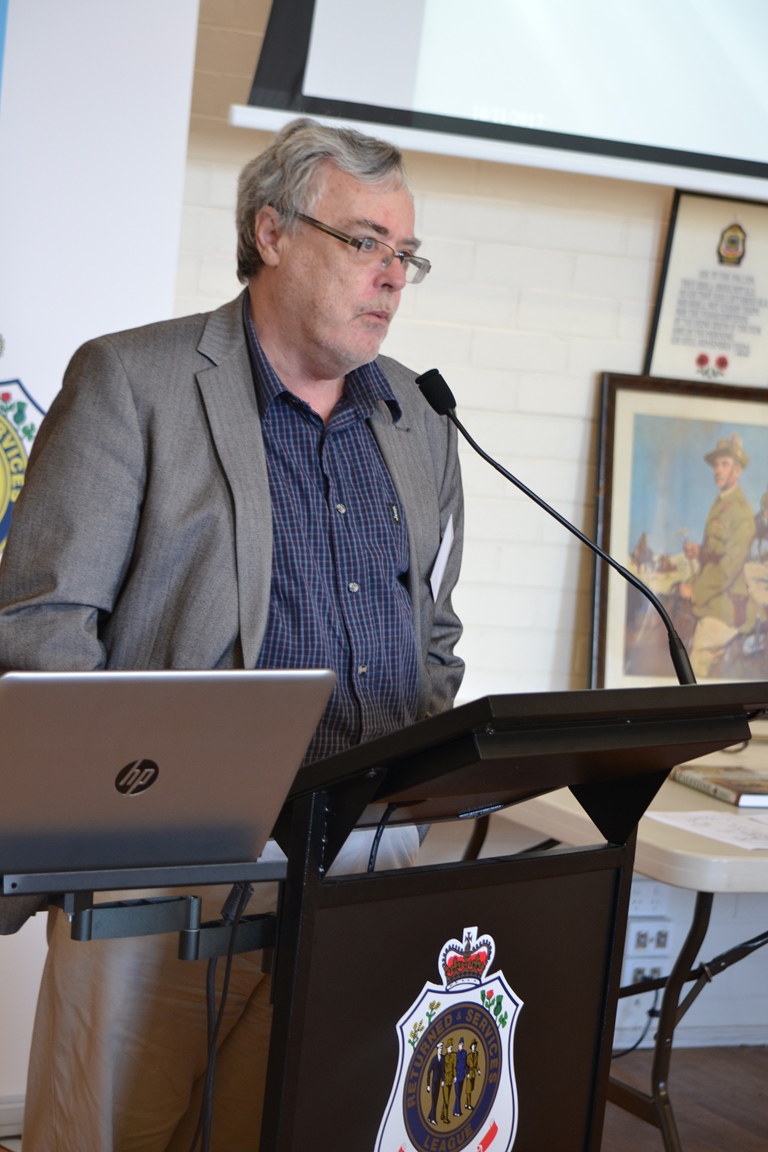 Marcus Fielding provided the counterpoint and overview of the Ottoman and German part in the campaign, concentrating on their higher command and the personality clashes from both enemies with German efficiency as distinct from the Ottoman approach, though no one can dismiss the dogged fighting qualities of their soldiers. There were frequent changes of commanders thereby losing cohesion and maybe the miss-appreciation of Beersheba and believing the threat was from coastal invasion. The other key factor was the loss of their air superiority denying them intelligence by observation. 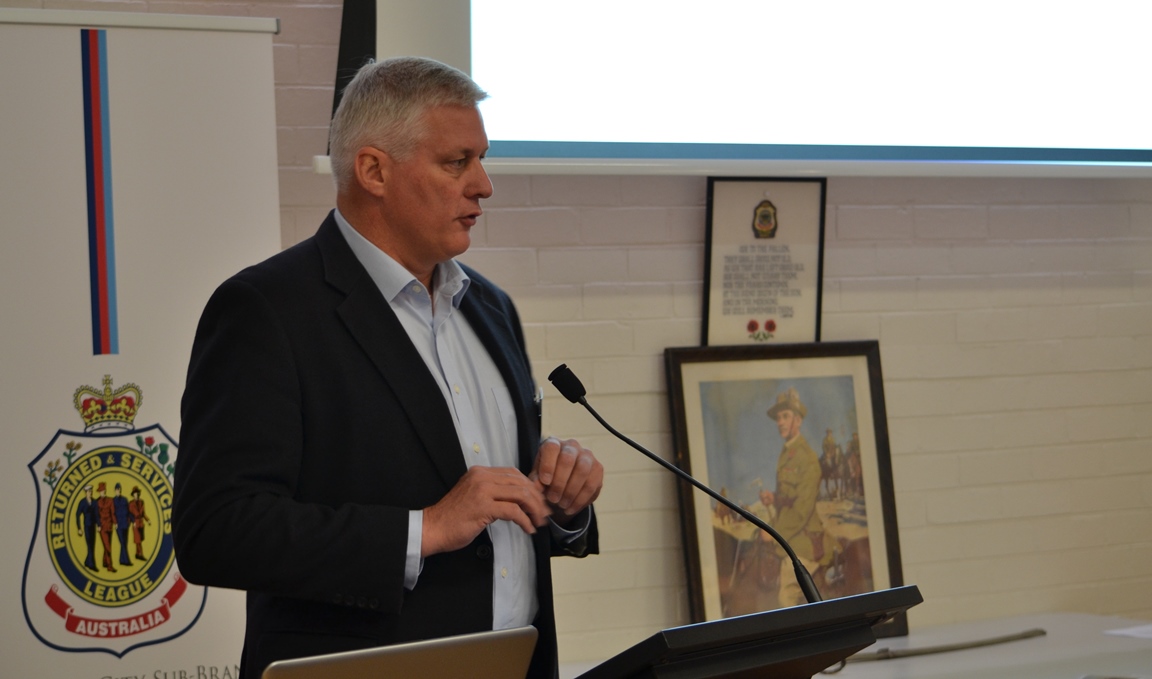 In the second session David Holloway quietly led us through the human side of the training and conditions of the campaign mainly through poignant stories of beautifully interspersed personalities. He also provided clarification of ‘mythical’ facts in relation to Beersheba. 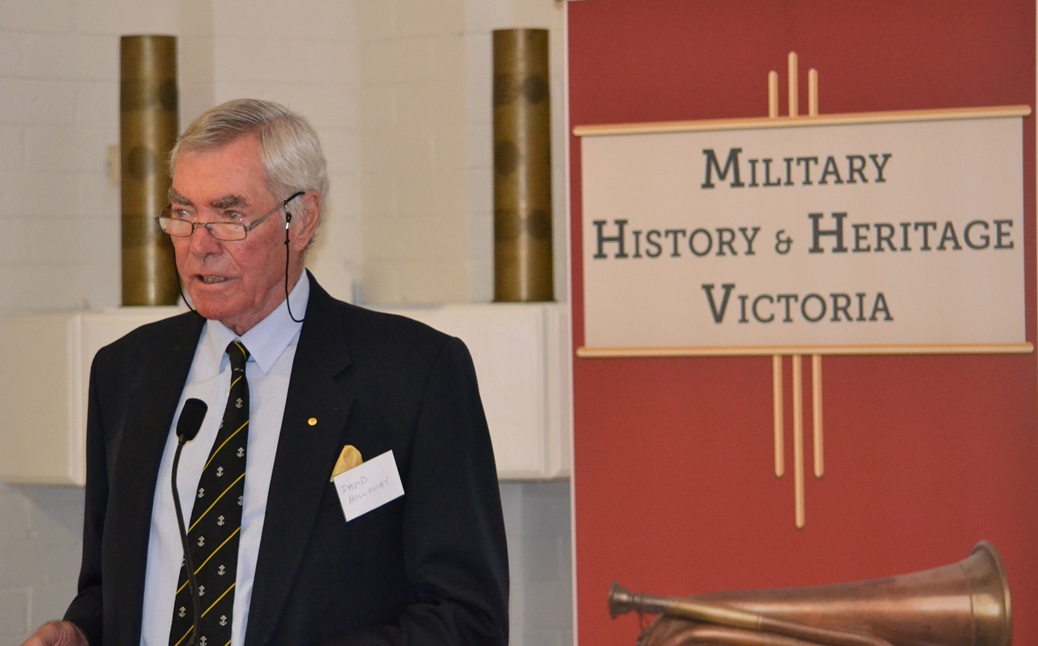 This was followed by Honor Auchinleck’s two lovely stories. The first one about Chauvel’s love of horses from farm to battlefield and even as a conversation piece during and after the war (s), especially the Melbourne Cup. Her second one was about Chauvel’s wife Sybil, 23 years his junior, the bedrock of their family life and her contribution to the community. 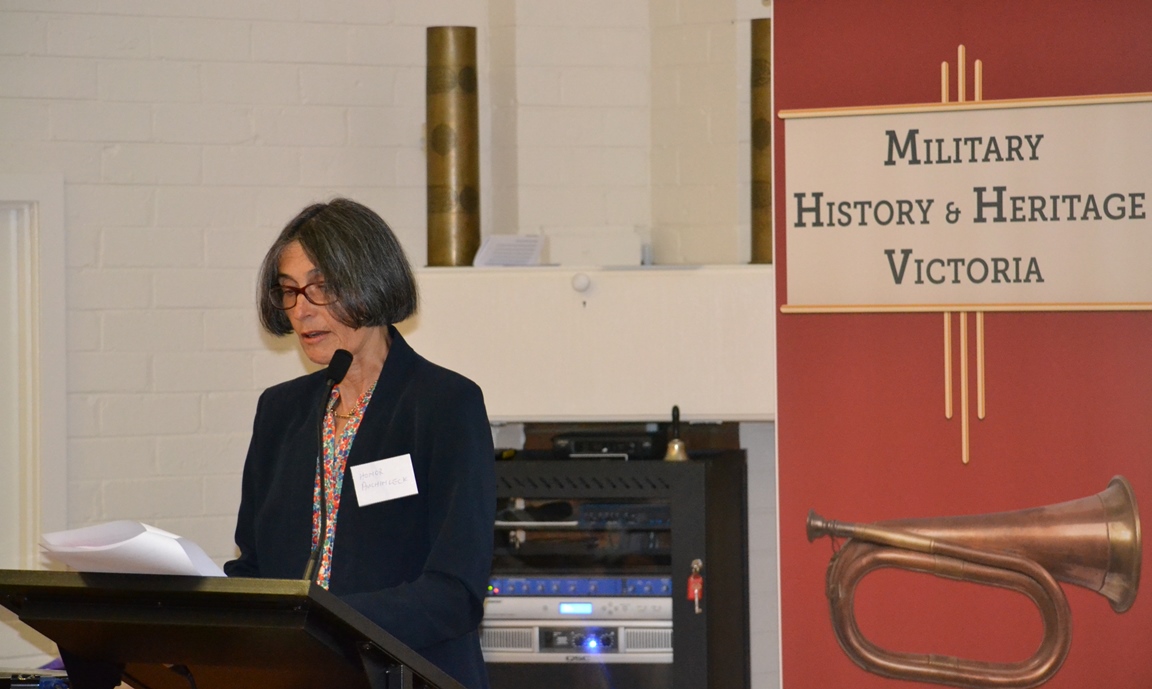 There was a surprise inclusion to end the session, by the latter day poet Jim Brown, who explained and recited his emotive poem ‘My ANZAC on the Wall’. What a way to finish our morning session? 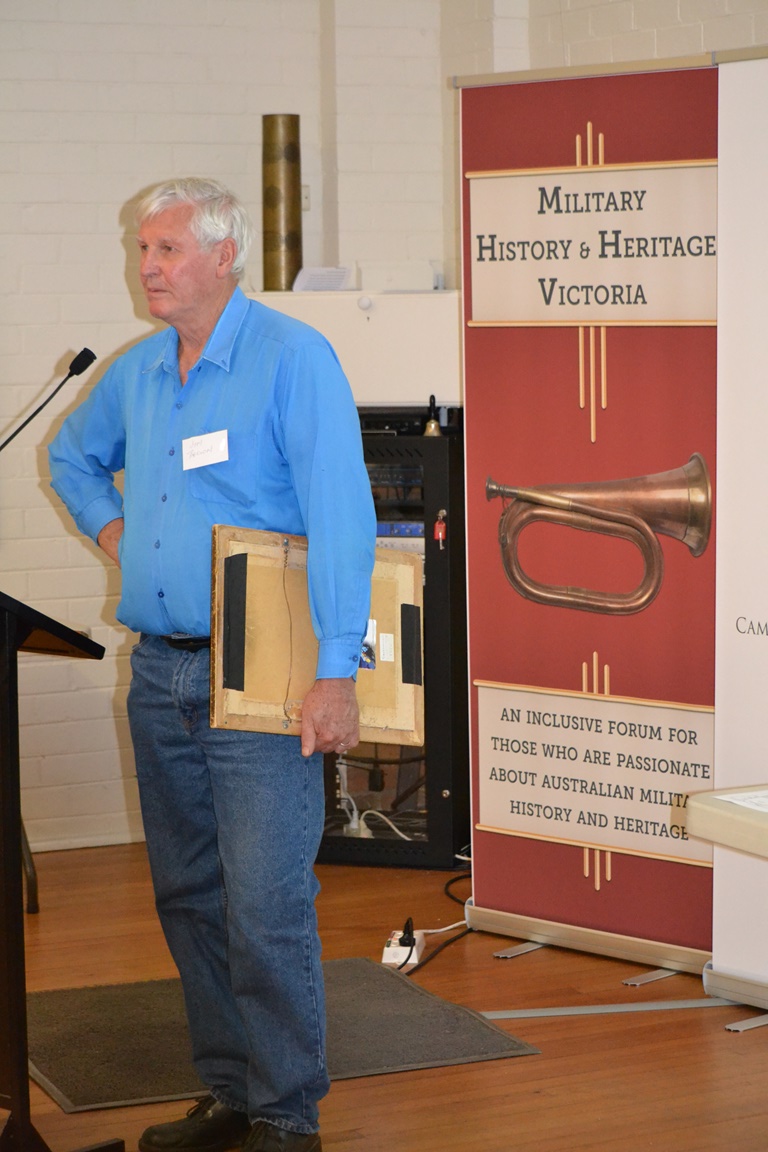 Following an excellent ‘light’ lunch, Richard Chauvel informed us on Harry Chauvel’s view of the three year campaign, ’Romani to Damascus’, from family correspondence and other sources. What emerged was Chauvel’s classic and simplistic view of the campaign, that was to ‘defend the canal’ and then ‘defeat the enemy’! Obviously to him Romani was the strategic victory that forced the Ottoman withdrawal to defensive positions. Whilst the ‘charge’ at Beersheba was a “brilliant performance” it was only part way to Damascus, but for him the “symbolic end to the campaign’.

Richard also provided some nice vignettes about Chauvel‘s pilgrimages in the holy land, his Christian belief and not seeing himself as a latter day Crusader. 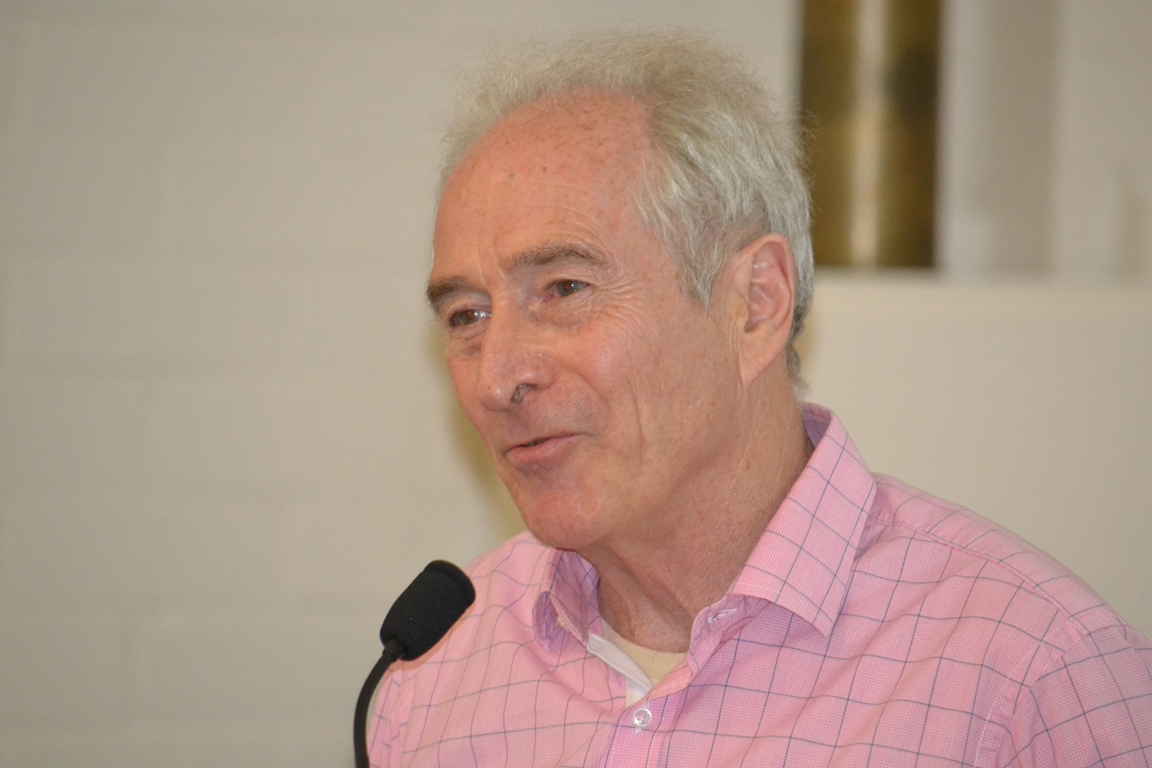 Alan Smith then provided us with an interesting interpretation from a Gunner’s point of view of the campaign and where ‘Allenby’s Gunners’ came from. 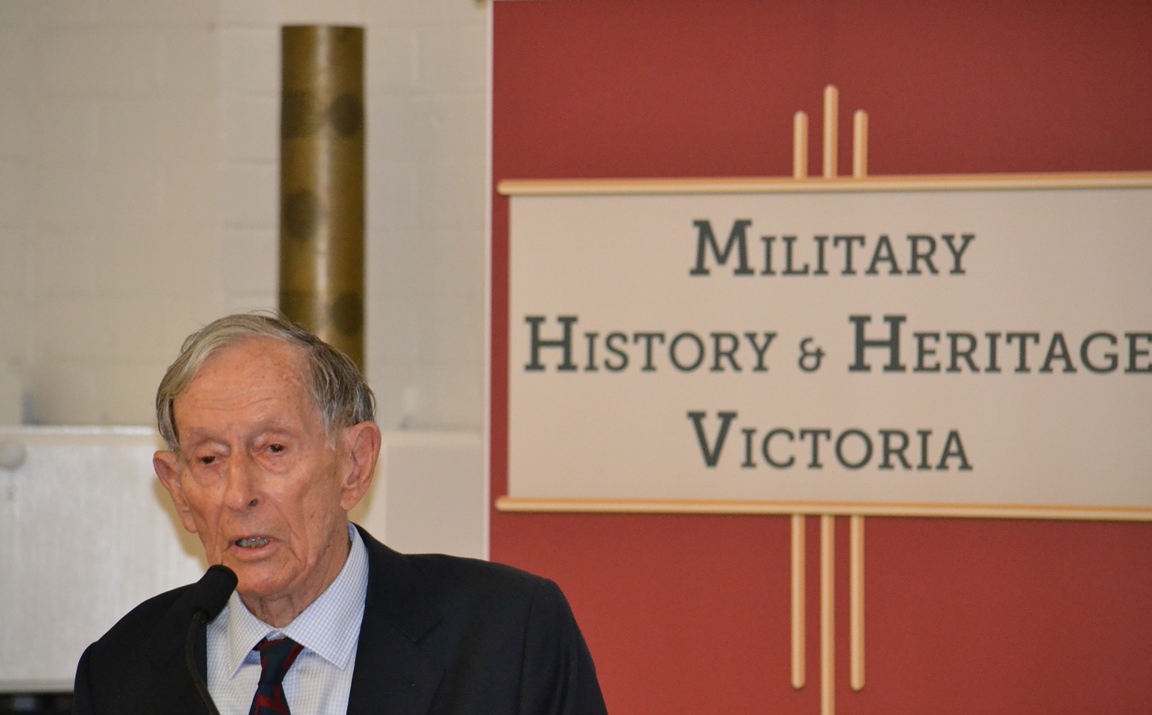 In the final session we were provided with two interesting addendums to the day’s proceedings in that Andrew Kilsby described the formation and use of Australia’s first ‘motorised Cavalry’ unit, the 1st Armoured Car Section. The humorous anecdotes and pictures overshadowed the fantastic ingenuity in developing the ‘flying bedsteads’ and the men that manned them. 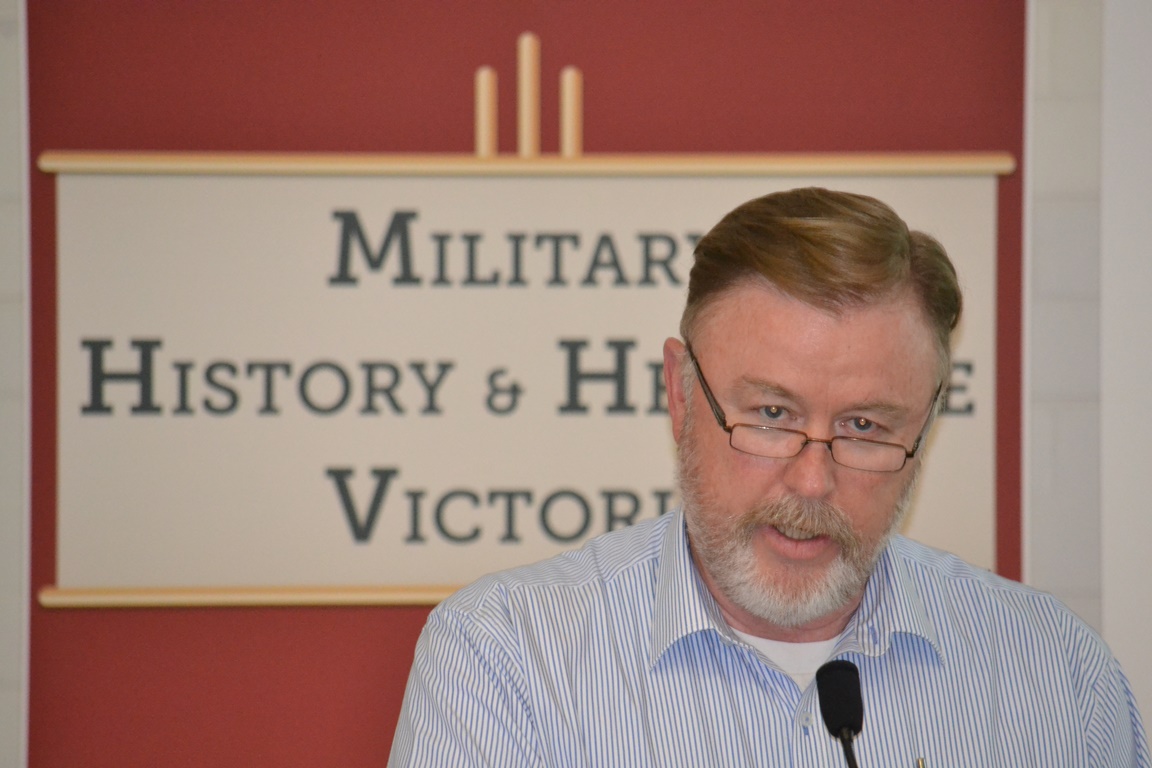 His partner in crime was Brent Taylor who accepted the challenge to research and present the ‘Logistics of Hell’ for both sides of the campaign, with their difficulties and how they dealt with them. The Axis used rail but had to manhandle stores with four changes of gauge! The Allies with the advantage of shipping and a railway build and finally camels on the ‘rabbit proof fence’ track. The numbers were huge and in stark contrast – 146kg per day/per man compared to 88kg on the Western Front – and all ‘man handled’. 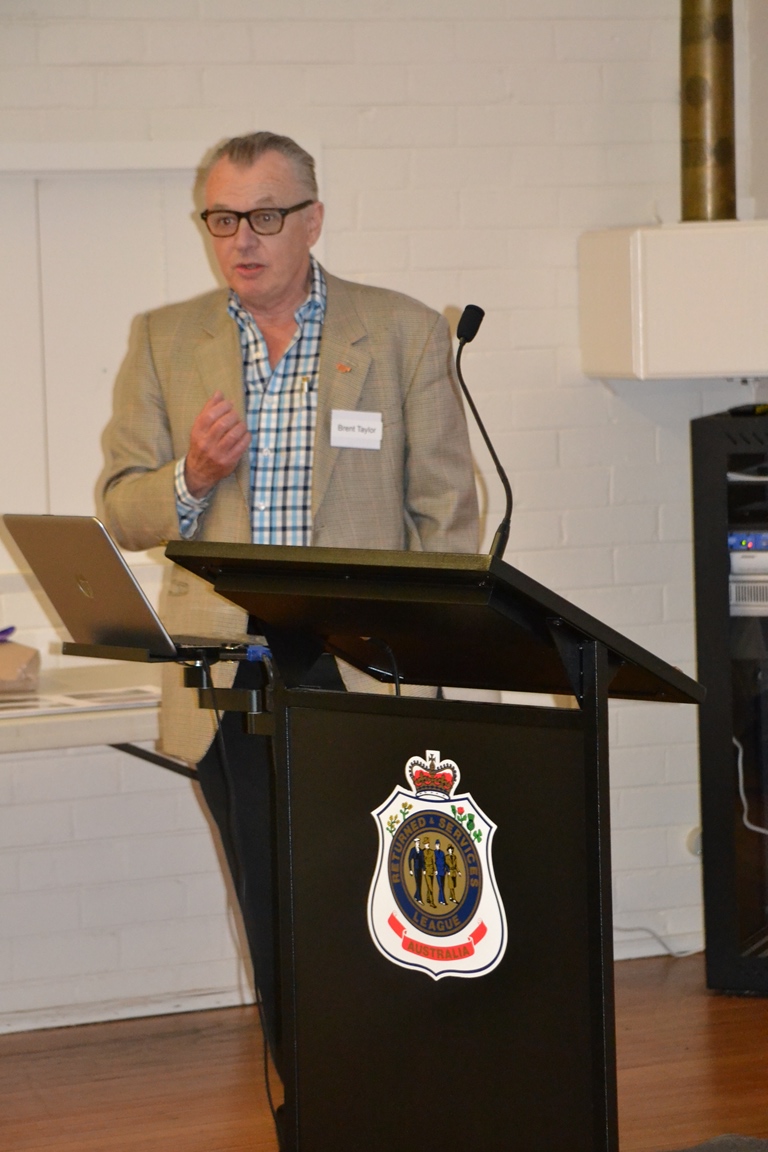 In the final question time we heard quite a few interesting answers and comments for which I must thank you the audience as it is my measure of the interest in the subject matter of the Conference. You will be able check the detail of what has been presented as all the proceedings will be published on our website.

I wish to thank all the speakers for their contribution to the proceedings and especially our convenor Mike Buckridge for his oversight of the Conference, but I cannot leave out thanking on your behalf Peter for the RSL’s arrangements, especially the victuals, and my fellow Committee members who make these events possible.

So ends from my perspective another successful Conference and I again thank you the participants for your obvious interest.

Paper – Here comes the cavalry – Dr David Cameron. A general outline of the campaign placing it in the context of the overall Allied strategy, its strategic aims; tracing its narrative from the beginning to the ultimate victory. Identify the key engagements and tell their stories; highlight Beersheba.

Paper – Sir Harry, his horses and the quiet Lady Chauvel – Dr Honor Auchinleck. Recollections of General Sir Harry Chauvel’s life, his love of horses and horsemanship and the influence of Lady Chauvel.

Paper – General Chauvel’s understanding of the campaign from family correspondence – Dr Richard Chauvel. A Comparison of contemporary recollections and later accounts; memorialisation; how the campaign has been remembered and commemorated.

Paper – Allenby’s Gunners – Alan Smith. The artillery in support; who they were and their importance to the campaign.

Paper – The logistics of hell – Brent Taylor. Getting food, forage, fuel, ammunition…and especially water to a mass army in the desert.