Philip Bradley has done two useful things in this book; he has taken extracts from Charles Bean’s diary from Gallipoli and combined it with dozens of never before seen photographs taken by soldiers. Bradley has also added some explanatory comments on the extracts. The end result is a significant work that adds to the growing collection of Anzac Centenary publications. 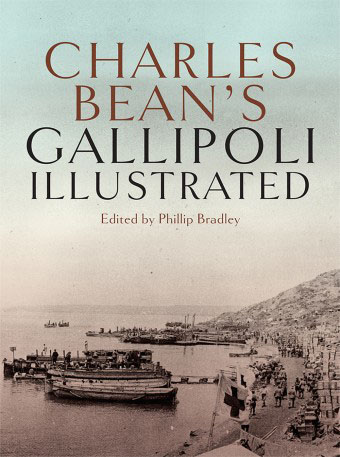 Charles Bean and Gallipoli are forever closely bound. Serving as the official Australian war correspondent from the landing to the evacuation, Charles Bean was able to dedicate his days and nights to witnessing and recording the events. But he also wrote personal diaries, and in those Bean provides extraordinary insights into his own emotions – his joys and sorrows, hopes and fears, loves and hates – and those he admired or disdained, the heroes and villains of the Gallipoli campaign. Charles Bean’s Gallipoli extracts the essence of Gallipoli from the diaries, immersing the reader in the terrible truths of war as only a first person account is able to do.

Adding to the immediacy of the text, Bradley’s research has uncovered a remarkable collection of photographs, the majority of which have come from the private collections of soldiers who took their cameras to war. “There was a general lack of official concern over the use of cameras at Gallipoli. There were probably more photographs taken on the ground at Gallipoli than during any other Australian military operation in either world war” claimed Bradley. Most of these photographs have not previously been published and provide another fascinating insight on the Gallipoli campaign.

Bradley is a leading researcher of Australian military history and author. He has had a lifetime interest in military history and his books are characterised by an intimate knowledge gained from his many trips to the battlefields. His previous books include: On Shaggy Ridge, The Battle for Wau, To Salamaua, Wau 1942-43 and Hell’s Battlefield. Charles Bean’s Gallipoli Illustrated is his sixth book, but the first to deal with WWI.

Charles Bean’s Gallipoli Illustrated contains a list of abbreviations, a prologue, explanatory footnotes throughout the text, over 180 illustrations as well as several maps. An appendix provides a short biography on the original owners of the private photo collections accessed. The book includes a bibliography and an index. Charles Bean’s Gallipoli Illustrated is beautifully presented and makes a handsome coffee table addition.