Australia and the New World Order: from peackeeping to peace enforcement 1988-1991 is the second in a five volume Official History of Australian Peacekeeping, Humanitarian and Post-Cold War Operations series. The ‘New World Order’ phrase pertains to the period immediately after the end of the Cold War when there was great hope for a more peaceful world but, paradoxically, the Australian Defence Force became a lot busier. 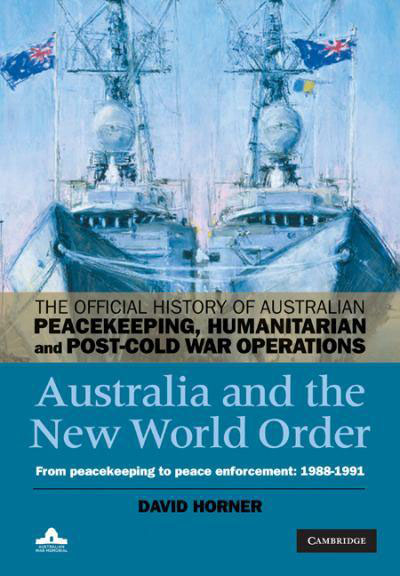 As the Official Historian for the series Horner uses the preface of this book to explain the approach used and why it is different to earlier official histories. He explains…“for this present series we have tried to tell the story of the respective missions at three levels: the strategic level, in which we have concentrated on the government’s decision-making process; the operational level, in which we sought to explain how the Australian Defence Force and other agencies planned and executed their tasks; and the tactical and personal level, in which we try to describe what the participants actually did in the field.” The end result of the approach, at least in this volume, is a very comprehensive and coherent account of Australia’s contribution and involvement in these multinational operations.
Australia and the New World Order: from peackeeping to peace enforcement 1988-1991 examines in some detail Australia’s operations in Namibia (1989-1990), the Iran-Iraq War (1980-1988), the UN observer mission in Iran (1988-1990), the UN land mine clearance mission in Pakistan and Afghanistan (1989-1993), and the Gulf War (1990-1991).
As ever, Horner’s research is first class and he cites not only written records but also employs material from interviews with a significant number of the decision-makers and participants. Together, they form a very readable account of events.
Australia and the New World Order: from peackeeping to peace enforcement 1988-1991 has over 500 pages in the main body and includes a detailed chronology of events, a full list of abbreviations, a series of useful appendices and a comprehensive index. Unsurprisingly, the bibliography is extensive and a valuable tool for future researchers in itself.
In the conclusion, Horner ably examines how these missions fit into the broader canvas of Australian history and identifies the continuities and discontinuities with Australian military tradition. In his closing paragraph he states “Australians who served in Namibia, Iran, Pakistan, Afghanistan, the Gulf of Oman, the Persian Gulf and Kuwait had much to be proud of. And the nation could be proud of them also, as they became the human face of Australia’s engagement with a turbulent world.”
I commend Australia and the New World Order: from peackeeping to peace enforcement 1988-1991 to those who seek a better understanding the context, complexities and challenges of Australia’s military operations in the immediate post-Cold War era.
A copy of the book is available for loan from the RUSI of Victoria Library.
Colonel Marcus Fielding is President of Military History and Heritage Victoria Inc. and a Councillor for the RUSI of Victoria.  He served in United Nations Mine Clearance Training Team in Pakistan and Afghanistan in 1992.