Dirty Wars – The World is a Battlefield 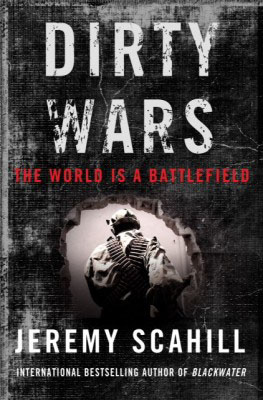 Dirty Wars is a deeply disturbing book. In it, Jeremy Scahill – an investigative journalist and author of Blackwater – describes how the US Government (USG) has prosecuted it’s ‘war on terrorism’ and ‘terrorists’ since 9/11 with an increasing use of targeted killings using drone and missile strikes, as well as clandestine raids by military special forces. He also reveals evidence of renditions and secret ‘black’ prisons, as well as murky multi-billion dollar deals with foreign governments and corporate entities such as Blackwater. Contrary to the public image, he claims that President Obama has actually expanded the ‘dirty wars’ approach pioneered by the George W. Bush administration.
Through his wide-ranging, well-sourced and persistent investigation, Scahill exposes the growing nature of the dirty wars approach the USG struggles to keep hidden, and argues that this approach is becoming steadily institutionalised within the USG.
Dirty Wars follows the consequences of Donald Rumsfeld’s declaration that the ‘world is a battlefield’. From Afghanistan to Yemen, Somalia and beyond, Scahill reports from the frontlines in this high-stakes investigation and explores the depths of America’s ‘global killing machine’. He goes beneath the surface of these covert wars, explaining how they have been conducted in the shadows, outside the range of the media, without effective USG congressional oversight or public debate. Scahill also tells the disturbing story of how the first American citizens came to be assassinated by their own government.
Scahill also puts a human face on the casualties of the violence: victims of night raids, secret prisons, cruise missile attacks and drone strikes, and whole classes of people branded as ‘suspected militants’ – many of which have been categorised as such by displaying ‘signature’ behaviours. He justifiably questions whether this approach by the USG is creating more terrorists than it is discouraging or killing.
Despite the breadth of Dirty Wars, I sense that there is a fair chance that Scahill’s investigation has not revealed the whole picture of the USG’s activities in this regard. Considering the wide-ranging instability and violence across the Middle East and North Africa today one could wonder how much this dirty wars approach by the USG might be a driver of the turmoil.
Many of the architects and advocates for this approach – including George W. Bush, Dick Cheney, Donald Rumsfeld, Stan McChrystal and David Petraeus – have moved on to other things in life; but William McRaven is now the Commander of the Joint Special Operations Command, John Brennan (aka the “assassination czar”) is now the Director of the CIA, and most significantly, Barack Obama continues to preside over ever-growing ‘kill lists’. With two years remaining in his administration it seems unlikely that Obama and this team will be rethinking or reducing the scope of this strategy. The questions of long-term reverberating consequences and potential ‘blowback’ hang ominously.
Scahill concludes Dirty Wars with the question “how does a war like this end?” Chillingly, the conclusion he reaches is that maybe it cannot; and that it risks becoming self-reinforcing and perpetual. Of even greater concern, having set a precedent, other states might choose to follow the USG’s example and begin conducting unilateral targeted assassinations.
While there is no reference in the book to any direct Australian involvement, we know that the Australian Government contributes to ‘five-eyes’ intelligence, and has deployed special forces to Afghanistan and Iraq. The Australian dimension to the dirty wars approach taken by the USG may be a topic for a good Australian investigative journalist.
More broadly, Dirty Wars will add more fuel to the antipathy in some circles towards the USG’s foreign policy approach; and as the Australian Government is perceived to be closely associated with the USG this will almost inevitably reflect on Australia’s global reputation. It behoves, therefore, those working in Australia’s national security sector to be aware of the recent activities of Australia’s closest ally.
Whether this dirty wars approach becomes a common feature of the future or can somehow be recalibrated remains to be seen. To me, however, it seems that the gap between war and law enforcement is reducing in conceptual and practical terms; which, in turn, opens up a whole other realm of discussion and debate.
Marcus Fielding