Dr John Blaxland (Editor)
Australia’s involvement in the liberation of East Timor in 1999 was the most decisive demonstration of Australian influence in the region since World War II and the largest military contribution since the Vietnam War. Australian diplomacy and leadership shaped the events that led to the birth of Asia’s newest nation.
East Timor Intervention is the product of a two-day international conference held in September 2015 on the fifteenth anniversary of the event. The conference was produced by Military History and Heritage Victoria in partnership with the Strategic and Defence Studies Centre at the Australian National University.
It has been over 15 years since the intervention into East Timor and on the eve of the commissioning of the Australian government’s official history, East Timor Intervention brings together a collection of essays from a wide range of participants and observers including: Indonesia’s martial law commander, Kiki Syahnakri, defending his record; the country’s first president, Xanana Gusmão, on the resolution and poise of Timor’s resistance fighters; and, significantly, the commander of the International Force, Peter Cosgrove, on the conduct of the operation itself. The conference was the first time that these three key personalities had been in the same room since 1999.
Other Australian contributors include Hugh White, Mike Smith, Michael Maley and Martin Hess on aspects leading up to the intervention; Chris Barrie, Mark Evans, Neil Thompson, Michael Crane, Gary Hogan and Ash Power on different aspects of the operation; and David Connery, Bob Breen and Damien Kingsbury on the lessons and legacies of the intervention. Other international contributors include Kevin Burnett on the New Zealand contribution, Orlando Ambrocio for the Philippines, Surasit Thanadatang for Thailand, and Joanne Wallis for the East Timorese perspective of the intervention.
John Blaxland as the editor has contributed tremendous introductory and concluding chapters and together this impressive collection provides a uniquely multi-dimensional perspective and includes significant new outlooks on regional security and the role Australia can play in regional security and stability.
John Blaxland is a senior fellow at the Strategic and Defence Studies Centre at the Australian National University and writes about military history, intelligence and security, and Asia-Pacific affairs. He is former director of joint intelligence operations at Headquarters Joint Operations Command. In September 1999 he was the lead intelligence staff officer on Headquarters 3rd Brigade, the principal Australian land force formation that deployed to East Timor as part of the intervention. Blaxland is author of several books, notably The Protest Years (to be published November 2015); The Australian Army from Whitlam to Howard; and Strategic Cousins.
East Timor Intervention includes a short foreword by the Honourable John Howard – the Australian Prime Minister at the time of the intervention – as well as a map and several images. The book includes a list of abbreviations, a detailed index and bibliography as you would expect for an academic publication, as well as a time line of key events.
East Timor Intervention is a significant collection of different and sometimes conflicting perspectives on the INTERFET intervention – which makes it both informative and valuable. East Timor Intervention is recommended to students of military history as well as international relations. 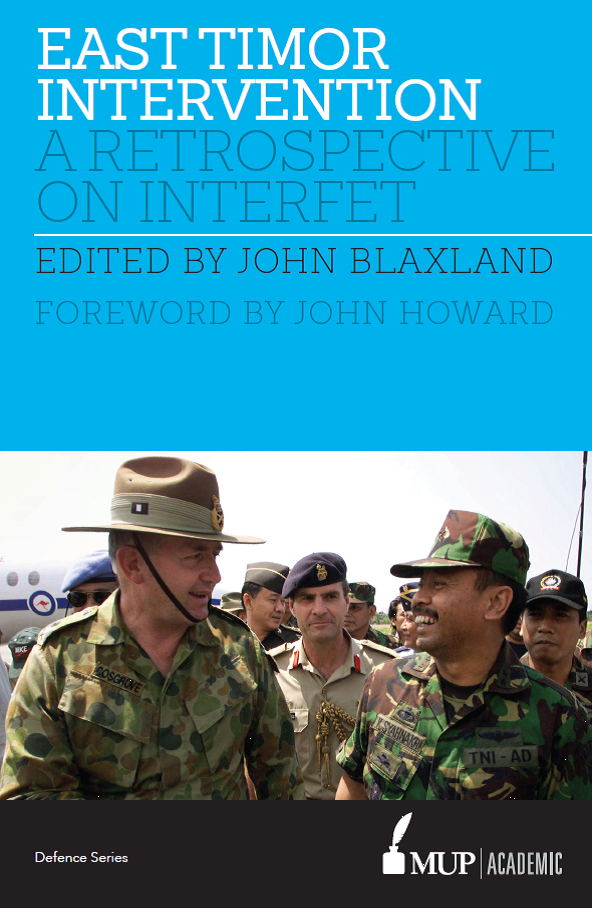