A Noble Son Fall‚Äôn to Earth

It is thought that about 600 or so Australians served with the RFC, the RNAS or the RAF in the Great War. In a number of cases some of these 600 had paid their own way to England to realise their flying dream and it is recorded that over 100 lost their lives as result of their war service. One of those young Australians who died in the service of the RFC was Lt. Lyle Buntine, the eldest son of the Principal of Caulfield Grammar School. An outstanding athlete and medical student, he joined the AAMC, was commissioned into the British Army, saw active service on the Western Front during the early months of the Battle of the Somme in 1916, and was severely wounded in a gallant flying action for which he won the Military Cross – before he won the MC he had been shot down six times. 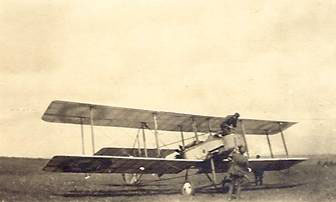 Tragically killed in a flying accident in Scotland some months later, his family mourned his death from afar and collected and preserved every artefact and 160 letters and associated correspondence and papers from their ‚ÄúNoble Son Fall‚Äôn to Earth‚Äù written and collected by Lyle during his two years of active service. The efforts of his family and school to preserve his memory and honour his sacrifice are notable amongst Australians, especially given that he was not an ANZAC and is seen by the AWM as being killed in the service of another country.

Dr Daryl Moran is a school teacher who holds a Doctorate in Educational Leadership from the University of Melbourne. A committee member of Military History and Heritage Victoria (MHHV), he has acted as convenor for conferences at the RAAF Museum Point Cook Air Force about Australia‚Äôs Air War in World Wars I and II. Daryl is completing a Master of Arts degree at Monash University where he has been undertaking research surrounding ‚ÄúWar and Memory‚Äù with a focus on World War 1. In particular he is studying the manner in which schools and society of the time prepared boys for military service, encouraged their enlistment into the armed forces of the Empire and marked their service and sacrifice.