The National Vietnam Veterans Museum is proud to present Lunch with Bryan Dawe, A Satirist‚Äôs Journey, on Friday 5 August 2016 starting at 12 noon.

Bryan Dawe is one of Australia‚Äôs finest political satirists. He has enjoyed a long career on radio; television, film and the speakers‚Äô circuit.

On television he is best known for his work with fellow satirist, John Clarke, on the ABC 7.30 program and for his role in the much acclaimed ABC Television series ‚ÄòThe Games‚Äô. Bryan has also appeared in various films including the hit Australian film ‚ÄòThe Castle‚Äô.

A Satirist‚Äôs Journey is a highly amusing and deeply poignant story in which we also learn about Bryan‚Äôs early influences, his life in the music industry and song-writing career and how he created his two endearing characters, Roly Parks and the outrageous doyen of The Melbourne Club, Sir Murray Rivers QC. We also learn how Bryan and John Clarke began their enduring creative partnership.

Tickets, $35 and $30 concession, can only be purchased online by clicking here

Price includes a light lunch, the holographic Light & Sound Show, a guided tour through the Museum and, of course, Bryan Dawe. Beer or wine available at bar prices. There are limited seats and booking is essential. For more information please contact Sonia at NVVM 03 5956 6400 or sales@vietnamvetsmuseum.org 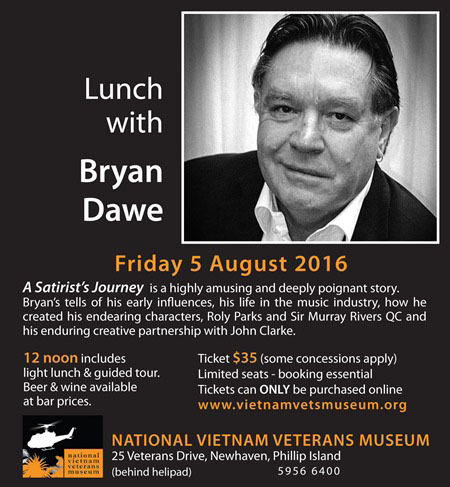