Mud and Blood, Meg McNena’s compelling 80-minute, six-actor play, is about distinguished Australian general, Harold ‘Pompey’ Elliott, who led the Essendon Rifles and took most of them to WWI. 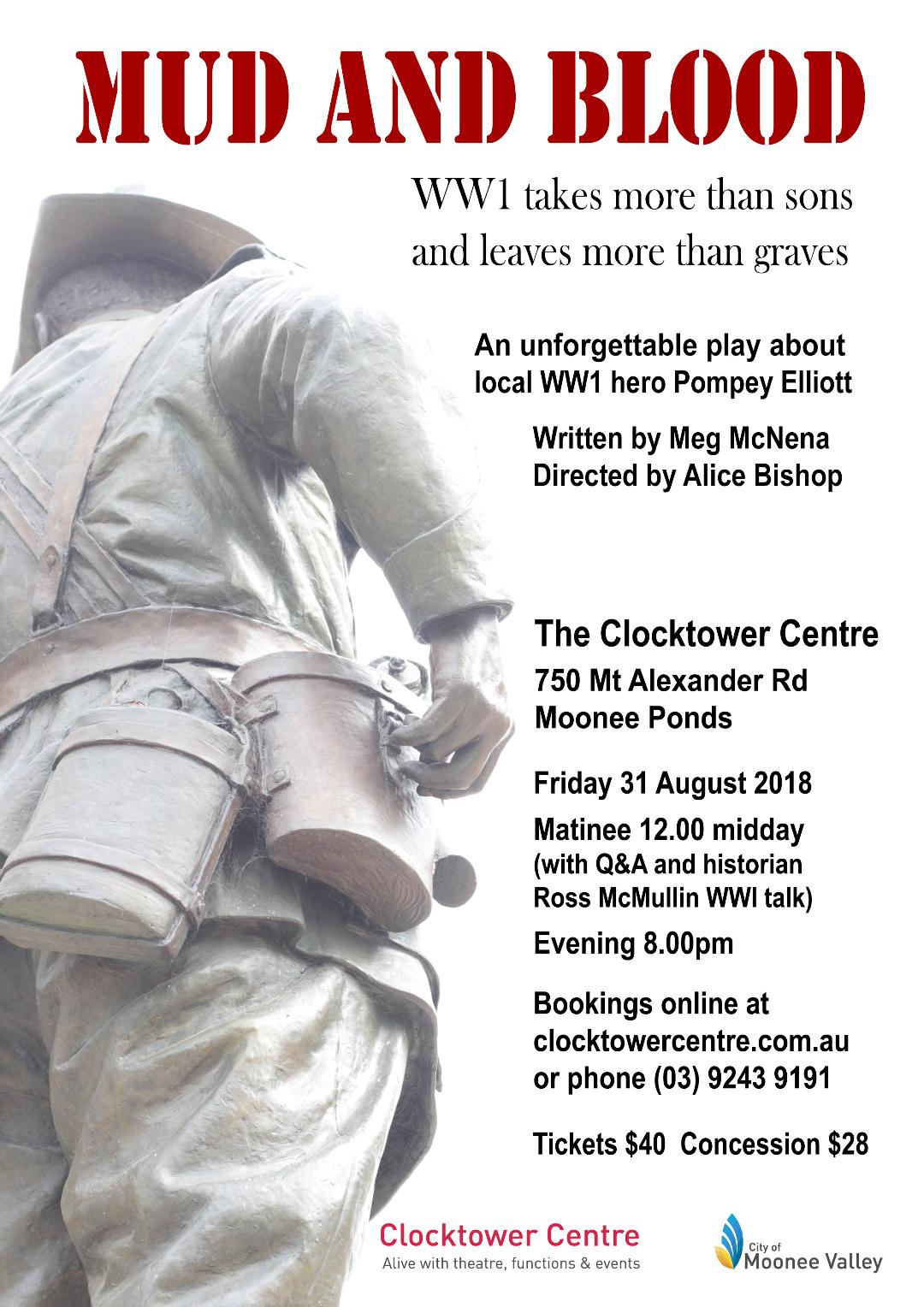 The tenacity of Australian men and women is shown in battle and at home. Timing in 2018 with Anzac and Armistice centenaries adds impact. Set 1914-1921, it shows how Pompey Elliott and a soldier’s mother deal with his vow to look after ‘his boys’ in war as if they were his own. This vow, driving the play’s drama, was made at a farewell to troops a century ago at Essendon Town Hall, now the Clocktower Centre, where Mud and Blood will be centre-stage on Fri 31 August. Women’s efforts and struggles are also pivotal . Please share in your networks and newsletter this opportunity to see a story about local heroes by a Moonee Ponds writer.

A brilliant cast and skilled production team is powerfully directed by Alice Bishop, who has been nominated for a Green Room Award for best director. Writer and producer, Meg McNena, has an Amnesty International Award and others for writing; this is her sixth play staged. Darren Mort, a lawyer like Pompey,plays his complex character masterfully. Humour and songs intone the era.

Mud and Blood‚Äôs Melbourne premiere is at the Clocktower Centre, Moonee Ponds at 12 noon on Friday 31 August with a Q&A and talk by Ross McMullin, awarded historian, biographer and author of two books on Pompey Elliott (included in the matinee price) and opening night is 8pm 31 August.

Elliott trained youth in the Essendon Rifles militia; three units of his 7th Battalion came from the Northern suburbs and one from the Western suburbs; they trained at Broadmeadows and went with him to Gallipoli, Lone Pine, Fromelles and trenches of The Somme, where Elliott turned the outcome of WWI in the Allies favour. Pompey inspires as husband, father, brother, friend, leader, veteran and senator – the soldier before and after war; the stalwart wife keeps the family going; the cost for Pompey in making this heartfelt but impossible promise and returning to unveil honour boards and memorials.

We want to share this significant history of world-changing times for the newly declared nation of Australia and to increase awareness of post-traumatic stress disorder.

Here is the vox pop from our successful preview in Charlton, where Pompey was born.