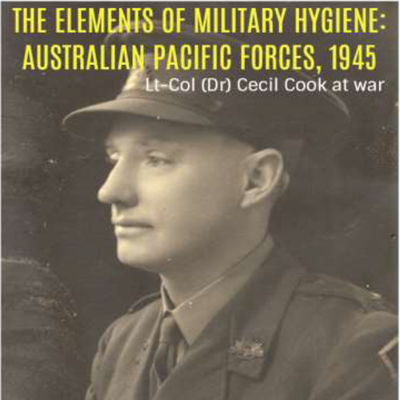 Military hygiene is an essential component of any war effort. In the severe tropical climate of the Second World War’s Pacific theatre, disease disabled and killed more Australian troops than the enemy did.
Dr Cecil Evelyn Aufrere Cook (1897-1985) CBE, MD, DTMH, DPH, RACGP, ACMA joined the Commonwealth’s Military Reserve as an honorary captain in 1932. He was Medical Officer for the Darwin Garrison until 1938, when he was appointed Garrison Commander. In 1939 he joined the School of Military Hygiene as a lecturer and until 1941 was a Medical Officer in 4 Armoured Regiment. Cook enlisted for war service in 1941 and was demobilised in February 1946, with the rank of Lt-Col AD-H (HQ).

Military Hygiene applies at three levels – personal, camp and region. Dr Cook addressed all three levels and made special studies of regional hygiene profiles before occupation (Morotai Island), before battle (OBOE 1 Tarakan and OBOE 2 Borneo) and after victory (Japan). This talk examines Cook’s studies of Japan to prepare the Commonwealth Occupation Force for their engagement in that country.

With assistance of some images the talk will describe the scope and content of his hygiene training regime and reports on hygiene risks in Japan, as well as background information. A brief written paper for participants provides details of Cook’s military and civilian roles and awards in his career of over 50 years. A more detailed written paper will be available after the talk.

BARRY LEITHHEAD is a retired management consultant specialising in corporate governance, an author, presenter and historian. He is the author of A Vision for Australia’s Health: Dr Cecil Cook At Work (Australian Scholarly Publishing, 2019). His partner Robin McIntyre is Cecil Cook’s daughter.

The presentation is scheduled live for 11:00AM AEST on Saturday, 16 October 2021. It will be accessible online via Google Meet. If interested please register by emailing the President at president@militaryhistorynsw.com.au (mob: 0419 698 783) and follow the instructions below. 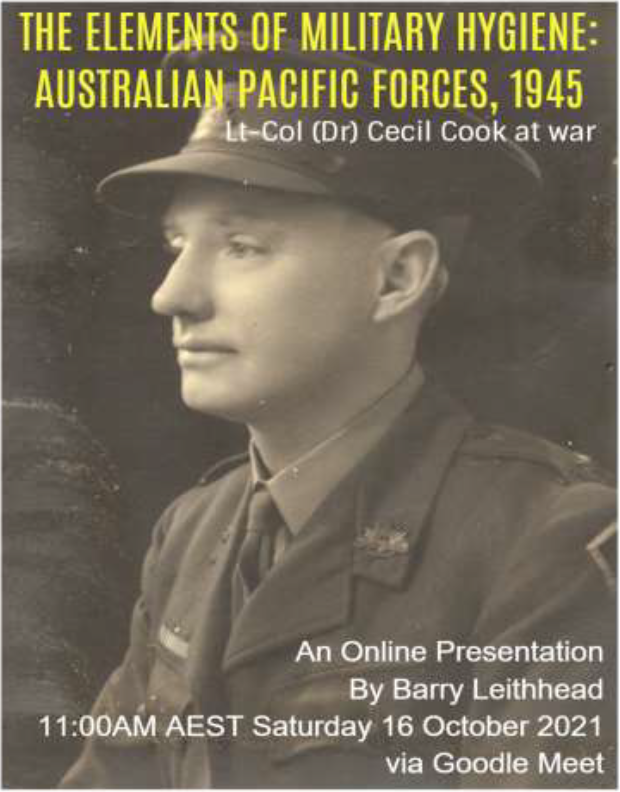