The Ottoman Defence against the Anzac Landing 25th April

Here is a rare opportunity to hear from an internationally renowned scholar about arguably the most important battle of the Gallipoli campaign from the Ottoman perspective.

The Ottoman Defence against the Anzac Landing: 25 April 1915 places us one step closer towards better understanding the events of this fateful day. The landing at Gallipoli on 25 April 1915 represents a significant moment, not only for Australia and New Zealand, but also for Turkey. Yet, despite a plethora of accounts of the landing from the allied perspective, a detailed account from the Turkish perspective had not been published in English until now. 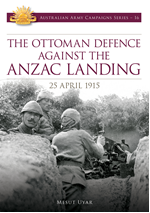 The Ottoman Defence begins to address this imbalance in recording and understanding historical events. The challenge to clarify the fog and confusion of war has led the author to focus exclusively on that key first day of what would become an 8-month-long battle.

Using Ottoman military documents, regimental war diaries, personal accounts and memoirs, Uyar describes the unfolding campaign, unravelling its complexity and resolving many of the questions that have dogged allied accounts for a century.

Significantly, Uyar resolves the enduring controversy about the presence of Ottoman machine guns. He confirms that while machine gun positions had been prepared on Ariburnu, on 400 Plateau, and near the Fisherman‚Äôs Hut, the initial pre-dawn landing was not opposed by machine guns, which had been kept in reserve. The first four machine guns arrived at Scrubby Knoll on Third Ridge around 0740 hours, and four more arrived at Chunuk Bair around 1000 hours. Four more arrived around 1530 hours.

The Ottoman Defence enhances our understanding of the Ottoman military forces of the time and why they proved so successful in containing and ultimately defeating the Allied invasion. It helps to provide a more balanced and complete understanding of the chaotic events of that day and as such is both interesting and valuable to students of military history.