A century ago all Australians knew the name of Albert Jacka VC. His daring action at Courtney’s Post, Gallipoli, won him the first Australian Victoria Cross of the Great War and the adoration of a young country. Jacka was a natural-born soldier – intelligent, athletic and utterly fearless. A true Aussie rebel, Jacka stood up to Top Brass who were throwing away the lives of his brothers in arms. Now his EPIC story comes to the stage at last.JACKA V.C. LEGEND OF GALLIPOLI is a new Rock Musical that re-invents the Anzac legend for a new generation of Australians in thrilling and captivating style. The action, the sets, the lighting and more than twenty original songs will transport you back to the trenches with Jacka and the men of the 14th Battalion. Witness action, drama, romance, comedy and tragedy as you follow Jacka‚Äôs Mob from Gallipoli to Egypt, the United Kingdom and the muddy fields of the Western Front. 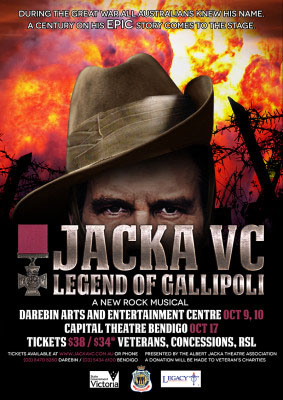 This musical will knock their socks off, and Australia has never seen anything like it before. It is an incredible roller-coaster ride of emotions. There are 6 battles, a number of (Aussie larrikin) comedy routines including a football-rugby stand-off, a casino/bar room brawl in Cairo, a song about ‚Äòtwo-up‚Äô, and the love story set in Scotland. With sets, costumes, and pyro-technics it will fully engage the audience. There will be a 25 piece orchestra.
Music and Lyrics by William James Smith. Libretto based on the original novel ‘Hard Jacka’ by Michael Lawriwsky as adapted by William James Smith. Orchestration by Nicholas Buc. Choreographer: Melanie Moravski Dechnicz. Lighting Design: Michael Brasser. Sets and Costumes: Valentina Serebrennikova. Musical director: Timothy Wilson. Directed by William James Smith. Starring: William James Smith, Susannah Gidley, Andrew Lees, Andrew Davies, Jonathan Rumsam, Phillip Hunting, Leonie Thompson, Tarik Vann, Scott Bailey, Viktorija Fedorko, Tim Haughton, Anthony Julian, Andrew McGrail, Michael Angelico, Ash Ocal, Chris Dziuba.
This production has been generously funded by the Victorian Anzac Centenary Committee. Part of the proceeds will be donated to veterans‚Äô charities.

Please find below a 6 minute video clip that shows a recent rehearsal of the Jacka VC musical cast including interviews with composer Will Smith and myself.