Join war historian Jen Hawksley from the University of Wollongong

to discuss aspects of her research into Australian parents who were institutionalised after losing their son(s) during the First World War and returned soldiers who were treated in hospitals for shell shock and other war-related psychological conditions. Jen will conceptualise an unprecedented national trauma at the microcosm of the individual patients, their families and the doctors who tried to treat a generation permanently scarred by war. 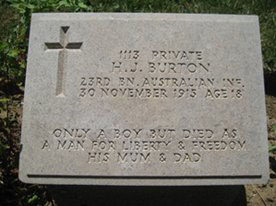