Elva Cunningham (Nee Dykes), after a lifetime of waiting, is very proud to invite you to the launch of her father‚Äôs WWI diaries:
If ever you wanted to know what a soldier of the AIF had to endure in the First World War ‚Äì this will tell you! 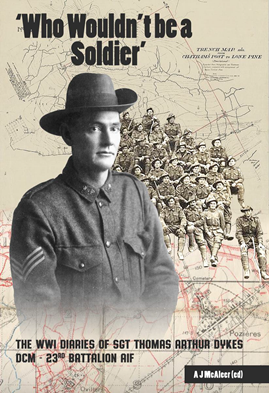 Sgt Thomas Arthur Dykes spent his war recording his experiences with the AIF‚Äôs 23rd Battalion in nine small, pocket sized diaries. Published for the first time, they are the raw, uncensored and sometimes graphic account of an infantryman‚Äôs daily struggle to survive the Gallipoli campaign and the horrors of the Western Front.

At the age of thirty-two, married with four children, he volunteered to serve his country in its hour of need. He travelled with his unit to Egypt, survived the sinking of the troopship ‚ÄòSouthland‚Äô before spending months in harsh conditions on Gallipoli at Lone Pine until he was evacuated wounded.

From here he is thrown into the killing fields of the Western Front; from Fleurbaix to the Somme to Ypres to Flers, until he fell victim to the winter of 1916/1917 and a severe dose of trench foot. A year out of the line, he returned for the final push of 1918 and was awarded the Distinguished Conduct Medal for his courage and bravery at Mont St Quentin.

To be Launched by: Major-General Mike O‚ÄôBrien CSC Military Historian and President of the Royal United Services Institute of Victoria