This exhibition highlights the images of soldier photographer E K Burke, who served with the 1st Australian Signals Squadron in 1918-1919.Burke was both a signaller and a photographer, and the exhibition shows images of not only the operations of the signals squadron from training through embarkation to the deserts and mountains of the then Mesopotamia, Persia and Kurdistan, but also images of everyday life and places in those regions through his ‚Äòmilitary tourist‚Äô eye.
The British and Indian Army offensive to capture Baghdad in Mesopotamia (now Iraq) ended in ignominious defeat at the hands of the Turks in 1916.¬† But with fresh resolve new forces were assembled which captured Baghdad in March 1917, supporting the Palestine campaign and keeping pressure on the Turkish armies as they retreated.¬† With the collapse of the Russian Armies in the region because of the Russian Revolution, a new mixed Imperial and colonial unit initially called Dunsterforce, attempted to support and train local militias in Persia (now Iran) to keep the pressure on the Turks and their German allies in the theatre. With the end of the war, Allied forces remained in place and also moved into northern Kurdistan to keep the peace. Throughout the campaign in Mesopotamia, Persia and Kurdistan, an Anzac signals squadron and later an all Australian signal squadron supported the far flung operations in these regions, providing signals intelligence as well as strategic and tactical communications as they trekked using horses, mules and Ford motor vans. The last troop of the 1st Australian Signal Squadron did not return home until November 1919, the last AIF unit to do so. 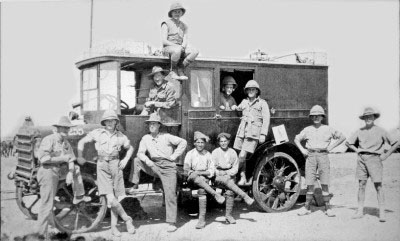 Dr Andrew Kilsby is an independent historian.¬† He has convened numerous military history conferences and curated exhibitions, as well as written several military history books, including The Forgotten Cruiser (with Greg Swinden) and The Riflemen.

He was curator for the exhibition With Horse & Morse in Mesopotamia & Kurdistan 1918-1919 at the Highway Gallery, which highlighted the images of signaller-photographer E K Burke.

Wednesday 17th August ‚Äì Sunday 11th September 2016 between 12 noon and 4 pm. The Gallery is open Wednesday through Sunday each week.