Understanding the purpose and development of any fortification requires its ‘trace’ to be established (the outline of the fortification at a particular development stage). However, in the case of the group of fortifications constructed along the shores of Hobson’s Bay after 1854, a total lack of plans for the earliest 1854 and 1864 fortifications provides a particular dilemma. In early September 2012 a small group of members from the Military History and Heritage Victoria Inc. and a similar group from Fort Queenscliff Museum were allowed access to Fort Gellibrand to carry out an examination of its present trace and to ascertain what remained of the early battery structures.

For most of its existence, Fort Gellibrand was known as Williamstown Central Battery and dates to the defences established in 1860-1865; mostly under the supervision of Captain Peter Scratchley R.E. In 1860 Scratchley had provided Victoria with a plan of his intended defence positions for Hobson’s Bay, which can be found in the Victorian Parliamentary Papers. This shows the central battery as two 5 gun emplacements; the eastern section defending the approach to the anchorage in Hobson’s Bay, the western section defending the waters directly off Point Gellibrand. However, a sketch plan held in the State Library, which dates to 1865 and compares the 1860 Scratchley Plan and the 1865 Commodore Wiseman Report, establishes the actual trace of the Central Battery (b).

An editorial in the Argus Newspaper of July 22, 1863 confirms that the trace indicated in this sketch map is correct and also provides the reasons behind the alteration:
‘The central battery, the next fortification, is intended for ten guns, but its present armament consists of seven thirty-two pounders, worked on wooden platforms. This battery, which has been strongly built, with a view of carrying two tiers of guns, has a couple of faces. Owing to the contour of the ground, they are separated from each other but are joined by a Redan shaped connecting parapet. Inside the face of the Redan, looking southwards, there is a banquette, or continued step, for riflemen to stand upon to fire over the parapet.’

This trace is clearly visible in the General Plan of 1892. It remained the underlying battery form through several periods of alterations to the embankments, ordnance and gun emplacements. 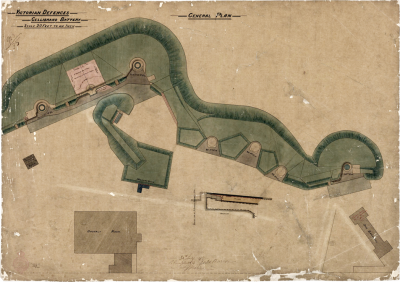 The first trace was altered in 1870 as the battery had fallen into a state of disrepair. At this time the 1863 battery 32-pdr (pounder) SB (smooth-bore) weapons were placed in storage and their obsolete wooden platforms were replaced with stone footings and new racers for three 80-pdr Armstrong RML guns, one 300-pdr, 9-inch RML (rifled muzzle-loading) gun, and three 68-pdr guns; each gun in new or a restructured embrasures. Another significant aspect examined by the study group was the first (1864) magazine which is perhaps the oldest remaining intact portion of the original battery and can be linked to a £775 building contract published in 1863 in the Ballarat Star newspaper. The magazine had been buried and forgotten until footings for a memorial to fallen members of the 2nd Commando Company of the 1st Commando Regiment based at Fort Gellibrand were being excavated. The intact magazine was unearthed and is now fully restored.

In several aspects it matches the severely damaged Right Battery Magazine discovered during a grandstand refurbishment at Williamstown Sports Oval in 2011 and partially excavated by archaeologist Geoff Hewitt and then reburied. It is also a close match to the Shortland’s Bluff Battery magazine rediscovered at Fort Queenscliff in 2011 (the extant ‘Magazine H’). Both of these magazines date to circa 1863-1864. On the Left flank of the Gellibrand Battery is a small basalt shed dated to c.1862-64. This is an Artillery store that can be firmly linked to a plan held in the National Archives of Australia collection.

The final structures visited were the HP gun emplacements of the 1886-89 trace and their related underground magazine. At this time Gellibrand battery was the only remaining battery at Hobson’s Bay and was equipped with one 38 cwt. (2 ton) 5-inch gun (1887), and with two 3 ton, 5-inch BL guns (1889), all on hydro-pneumatic carriages. Centrally a single QF 6-pr (1889) on a HP pillar was emplaced on what had been the rifle Redan projecting from the battery centre. Directly below this position is a substantial two room magazine (1889) surrounded by a series of shell hoists and lamp passages. The magazine, although long ago stripped of its shelving and equipment, has been partially refurbished and is now in excellent condition.

Towards the end of the western flank of the battery two 300-pdr 9-inch RML’s are now located in the old 80-pdr emplacements. The records show only one of these 9-inch guns was emplaced at the Central Battery and the second gun is probably linked to the Lighthouse Battery. In 1915 Prahran Council were offered, ‘for ornamental purposes’, a choice between two 9-inch guns or two 32-pdr guns held at Williamstown. Given the high cost of moving the two 12-ton, 9-inch guns, plus their extremely heavy iron Elswick carriages, it appears they thankfully remained in situ.
By August 1922 a decision had been made for the old battery gun emplacements to be dismantled. The Argus reported:
‘…the immense mounds of earth and masonry which shelter them will also be removed, together with the cordite magazines and other small buildings.  Ultimately the 11 acres of land comprising the whole area of the fort enclosure will probably be used as an exercise ground for horse drawn guns. The spacious drill hall will also be retained. ‘
Instead, the old emplacements rapidly fell into disrepair. Sometime before 1936 Fort Gellibrand became a range for the 6th Heavy Brigade RAA, which held annual ‘fire practices’ after two 4.7-inch QF (quick-firing) guns were mounted on the old battery pedestals, and Fort Gellibrand was periodically used as a gun proofing range by the Australian Army during the 1950’s.