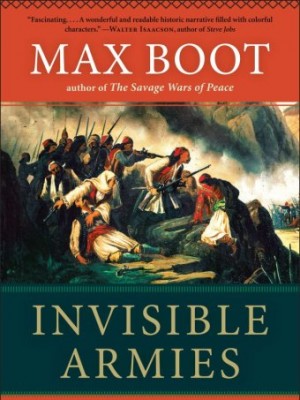 Max Boot is a very capable historian and in Invisible Armies he traces guerrilla warfare and terrorism from antiquity to the present, narrating nearly thirty centuries of unconventional military conflicts.

Boot masterfully guides the reader from the first insurgencies in the ancient world, through the Jewish rebellion against the Roman Empire to the horrors of the French-Indochina War and the shadowy, post-9/11 battlefields of today.

He demonstrates that, far from being the exception, loosely organized partisan or guerrilla warfare has been the dominant form of military conflict throughout history.

Since ancient times, individual radicals, disadvantaged groups, and angry populations under occupation have resorted to terrorism and guerrilla warfare as the only military means available when facing stronger and more conventional forces. Hiding in the shadows and emerging to attack where they are least expected they seek to cause enough protracted pain to persuade their enemies to give up.

Boot’s coverage is comprehensive, taking in revolutionary movements and anti-colonial resistance campaigns, special forces working behind enemy lines and large-scale counterinsurgency operations, the revolts of Bar Kokhba and Robert the Bruce, the political violence of John Brown and the Ku Klux Klan, as well as charismatic guerrilla leaders such as T.E. Lawrence and Che Guevara.

Boot breaks up this grand historical sweep into eight books that group several historical case studies with common elements. He sustains the reader’s interest with lively writing and sharp characterizations of many memorable characters – from Italian nationalist Guiseppe Garibaldi to the ‘Quiet American’ Edward Lansdale – including several anecdotes on the personal hygiene and sex lives of some guerrilla leaders. Invisible Armies includes a table of insurgencies since 1775 (noting his predominant American audience) as well as 70 illustrations and eight maps.

Invisible Armies includes a significant number of terrorism case studies which Boot argues is distinct from guerrilla warfare largely on the basis that terrorists hope through a few spectacular attacks to trigger a revolution. His observation that “Unlike guerrilla warfare, the most ancient form of warfare, terrorism is strikingly modern” is insightful. He believes that terrorism has been made possible by the development of four relative recent phenomena: destructive and portable weaponry, such as dynamite and pistols; the mass media, which publicizes their attacks; literacy, which enables terrorist groups to recruit educated operatives; and secular ideologies that focus on nationalistic and socioeconomic issues.

Boot deduces that although guerrillas, insurgents, and terrorists have had their successes, the strong more often prevail over the weak. But he also identifies that invisible armies work best when they have support from another state, are able to build up political support, and link up with (or become) even more visible conventional forces.

Boot concludes his historical analysis with a chapter titled “Implications” in which he derives twelve observations about guerrillas and guerrilla warfare. He teases each of these throughout the book. The twelve observations are historically sound and would be useful to a practitioner in developing doctrine and strategies to counter-insurgencies. They include: “The most important development in guerrilla warfare in the last two hundred years has been the rise of public opinion” and “Establishing legitimacy is vital for any successful insurgency or counter-insurgency – and, in modern times, that is hard to achieve for a foreign force or government.” As ever, though, the first challenge is to understand what sort of war you are actually fighting – not necessarily easy in this post-colonial, post-Cold War world where the role of the state is waning and technology has an increasing influence.

While Invisible Armies ends its analysis at around 2010 and does not consider the events of the ‘Arab Spring’ or Syria over the last few years, or indeed the ‘end-game’ in Afghanistan, it is a valuable contribution to this field of study and has appeal to both military historians and military practitioners.