Kismet: the story of the Gallipoli prisoners of war by Jennifer Lawless – Book Review

Kismet is an account of the experiences of 67 Australian soldiers captured by the Ottoman forces at Anzac during the Gallipoli campaign. Doctor Jennifer Lawless has leveraged a wide range of sources to collate a comprehensive account. She researched deeply in the Turkish archives and visited many former prison camp sites.

Most of the prisoners of war (POWs) were paid to work on the railways in Turkey, building a line from Berlin to Bagdad. Contrary to popular belief, they were not poorly treated. While Lawless found some embellished their writings as they wanted “revenge on the people who had held them captive”, there were many examples of kindness, and for POW officers the biggest problem was boredom. To entertain themselves they would go on hunting expeditions and write and perform plays. As there were no female prisoners, young male officers would dress up as women, one British officer, “Sonia”, looking quite the part. The POW officers had their own private homes and were even provided with a housekeeper.

Over the years of research, Lawless came to know the personalities well and developed a few favourites. One of those was Lieutenant Leslie Luscombe. “He was such a sweetie”, Lawless said. “He would send money anonymously to the men to buy food.” He wrote a book about his experiences, entitled The Story of Harold Earl, Australian.

The lower ranks lived in camps with communal eating arrangements, and although they were required to work, they also had access to alcohol and brothels. Cultural misunderstandings were frequent. The Australians were expecting the Turks to be “little squat, dark men with moustaches”, mistaking the “European-looking” soldiers for Germans. Used to a diet rich in meat, the Australians were unimpressed by the Turkish menu of vegetables and legumes they considered “food you would feed the chickens on”. “They were not starving and they were not beaten to death”, Lawless writes, but of the 67 POWs, 24 (36 per cent) died, half in Turkish field hospitals from their wounds and the remainder from the epidemics raging through the country at the time.

Lawless is the History Inspector for the New South Wales Board of Studies and is responsible for the development of history syllabi in New South Wales. Lawless has written over a dozen history text books used in Australian schools and Kismet was originally her doctoral thesis – hence the academic flavour.

Kismet includes a few black-and-white tables and maps in the text as well as 12 pages of black-and-white images. There are extensive notes on sources and a bibliography, as well as a comprehensive index. Six appendices cover a literature review on Australian World War I POW books and articles; a profile of the 67 soldiers; the Hague Convention of 1907; the Turkish manual concerning the handling of POWs; resident patterns for individual camps; and a summary of the health of the 43 POWs who survived.

Kismet does not include the experiences of the 32 crew members of HMAS AE2 who were captured on 30 April 1915, or the Australians that were captured by the Ottomans during the Mesopotamian campaign. The account would have been more complete if it had additionally included the other Australians who were POWs to the Ottomans.

For those with an interest in the POW experience, Kismet is highly recommended. 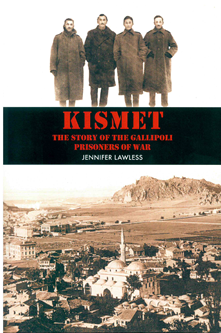