KL: a history of the Nazi concentration camps by Nikolaus Wachsmann – Book Review

Of an estimated 2.3 million prisoners who entered the hell of the Nazi concentration camps, over 1.7 million were killed, whether gassed or worked to their skeletal ends. Many went straight to their deaths, including about 870,000 Jews murdered on arrival and without registration at Auschwitz; others endured a slower annihilation, reduced to what Hannah Arendt called “ghastly marionettes with human faces”. When the subject of concentration camps is raised, most people these days immediately recall imagery from the liberation of the Auschwitz camp in 1945, but Nikolaus Wachsmann offers an unprecedented account of the Nazi concentration camps from their inception in 1933 through their demise in the spring of 1945. His book KL is a landmark history of the Nazi concentration camps, or ‘Konzentrationslager’.
The Third Reich has been studied in more depth than virtually any other period in history, and yet until now there has been no history of the camp system that tells the full story of its broad development and the everyday experiences of its inhabitants, both perpetrators and victims. In KL, Wachsmann fills this glaring gap in our understanding. He not only synthesizes a new generation of scholarly work, much of it untranslated and unknown outside of Germany, but also presents startling revelations, based on many years of archival research, about the functioning and scope of the camp system.
Examining, close up, life and death inside the camps, and adopting a wider lens to show how the camp system was shaped by changing political, legal, social, economic, and military forces, Wachsmann produces a holistic and unified picture of the Nazi regime and its camps that we have never seen before. In the process it clears up some misunderstood beliefs and showcases how the Nazi march toward the Holocaust was based on a continuum rather than an overnight momentous decision.
Wachsmann demonstrates how the first concentration camps – makeshift holding cells really – were first set up in 1933 after Hitler came to power. The purpose of these camps was to intimidate and ‘rehabilitate’ all kinds of political opponents such as the Communists, as well as those declared ‘work shy’ and drunks. Interestingly, at least in the beginning, the KL was by no means guaranteed to become a permanent fixture of the Nazi regime; the judicial authorities increasingly lambasted the KL not least because they had the potential to tarnish Germany’s international image. Were it not for Hitler’s decisive intervention, the KL would have faded away sometime in the mid-to late 1930s.
The camps were rekindled in the late 1930s after Hitler, Himmler and others set their plan for a ‘Master Order’ based, in effect, on race. The Camp SS who devised and ran the system regarded themselves as ‘political soldiers’. Jews, gypsies and homosexuals started to be specifically targeted after 1938, although even until 1941 or so, the main plan was physical and mental intimidation, financial extortion and forced migration.
It was only in 1942 that the plan turned toward extermination; the Wannsee conference was an important touchstone (although again not the most important or the only one). But even here, the methods for extermination were based on older ones. Killing by gas was a legacy of the horrific T-4 euthanasia programme of the 1930s. Wachsmann also reminds us that the Holocaust did not suddenly start with the gas chambers, but was initiated by the SS Einsatzgruppen killing squads in the Ukraine and the Soviet Union. Also, the first casualties of many of the camps were not Jews but Soviet POWs.
The book also demolishes some myths. One myth is the belief that the Holocaust somehow sprang fully from someone’s head or signature or from a single conference in 1942. As the book demonstrates, this is not true. The whole programme grew out of an escalation of historical acts from the 1930s onwards, sometimes through accidents and fits and starts.
The other myth the book addresses is of Auschwitz somehow being the most gruesome emblematic symbol of the Holocaust. As terrible as Auschwitz was, the book makes it clear that unlike Auschwitz, four other camps (Treblinka, Sobibor, Belzec and Chelmno) were dedicated exclusively to extermination. Auschwitz was also a labour camp; this fact was valuable because it allowed many survivors to escape and tell their stories. However, an unintended side effect of their unforgettable testimony is the belief that Auschwitz stood for everything the Holocaust stood for. As the book documents in great detail, reality was more complicated.
Wachsmann talks about all of this as well as the mind numbing bureaucracy that permeates even an unimaginable atrocity like the Holocaust at great length. Yet the prose in this large volume is remarkably readable, partly because somehow he still finds space to focus on individual personalities, from the infamous to the mundane. He never lets us forget that the Holocaust was perpetrated by many ordinary people, and this remains perhaps the most disturbing fact of all. In all, over 1.7 million people died in the Nazi KL – the majority in the last two years of the war.
Wachsmann is professor of modern European history in the Department of History, Classics and Archaeology at Birkbeck College, University of London. KL is his second book and includes a large number of black and white photographs as well as a good number of clear maps. As a scholarly work the sources (bibliography) and notes are extensive – indeed the notes run to 144 pages.
This is quite definitely the most panoramic, nuanced and authoritative view published until now, not just of the camps per se but of their historical evolution. Painful and gut-wrenching to read in many places, but a necessary and very valuable contribution even to the mountain of literature that exists about the Third Reich. KL is a boldly ambitious work of deep importance and unlikely to be surpassed. It will appeal to all manner of historians and is destined to be a classic in the history of the 20th century. 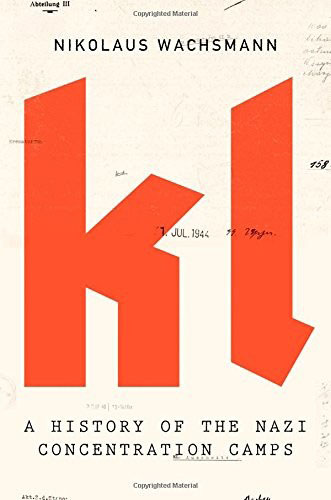