Alexander Bruce Tulloch was born on 2 September 1838 and educated at Sandhurst.
Tulloch joined the 1st Royal Scots as an ensign in May 1855. He became lieutenant of that regiment in 1857; a captain in the 96th Foot in 1864; a captain in the 69th Foot in 1866; brevet-major in 1877; and major in the Welsh Regiment in 1881. Over this period he served in the Crimea, India and China.
As a major in the early 1880’s he worked in the nascent Intelligence Bureau of the War Office, being sent on missions to Belgium, Crete and elsewhere.
In 1882, as the British became increasingly concerned about the security of the Suez Canal – a critical choke point in their global empire, the then forty-four-year-old Major Tulloch offered his services to Lieutenant-General Sir Garnet Wolseley, commander of the British force to invade Egypt.
Tulloch reminded Wolseley of the plan of attack he had contributed to the 1876 Report on Egypt and volunteered to ‘combine business and pleasure’ in a snipe-shooting holiday to Egypt. His offer was accepted.
The mission was politically delicate since Gladstone, Liberal prime minister since 1880, had set himself firmly against intervention in Egypt, but Wolseley was determined the army should be ready for all eventualities including war.
Tulloch investigated the coastal defences at Alexandria and Damietta, gathered information on the Suez Canal, Egyptian army and its supply base, and reconnoitred the ground at Tel El Kebir in the desert east of Cairo, where the decisive battle of the Second Anglo-Egyptian War would later be fought.
Tulloch’s reports contained recommendations as to how to make quick work of things in the event of hostilities. Both sabotage and special operations are considered. ‘It is said that it would take no great amount of Bucksheesh [sic] to have the principal magazine, that at Tourra, exploded,’ he writes coolly to Colonel East on 17 February  from Shepheard’s Hotel in Cairo.
From Alexandria, in a letter dated 5 March, he describes in detail the state of the coastal defences.  For the destruction of one of the batteries, Fort Meiks, he suggests, ‘a boat landing might be effected just west of the fort within 100 yards and the assailants might scramble in to the place on the flank where the wall has fallen down.’
Following the bombardment of Alexandria on 11 July 1882 a 40,000 strong British Expeditionary Force under Wolseley’s command landed in Egypt. Appropriately enough, Tulloch led the successful landing party.  As a result of the action, he was promoted Lieutenant-Colonel and recommended for the Victoria Cross.  In lieu, and given the nature of his work, Tulloch was awarded the Companion of the Most Distinguished Order of Saint Michael and Saint George (C.M.G) for extraordinary or important non-military service in a foreign country.
Following a series of actions, including a significant battle at Tel El Kebir the British Expeditionary Force emerged victorious and then occupied Egypt.
In 1883 Tulloch was promoted to lieutenant-colonel and commanded the Welsh Regiment, seeing service in South Africa and Egypt. He was promoted to colonel in 1886, and then placed on half-pay in 1888.
On 20 September 1889 Tulloch was appointed Commandant of the Victorian Military Forces, with the local rank of Major-General.
In this capacity he also acted as military adviser to the Australian colonies.  In 1892 he presided over the commission appointed by the New South Wales Government to inquire into the military condition of that colony.
Tulloch was instrumental in getting a United Service Home built for specially deserving old soldiers and sailors near Geelong.
In 1890 Tulloch formed the Royal United Services Institute (RUSI) of Victoria based on the RUSI in London of which he was a member.
As the 1890s depression had a sever effect on the ‘beautiful little army’ he had built up, Tulloch tendered his resignation so that the Victorian Government could hire a less expensive Commandant. When he left Melbourne in 1894 he felt that he was almost becoming an Australian and was particularly gratified by the achievements of his ‘Australian boys’ in the Boer War (1899-1902).
Tulloch was awarded the Knight Commander of the Order of the Bath (K.C.B.) in 1902.
Tulloch was a prolific writer and wrote numerous articles and two books on military matters. His first book, Recollections of Forty Years of Service was published in 1903 (William Blackwood and Sons, Edinburgh and London).  Tulloch’s memoirs of the Egyptian Campaign in this book sparked immediate controversy.  The Times Literary Supplement reviewer strongly criticized its author for revealing his intelligence work: ‘future agents of the department will not find their work any easier if their predecessors are not habitually reticent to the last degree as to every detail of their employment.’
Tulloch had unquestionably broken the Code of Silence, a founding tenet of the Intelligence Bureau’s charter.  His chapters on the Egypt Campaign relate in the kind of detail entirely absent from other contemporary memoirs the undercover missions behind enemy lines, counter-espionage operations, press disinformation techniques, and the use of bribery and spies that made up the work of the Special Service officers.
Yet it was Tulloch’s intelligence reports from Egypt, printed and distributed to the French and British cabinets in June 1882, which perhaps had the greatest impact.  With precision he dissects Egypt’s defence establishment and predicts a swift occupation with the minimum of casualties.
Undoubtedly his confidence helped ministers to convince Gladstone to execute one of the great U-turns of nineteenth-century politics, and created the opportunity for what one military historian called ‘the most brilliantly devised and executed campaign of the century’.
Tulloch’s second, and less controversial, book A Soldier’s Sailoring was published in 1912 (Jarrold, London) describes the numerous voyages and travels that he undertook during his military career and has become renowned as a classic.  It has been republished several times and is widely available on-line.
Tulloch died in his native England in 1920 at age 82.
His two books are available in the RUSIV Library. 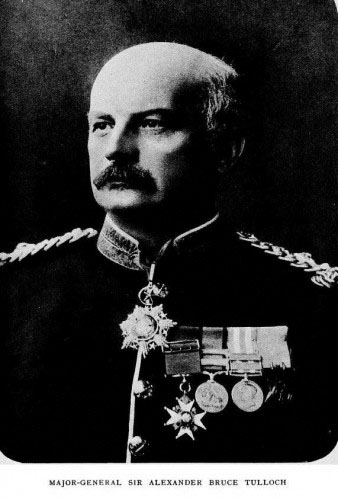