Grantlee Kieza’s biography of John Monash comes on the heels of Roland Perry’s 2014 biography and Tim Fisher’s 2014 quasi-biography. This year has also seen the reprinting of Monash’s 1920 The Australian Victories in France in 1918 and a refreshed collection of his war letters. The bright and colourful cover of Kieza’s book immediately catches the eye and looks like something new and different – sadly, it isn’t.

Kieza’s Monash is a good quality biography but it does not include any new information or insightful judgements about the man other than the blurb material about ‘unconventional’, ‘amazing’ and ‘emblematic of an egalitarian spirit’. It is disappointing that as time goes on biographies tend to become more polarised – the person was either a genius/saint or an absolute bastard; Monash is no exception. To argue these days that John Monash was not the greatest soldier who ever lived almost invites vilification as being ‘un-Australian’. As ever, reality is often less black-and-white. But when Monash died, 300,000 Australians attended his funeral in Melbourne. This, if nothing else, is testament to how well he was regarded at the time. It would be difficult to image a similar number turning out today.

Monash is a lengthy biography with 630 pages of text arranged into 32 chapters and an epilogue. Of the 32 chapters, the first 12 (totalling 210 pages) deal with Monash’s life before the war and the last two (totalling 55 pages) deal with his 12 years of life after the war; so the bulk of the book (18 chapters and 362 pages), not unsurprisingly, deal with his wartime experiences. Monash is well researched and Kieza makes extensive use of quotes. There are a significant number of endnotes as well as a comprehensive bibliography. There are no maps, but the book does include a good number of photographs.

The most different thing about Monash is that is a biography written in the present tense. I am told that this technique is a method to make historical events livelier and perhaps more engaging, but I am not convinced that it works for a biography. The technique may work in autobiography or memoir perhaps, but the reader of Monash would be very aware that World War I occurred a century ago. Additionally, Kieza does not follow a strict chronological sequence, so, while dates jump around, the present tense remains in place. This gives rise to some confusion regarding the flow of events – at least in my mind.

Kieza is a prizewinning writer for The Courier-Mail and Sunday Mail newspapers in Brisbane and has previously written for Sydney’s Daily Telegraph, Sunday Telegraph and The Australian, covering assignments in Europe, America, Asia and Africa. He is a Walkley Award finalist and the author of the bestselling biography Bert Hinkler: The Most Daring Man in the World. Monash is his tenth book.

If you have not read a biography about John Monash before – and the present tense technique does not grate – then Monash is recommended. 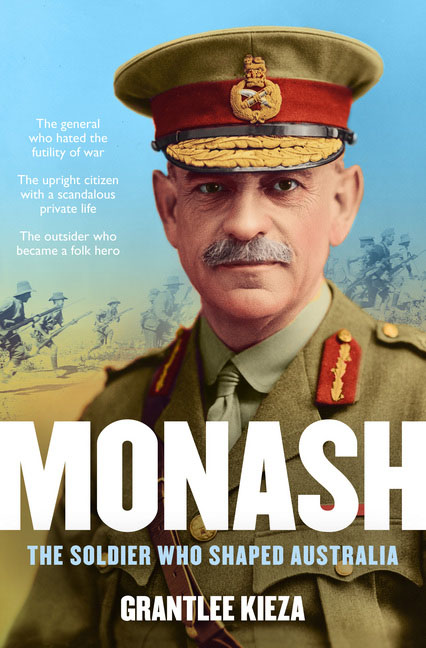