Preserving our proud heritage: the customs and traditions of the Australian Army by Leslie Terrett and Stephen Taubert

MHHV > Articles > War, Society, Memories, Commemoration and Heritage > Preserving our proud heritage: the customs and traditions of the Australian Army by Leslie Terrett and Stephen Taubert

Preserving Our Proud Heritage is a well-researched and magnificently presented large-format book that serves as both an authoritative reference and an attractive ‘coffee table’ display.
The Australian Army’s customs and traditions represent the symbols and substance of much of our national character, adopted from the Army’s forebears and developed since 1901 to where we are today. These customs and traditions shape the Army’s institutional values and to an extent its collective personality, which provides – along with serving members both past and present – the Army’s beating heart.
Much can be learnt from the past and the Army constantly draws on the importance of its comparatively young but rich history. These origins have provided the forms for its badges, insignia and symbols of office; the way Army demonstrates respect for the past through formal functions and dinners, the way it addresses its people, and the way they wear their uniform. These tangible links to Army’s past, like the weft and warp of a rich historical tapestry, set it up well for its future. Just as Army respects its past, it and its people will respect it today and tomorrow.
Preserving Our Proud Heritage is arranged into 14 chapters and covers every aspect of the Army’s customs and traditions. The full-colour images number in the hundreds and the book includes a number of lists and tables as well as an extensive list of acronyms, initialisms and abbreviations. The book includes a companion CD of the Australian Army’s regimental marches and bugle calls, assembled together for the very first time. There is a comprehensive additional reading list as well as a detailed index. Sadly, I did find one mistitled image, but given the vast amount of information contained in the book the editors might be forgiven.
Les Terrett enlisted into the Australian Regular Army in 1975 and during a successful career in logistics spanning 32 years, achieved the rank of Major. He transferred to the Army Reserve in 2007 and is now posted to the Australian Army History Unit as a Project Officer with a focus on oral history and customs and traditions. Les saw active service in Iraq as part of the Coalition Forces in 2003-2004.
Steve Taubert enlisted into the Australian Regular Army in 1974. He left the Army in 1994, having achieved the rank of Warrant Officer Class One in a career spanning over 20 years with the Royal Australian Corps of Transport. Steve is the author of The History of the First Transport Squadron RACT 1914-1989 (first published 1989) and Formation Signs and Vehicle Marking of the Australian Army (1997). He specialises in high quality graphical images of military colours and badges, many of which are shown throughout this book.
Preserving Our Proud Heritage would make a magnificent gift and should be the ‘go to’ reference for every sergeant major and military historian. 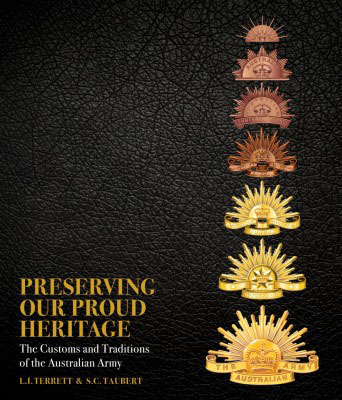