In reviewing this book I must declare “my conflict of interest” as the author is a personal friend and I had the pleasure of launching this riveting narrative of Australia’s most critical period in its history. 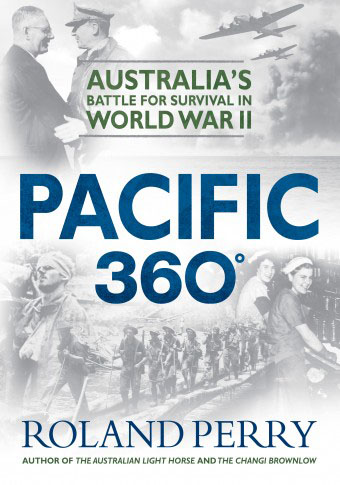 Author Roland Perry’s aim in writing Pacific 360° was to cover three major themes in a book encapsulating the most challenging and critical period in Australian history, being 1941 to 1945. The first theme incorporated the key characters in prosecuting the Pacific war against the Japanese, including Australian Prime Minister John Curtin; Australia’s armed services Commander-in-Chief General Sir Thomas Blamey; US General Douglas MacArthur; British Prime Minister Winston Churchill; and US President Franklin D. Roosevelt. I doubt any other historian would tackle these famous personalities with the same objectivity, verve and warts-and-all approach that Perry has done. This alone makes the book at times riveting, and always an easy, digestible read, which is no easy accomplishment given its scope. His second aim was to interweave the characters with all the major battles with the enemy, so that cause and effect from the decision-makers at the top right through to the front-line are understood. Historians have either covered the politics of the war or the campaigns, but rarely the two in the same story. So, for instance, we are inside the Cabinet with the Australian Government immediately after Perry’s powerful description of the Japanese over-kill when attacking Darwin with 188 bombers and fighter planes on 19 February 1942. We are made vividly aware of the impact of the mini-subs in their attack on Sydney Harbour, and the reaction of Curtin and MacArthur, were, in effect, the war cabinet from 1942 to 1945. Similarly the author takes us right to the heart of the dramatic battle zones in Papua and New Guinea, and exposes the sometimes panicky reaction of key commanders and politicians, who seemed either insensitive or ignorant of the horrific conditions the men at the front faced. The third strand of Pacific 360° was to incorporate the reaction to war of Australians around the country. We see the acceptance in WA and the Northern Territory of the quiet invasion of US personnel as they built up naval and air bases for their counter-attack. This is in contrast to the swamping of Brisbane by 300,000 US servicemen into a city of the same size.  Local males did not always take kindly to the sudden foreign cultural overlay, especially when the Americans charmed the local women and this fraternising led to all-in-brawls in the so-called ‘Battle of Brisbane.’
Perry used Prime Minister John Curtin as the ‘backbone’ for the book and states why he was the obvious choice. The prime minister came to office in October of 1941, two months before the Japanese began their sudden and brutal assaults on foreign territories. He died in July 1945, one month before the atomic bomb was dropped on Hiroshima, which led to the end of hostilities in the Pacific. He was front and centre with all the decisions impacting on the war and was also the important link to all Australian citizens and their reactions. Perry’s attention to character draws out the strengths and weaknesses of the man who held Australia’s fate in his hands. Flawed as he was, Curtin demonstrated single-mindedness in fighting for Australia’s survival. He defied Churchill and Roosevelt, who wanted Australia’s crack troops to fight against Japan in Burma. However Curtin stood his ground and brought them home to stop the enemy on Australian territory in Papua. Pacific 360° outlines all this with unprecedented clarity and compelling, page-turning prose.
I should note that the author has left out the 2nd AIF Battalion prefix that differentiate them from the Militia battalions with the same number to be “reader friendly” or for simplicity; however I believe it is deserving of an explanation or footnote. Also the lack of informative maps to go with some of the narrative is a pity. Despite that, I can unashamedly recommend this very readable book, particularly as it fills in a major gap in Australia’s history.
MAJGEN Jim Barry (Retd)
Defence Reserves Association National President and
Patron, Military History & Heritage Victoria