Stepping into a minefield: A life dedicated to landmine clearance around the world by Ian Mansfield – Book Review

MHHV > Articles > Book Reviews > Stepping into a minefield: A life dedicated to landmine clearance around the world by Ian Mansfield – Book Review

I had the honour to serve with Ian Mansfield in 1992 as he began his second career in the business of ridding the world of land mines. I suspect at the time he did not realise how the next 20 years of his life would be driven by this noble quest. Stepping into a Minefield is a fascinating account of that journey.
Mansfield was serving in the Australian Army when he was selected to command a team of Australian combat engineers to go to Pakistan to train Afghan refugees in mine-clearance procedures. With millions of refugees expected to return to Afghanistan, the United Nations (UN) saw a humanitarian crisis looming and requested help from Western countries to tackle the landmine problem. In September 1991, Mansfield, along with his wife and two young children, left Australia on a one-year assignment … and did not return home for 20 years.
Stepping into a Minefield is a highly personal account recalling Mansfield’s pioneering efforts to set up a civilian programme to clear landmines in Afghanistan and later in Laos and Bosnia. The book highlights the dangers and the tragedies in landmine clearance, but also reveals the great humanity, dedication and humour of the thousands of brave men and women clearing landmines today. It also outlines the political, cultural and security ‘minefields’ that Ian had to navigate along the way, which were often more difficult to deal with than the real minefields.
Landmines are cowardly weapons. They are designed to kill and maim indiscriminately, not distinguishing between enemy combatants and young children. They do not demand that the perpetrators of violence witness the death and destruction they inflict. As Mansfield points out: “One of the perverse aspects of anti-personnel landmines is that they are generally designed to maim rather than kill. In a battlefield situation, a soldier who steps on a mine will be screaming in agony, which strikes fear and caution in his comrades and requires a medic to treat the wounded person and then a number of stretcher bearers to evacuate the soldier.”
Mansfield’s book reminds us that the landmine story is one of hope and revival. Midway through the book, he describes an experience he had in Kandahar two decades ago. He writes: “An old man came up to us holding a bunch of flowers. He asked to speak to me through the interpreter. He said that he was extremely grateful that we had cleared his farming land. He said that he could now die in peace, knowing that his family had a future. He gave me the bunch of flowers which he had grown on his land, and then got down on his knees and kissed my hand.”
The fight to clear and ban the use of landmines continues in earnest. Nearly two decades after its entry into force, the United States and a number of other world powers have yet to accede to the Ottawa Treaty banning anti-personnel landmines. Millions of land mines remain hidden around the world waiting to main and kill; or hopefully to be cleared safely.
Mansfield served as an engineer officer in the Australian Army for 22 years before starting work with the UN for 10 years with field assignments in Afghanistan, Bosnia and Laos from 1991 to 1998 and then at the UN Headquarters in New York from1998 to 2002. Mansfield then served for nine years as the Deputy Director of the Geneva International Centre for Humanitarian Demining based in Geneva, Switzerland. In recognition of his humanitarian work Mansfield was made a Member of the Order of Australia (AM) in 2010. Since 2011, Mansfield has been a private consultant specializing in humanitarian assistance and post conflict activities, particularly in the field of landmine action.
Stepping into a Minefield includes a large number of colour and black-and-white photos and several maps; together with several useful background boxes explaining both how land mines function and certain mine clearance techniques. There is a list of acronyms and an index.
Stepping into a Minefield is a unique story of how one Australian has made a real difference in the world and is certainly worth reading. 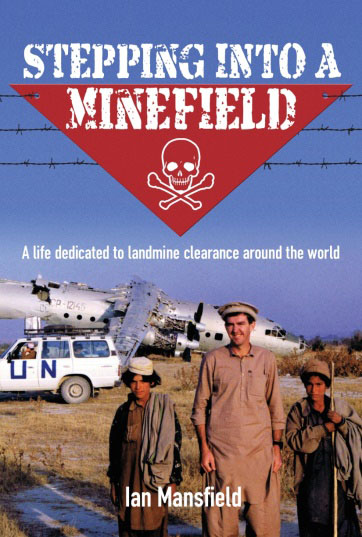