Professor Blaxland opened his presentation to an audience of 31 explaining that the presentation and book about Niche Wars was the result of a conference run by MHHV in Brisbane.

He noted that conference had a number of speakers who had been high level decision makers in Australia’s involvement and/or had a significant role in the subsequent events.

He went on to explain that Australian armed forces have had a long engagement with the Middle East since 1869. In that time Australians had been in Sudan, Gallipoli, Palestine, Iran, Iraq, Egypt, the Gulf as well as Maritime Interception Operations from 1991.

The involvement of Australia in the wars in Afghanistan and Iraq was triggered by the response of the United States to the destruction of the Twin Towers in New York on 11 November 2001 after which the United States elected to pursue terrorists in Iraq and Afghanistan.

Australia’s prime minister of the time, John Howard, decided that Australia’s overarching strategic objective was to support the United States. He also demanded of the ADF that Australian casualties be kept at an absolute minimum, which in effect set up a conflict of objectives. Many of the speakers at the conference noted that it is impossible to run a war with such a dissonance between strategy and tactics. The conflicting objectives resulted in the ADF being unwilling to take risks. Naturally this caused conflict with our alliance partners who felt they could not rely on the ADF to support them in action.

Outside of combat roles, the Australian forces had a more active, but largely invisible, support role. The RAAF provided, amongst other things, transport, surveillance, air-to-air refuelling and air controlling services. The RAN provided screening during the invasion, patrolling during the war and combatting of piracy and smugglers. They considered their operations were a success.

All branches of the ADF found difficulty with interoperability of equipment and systems.

A number of Australians were successfully embedded in various appointments supporting command and control arrangements and intelligence services which provided collection and analysis services in Afghanistan.

Our reporters struggled because the Australians were much more parsimonious with the news than were the Americans.

Police, civil and humanitarian, aid organisations all experienced difficulties in providing their services in conflict zones. In those zones they had problems establishing trust and delivering the services – a challenge exacerbated by lack of continuity in Afghan leadership and central support. Services in large centres like Kandahar were easier to provide.

On the positive side, this was the first conflict that saw the first mass deployment of women in combat related roles in Australian history.

This brief summary does not do justice to the complexity and thoroughness of Niche Wars.

Professor Blaxland finished by questioning why Australia was involved in the wars in Iraq and Afghanistan, especially as it distracted us from our regional focus. He concluded that because of our lack of strategic input Australia was behaving like middle power with small power pretentions.

How to buy books

Copies of Niche Wars (anu.edu.au) can be purchased or read online here – https://press.anu.edu.au/publications/niche-wars

War in the Sandpit

Visit https://www.mhhv.org.au/war-in-the-sand-pit-wisp17/ to see the video presentations from War in the Sand Pit: Perspectives and Lessons from Australia’s War in Afghanistan and Iraq 2001-2014 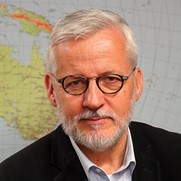 John Blaxland is Professor of International Security and Intelligence Studies at the Australian National University (ANU). He is also a former military intelligence officer and former Head of the Strategic and Defence Studies Centre at ANU and occasional media commentator. His publications include Niche Wars: Australia in Afghanistan and Iraq, 2001-2014 (2020); In From The Cold: Reflections on Australia’s Korean War, 1950-53 (2020); A Geostrategic SWOT Analysis for Australia (2019); The Secret Cold War (2016); East Timor Intervention (2015); The Protest Years (2015); The Australian Army From Whitlam to Howard (2014); Strategic Cousins (2006); Revisiting Counterinsurgency (2006); Information era Manoeuvre (2003); Signals: Swift and Sure (1998); and Organising an Army (1989). 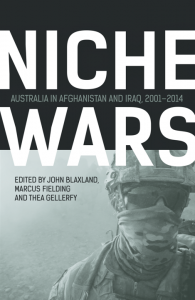 Niche Wars commences with a scene-setting overview of Australia’s military involvement in the Middle East over more than a century. It then draws on unique insights from many angles, across a spectrum of men and women, ranging from key Australian decision makers, practitioners and observers. The book includes a wide range of perspectives in chapters written by federal government ministers, departmental secretaries, service commanders, task force commanders, sailors, soldiers, airmen and women, international aid workers, diplomats, police, journalists, coalition observers and academics.

Niche Wars makes for compelling reading but also stands as a reference work on how and why Australia became entangled in these conflicts that had devastating consequences. If lessons can be learned from history about how Australia uses its military forces, this book is where to find them.