The Australian Army from Whitlam to Howard by Dr John Blaxland


The Australian Army from Whitlam to Howard is the first critical examination of Australia’s post-Vietnam War military operations, spanning the 35 years between the election of Gough Whitlam as Prime Minister in 1972 and the defeat of the Howard Government in 2007.
As David Horner, Australia’s pre-eminent military historian writes in the foreword “the task of integrating new military operations into the broader narrative of Australia’s military history was made difficult because they did not fit the mould of earlier operations.” To his great credit, Blaxland has done a tremendous job in collating and documenting what the Army was doing.
John Blaxland is a Senior Fellow at the Strategic and Defence Studies Centre in the College of Asia and the Pacific at the Australian National University. Prior to this he spent 28 years in the Australian Army including appointments as Defence Attaché to Thailand and Burma and Chief Staff Officer for Joint Intelligence at Headquarters Joint Operations Command. His previous publications include: Strategic Cousins (2006), Revisiting Counterinsurgency (2006), Information-era Manoeuvre (2002), Signals, Swift and Sure (1999) and Organising an Army (1989). He currently writes about Asia-Pacific military, intelligence and security affairs, and is very well qualified to write this book.
In addition to being a historical record, Blaxland contends that the Army has adapted and been successful over this period, and puts forward five reasons why; including individual and collective training, regimental or corps identifies, ties with close allies and regional partners, as well as links with society. These themes are teased out regularly throughout the book to demonstrate prowess but equally Blaxland identifies several issues which could have been perhaps better dealt.
He shows how the Army grew in capability and confidence to play leading roles in East Timor, Bougainville and the Solomon Islands, and to contribute to combat operations in Iraq and Afghanistan. Blaxland usefully addresses the international, national and tactical levels of activity in his account. He has organised the book into four parts covering from Vietnam to the eve of the East Timor intervention (1972-1999); land force operations in East Timor and Solomon Islands; the Middle East area of operations; and Asia-Pacific engagement and adaptation at home.
At a time when the Australian Army’s decade of continuous operations is drawing to an end, and as the ‘Asian Century’ gathers pace, the Army’s strategic role is once again the subject of some debate. Many foresee some parallels from the era following the end of the Vietnam War – reduced budgets and a greater political reluctance to deploy forces overseas. But at the same time, there is significant capital investment being made into air and naval platforms including the two Landing Helicopter Docks. The role of the Army in a ‘maritime strategy’ is a topic currently engaging the minds of Army’s highest echelons.
My sense is that Australia has an enduring interest and will continue to support a rules based global order and will contribute to a range of endeavours that seek to realise a more just and peaceful world. The broad range of military operations and activities conducted between 1972 and 2007 demonstrate this.
The book includes a large number of photographs, a comprehensive list of abbreviations, several clear maps and an appendix listing the operations undertaken in the period, as well as the meticulous notes and references that you would expect from a seasoned writer.
Horner assesses that “until the official histories appear, Blaxland’s book is likely to remain the most thorough, all-embracing account of the Army’s recent activities.” And the official history of the Australian Defence Force’s activities from the East Timor intervention in 1999 has not yet been commissioned. In years to come Blaxland would be well qualified and positioned to lead this effort.
The Australian Army from Whitlam to Howard is essential reading for anyone interested in understanding the evolution of Australia’s military land forces since 1972.
Cambridge University Press, 2013; 434 pp.; ISBN 9781107043657 (hardback); RRP $59.95 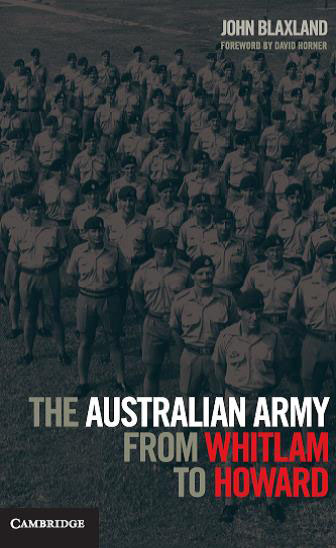