The Backroom Boys – Alfred Conlon and Army’s Directorate of Research and Civil Affairs, 1942-46

A review of Graeme Sligo’s book “The Backroom Boys – Alfred Conlon and Army’s Directorate of Research and Civil Affairs, 1942-46”
When I was serving in the then U.S. Lieutenant General Ray Odierno’s staff in Iraq in 2008, I recall the influential presence of a British female civilian ‘political advisor’, and somewhat bemused that the General’s Iraqi culture advisor was a former New York City taxi driver. War has a habit of bringing together strange bedfellows. Graeme Sligo’s The Backroom Boys is the story of similarly strange bedfellows during World War II.
The Backroom Boys is the remarkable, but little known, story of how a varied group of talented intellectuals were drafted into the Australian Army in the dark days of 1942 and provided high-level policy advice to the Commander-in-Chief of Australia’s military forces, General Thomas Blamey, and through him to the Government. This band of academics, lawyers and New Guinea patrol officers formed a unique military unit, the Directorate of Research and Civil Affairs, under the command of an eccentric and masterful string-puller, Alf Conlon; who in his civilian capacity was also Chairman of the Prime Minister’s Committee on National Morale. A controversial figure, Conlon emerged as a skilled advisor to Blamey with an ability to relate to men of power. 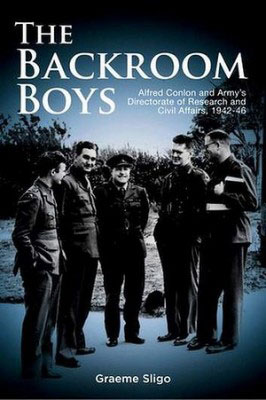 Graeme Sligo is a colonel in the Australian Army who has served overseas in East Timor and Iraq. He is a graduate of the Royal Military College, Duntroon, the Canadian Forces Command and Staff College, Toronto, the National Defence University of Pakistan, the University of New South Wales and the University of Melbourne. Sligo’s own service has exposed him to many strange and exotic bedfellows.
The war brought a huge expansion of the Army in functional as well as numerical terms, particularly after Japan’s entry. The Army had a host and growing number of unfamiliar tasks in developing itself for the purpose of fighting the war: defending Australia; liberating what became Papua New Guinea, and other Pacific islands, and subsequent administration of PNG; the reconquest of North Borneo; and plans for the invasion of Japan and post-invasion military government.
What exactly did the Directorate do? The more suspicious saw it as “an intelligence group, an undercover operation which is shrouded in mystery”. This was most certainly not the case. It was, in its essence ‘a policy advice bureau’ on a range of politico-military, manpower and scientific issues.
According to one of the directorate’s illustrious staff, the poet James McAuley, “Alf’s army directorate was, of course, an extraordinary organisation, and it had in it some of the elements of a Renaissance court, with Alf as a Medici prince.”
The Directorate has been depicted as a haven for underemployed poets or meddlesome soldier-politicians. Based on his wide-ranging research, Sligo reveals a fuller and more fascinating picture. The fierce conflicts in the wartime bureaucracy between public servants and soldiers, in which the Directorate provided critical support to Blamey, went to the heart of military command, accountability and the profession of arms.
The Directorate was a pioneer in developing approaches to military government in areas liberated by the combat troops. The Directorate’s central effort was for PNG. Work in the first instance centred on the period of military government, following the progressive expulsion of the Japanese forces. Conlon certainly had a gift for looking beyond the situation immediately at hand. Conlon’s endeavours addressed many aspects of the post-war development of PNG. Improving educational standards meant a government school system in a field that had hitherto been dominated by the missions. Economic development of the territory required documentation of the geography and geology of the land, and research on the requirements of agriculture.
Staff training and development was a major innovation brought about during World War II. Conlon thought it had a major part to play in preparing for the post-war world, in territories occupied by Australian troops but above all in PNG. The new administration was to have a well-trained workforce, centrally and in the field. This was the origin of what eventually became the Australian School of Pacific Administration, eventually located in Sydney.
As the war in the Pacific drew to a close, the Directorate was deeply involved in the prospective military government of the North Borneo territories until the British could fully resume their stewardship of the area.

The Backroom Boys includes a large number of illustrations and several clear maps. It also has a list of abbreviations, ranks and notes on a significant number of the characters included in the book. There are three annexes listing the Directorate’s members as well as the staff and students of each course it ran. Sligo has included a meticulous set of end notes and a comprehensive bibliography. In all, Sligo has produced a first-class book on a little known and elusive topic.

The Backroom Boys provides a detailed historical example of how post-war occupations can be planned and successfully implemented – an issue is of enduring importance as the recent ‘stability operations’ in Iraq and Afghanistan have demonstrated. While the topic cannot be easily digested by contemporary military and government practitioners, translating its enduring lessons into contemporary multi-agency doctrine should be a priority for Defence and its Australian Civil-Military Centre.