“ The German officer pulled out his Luger and shot Norm  right between the eyes. These are the stories that will never be told” said  the 93 year old World War 2 veteran fighting back tears. Yet, the Pancretan Association of Melbourne – Australia  has embarked on a journey to gather material on Australian servicemen who fought in the battle of Crete in 1941, in order to tell the stories that were kept hidden for decades. After years of determined and consistent efforts to bring to the fore eyewitness accounts and personal stories of Australian servicemen of WW2, these stories have been collected into a book titled “The Battle of Crete: the untold stories”. 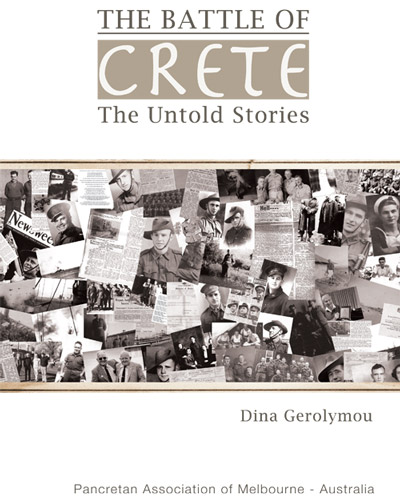 It contains the profiles of 66 veterans including personal narratives, photographs and letters never before published. The book also includes the stories of veterans’ descendants who shared their childhood memories with the Pancretan Association, making the book a living testament to Australia’s commitment to freedom and democracy.  It also contains a series of profiles of veterans who have represented Australia in the 60th and 70th anniversary official commemorations of the battle of Crete in Greece. The book endeavours to record and preserve the shared history of Australia and Greece and serves as a contribution to the strengthening of the links between the two countries.
“The Battle of Crete: the untold stories” is another piece of evidence of the commitment of the Greek-Australians from Cretan descent to pass on first-hand knowledge of important historical events which have left their mark on both the Australian and the Greek psyche. Furthermore, as many of WW 2 veterans included in this book are sons of ANZACS from First World War we believe the timing to be auspicious as we approach the centenary of the Great War.

Contact Battle of Crete & Greece CC about this article.