The early muzzle-loaders in the Victorian Volunteer Forces

There was a proliferation of various types of rifles used by both the Volunteer Forces from 1860.  We can eliminate a few of these from this review, namely the short-barrelled percussion muzzle-loading carbines due to their lack of accuracy beyond 300 yards, as in those early days, all short range competition was carried out either standing, or in the kneeling position.  There was one exception to this, namely the Westley Richards capping breech-loading carbine, commonly known as the ‘Whitworth’ carbine; being the name stamped on the barrel acknowledging the patentee of the rifling system adopted by the manufacturers, Westley Richards and Co., rather than the patentee of the action.
The ‘Enfield’ rifle, as it was then commonly known as, used a paper-wrapped cartridge containing a pure lead conical projectile known as a ‘Pritchett’ bullet, after one of its inventors, Robert Taylor Pritchett of the gun-making firm Pritchett & Son, London, and W. E. Metford, of Bristol.  The Pritchett projectile was a smooth-sided bullet with a half-round hollow base, and when the black-powder charge of 70 grains was ignited by the percussion cap placed on the outside nipple, the force generated by the explosion would expand the hollow base into the rifling.  The Enfield’s bore was a nominal .577″ in diameter, with a true mean diameter of .5785″ plus or minus 0.0015″.
When the Enfield rifle was first introduced, the projectile used had  been larger in diameter, however during the Indian Mutiny the Enfield was almost rendered useless after several rounds were fired, due to the build-up of fouling from the black powder and burnt remnants of the paper cartridge wrapper, resulting in the then larger bullet diameter of .568″ jamming half-way down the bore during reloading.  The reduced bullet diameter did not impede accuracy and remained the standard Government–issue cartridge throughout the life of the Enfield rifle.
Later tests carried out at the School of Musketry Malta however, established that the problem was not in the Pritchett design, but in the thickness of the paper wrapper, being too thin, and the lubricant of the day, which had a tendency to melt in hot climates. This resulted in the projectile being pushed through the wrapper, allowing the exposed projectile to drag against the rifling, thus depositing lead, to which the powder fouling adhered to. Despite this discovery, and the fact that the new reduced-bore cartridge had eliminated the jamming problem, it was determined that the new cartridge would remain in service.
In 1856 the British Government approved a short rifle, which was given the designation ‘Pattern ’56’.  The earlier long rifle, the ‘P’53’, being its official designation, still remained in use, however with the introduction of the short rifle, as a result of the British Army requesting a ‘handier’ rifle than the P’53, and despite the shorter barrel, it was no less accurate than the longer barrel of the Enfield rifle.  Unlike the P’53 which had a rifling twist of 1 in 78″, the new short rifle had a barrel twist of 1 in 48″, and by late 1859 accuracy was further improved by the addition of a boxwood plug placed into the hollow cavity of the bullet which ensured uniform expansion of the bullet’s skirt into the rifling.
It was at this time that Mr F. C. Christie  of Williamstown, Victoria wrote a letter to the Melbourne Argus on 4 December 1860 claiming that he was the inventor of the ‘Conical Wooden Plug Rifle Ball’ and provided a letter from John Blanch & Son, Gunmakers of London dated 25 June 1860, that Christy had instructed that firm in December 1852 to manufacture 1,000 box-wood plugs to suit a rifle of unknown calibre in Christy’s possession.  Nothing further was heard from Mr Christy regarding compensation for his invention. Mr Pritchett, on the other hand, had been awarded £1,000 by the British Government for his contribution in 1854.
1860 of course saw the establishment of the National Rifle Association of Great Britain, and the Colonies of New South Wales and Victoria followed with rifle associations of their own, devoted to supporting proficiency with the musket for their Volunteer Forces. 1860 also saw the significant deployment of the British regiments in Australia to New Zealand (the Second Maori War).  By this time the Volunteer Forces were receiving Westley-Richards ‘Whitworth’ carbines, including Short Enfields as well as the long pattern, and large-bore ‘Lancaster’ rifles; the latter not being rifled in the conventional manner.  Being smooth-bore the inside of the barrels were cut on a circular twist, slightly ovoid, with the minor axis being .577″ and the major axis being .593″.

In 1866 the Victorian Government purchased a substantial number of Lancaster ‘carbines’ as they were then called, directly from Charles Lancaster, the London manufacturer. These rifles, which were known as ‘reduced bore’ rifles, came about following recommendation from the manufacturer that better accuracy was achievable by reducing the bore diameter to a nominal .568″ from the original .577″.  They are not to be confused with the British Government Lancaster Carbine that was previously used by the Victorian Volunteers, which was the same carbine issued to the British Royal Sappers & Miners taking the .577 government cartridge.
The Lancaster reduced-bore rifle remained the main-stay of the Victorian Volunteer forces until replaced by the Martini-Henry rifle in the 1870s.  No other Australian colony used the reduced bore Lancaster; nor did the British Government.  The rifle clubs – comprising Volunteers – preferred using them in competition  when first issued in the 1860’s, but as time progressed the barrels started to wear and competitors in rifle matches blamed the numerous wild shots on the rifle, describing the barrel as a bit of ‘old gas-pipe’, which had an element of truth in it, but as all ammunition for the muzzle-loading rifles at the time was imported from England, many cartridges arrived damp, or damaged, which coined the comments from shooters of ‘another fizzer’. 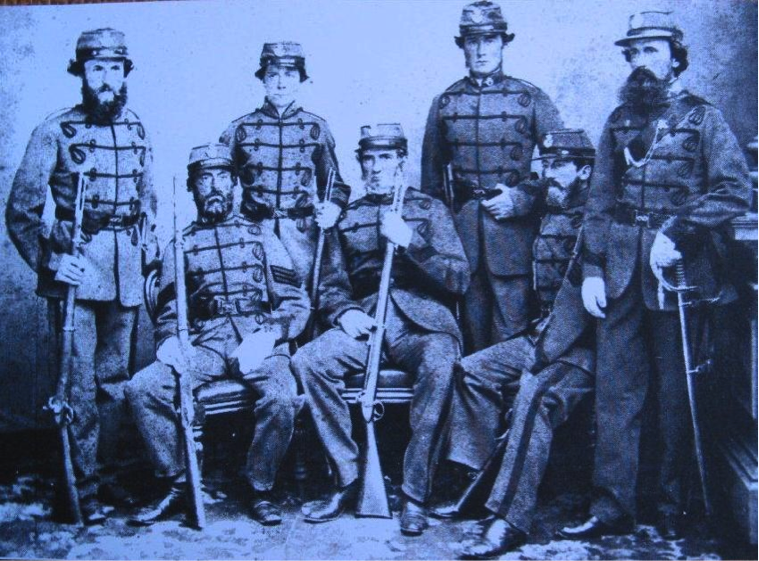 The Indian Mutiny saw the abolishment of the ‘greased’ cartridge – a manufactured lubricant, not animal wax – being replaced by a ‘waxed’ cartridge comprising five parts wax to one part tallow. By 1860 this had been replaced by pure beeswax following the reduction of the bullet diameter to 0.55″ for British and Colonial Forces use.  The change from a greased cartridge to the waxed cartridge caused considerable uproar from Victorian Volunteers using the Government-supplied ammunition. It was again a good excuse to blame inconsistent shooting scores on ‘dud’ ammunition, so much so that several complaints were published in the Melbourne Argus.
Typical of these was the letter from ‘Lancastrian’ of Melbourne on 21 August 1861 regarding the disappointing performance of the government waxed ammunition over the old greased ammunition.  The writer took umbrage to the Governor of Victoria Sir Henry Barkly’s earlier statement that: ‘…the waxed ammunition was the proper ammunition for the Lancaster rifle’. In short, Sir Henry did not know what he was talking about.  This letter was then followed by further correspondence from riflemen supporting ‘Lancastrian’s’ statement and urging shooters to purchase ammunition directly from Mr Millar of Westgarth Street in Fitzroy, who was: ‘…presently manufacturing Whitworth, Enfield, Lancaster, Terry’s Westley Richards, and Turner’s patent ammunition of the best quality, including ‘swaged’* bullets with cartridges greased in lieu of waxed.’  These locally made cartridges, however, were nearly three times the price of the government-supplied ammunition.
*Swaging describes the process of the lead bullet being manufactured from a pre-cut length of lead “wire” that is then fed into a cylinder shaped in profile to a finished bullet. A plunger then forces the lead plug under considerable pressure to conform to these internal dimensions. Swaging produced a more uniform projectile in both diameter and weight over the old method of casting the lead projectile.