The Fighter by Paul Warren with Jeff Apter – Book Review

In 2009 Private Paul Warren deployed with the 1st Battalion, The Royal Australian Regiment, to Afghanistan. One month after he arrived in Afghanistan he was on patrol in the Baluchi valley and his team was hit by an improvised explosive device. Private Benjamin Ranaudo was killed instantly and Paul lost his right leg. Paul’s life was saved by the quick work of his battalion, who got him a helicopter within 16 minutes for surgery. Paul was flown to Germany and then back to Australia, where he received treatment for his injuries in Brisbane.
Paul grew up in Toowoomba and from an early age became involved in martial arts and Muay Thai. At the age of 17 he represented Australia in the Muay Thai World Championship where he placed 4th. After becoming a professional fighter he competed in 31 fights and won two Queensland super middleweight titles and two Australian super middleweight belts. In 2006 he badly fractured his shin and was forced to retire from professional fighting. So he then joined the Army – another form of professional fighting.
Returning to Australia from Germany, Paul underwent an extensive period of physical and psychological rehabilitation – a slow and, at times, a desperately painful process. There were many dark times as Paul struggled with the shattering effects of post-traumatic stress disorder (PTSD), and guilt and grief over the death of his mate Benjamin. At his lowest ebb, Paul thought about taking his own life, as so many other soldiers in similar circumstances do.
But the discipline and toughness he had learned from his martial arts training and the fierce love of his partner helped him mend. His drive and determination saw him rehabilitate to a level where he competed in the 100m sprint at the 2014 Invictus Games in London.
Paul should be applauded for writing his autobiography. In doing so he will contribute towards improving public knowledge about Australian soldiers deployed on operations, as well as reducing the stigma associated with PTSD.
Paul is a true fighter in all senses of the word, from martial arts, to war, to recovery. Paul eventually left the Army in 2013 and presently works for Mates4Mates in Townsville – an organisation dedicated to helping injured soldiers. The Fighter is a story of courage, determination and love that will move all those who read it. 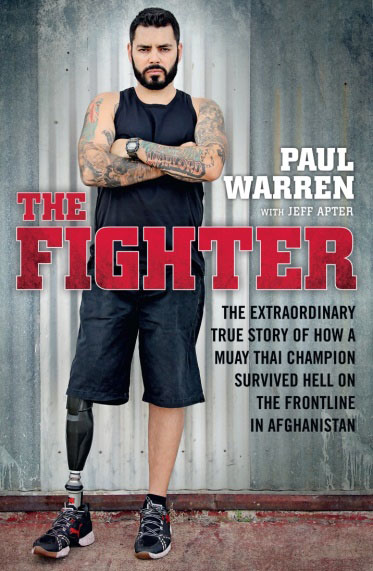