The Mystery of AE1: Australia’s Lost Submarine and Crew by Kathryn Spurling

MHHV > Articles > World War One to 1939 > The Mystery of AE1: Australia’s Lost Submarine and Crew by Kathryn Spurling

The loss of AE1 with her entire complement of 3 officers and 32 sailors was the Royal Australian Navy’s (RAN’s) first major tragedy and it marred an otherwise successful operation to seize the German possession in New Guinea in the opening weeks of WWI.
It is not known what caused AE1 to disappear without trace. 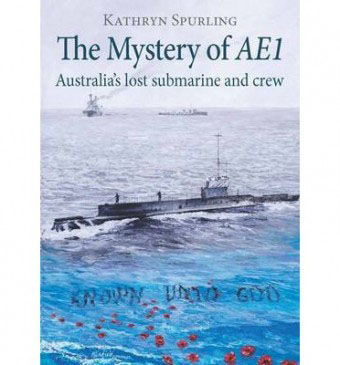 Australia’s first submarines, AE1 and AE2, entered Sydney Harbour in time to join the celebration of Empire Day 24 May 1914 after a long voyage from Britain that The London Times declared: ‘manifestly the most remarkable yet performed by a submarine’. Australians were fascinated by their submarines and proud that their young navy was bravely at the forefront of such technology.

Britain declared war against Germany on 4 August 1914 and the British Admiralty despatched the Australian fleet to capture German New Guinea and destroy the German Pacific Fleet. On 14 September AE1 left Rabaul Harbour, with orders to patrol east of Cape Gazelle, and was seen off Duke of York Island in St George’s Channel. Then AE1 simply disappeared. An ensuing search found no trace, and for the families of the 35 officers and men on board AE1 life would never be the same.

The Mystery of AE1: Australia’s Missing Submarine and Crew traces the beginnings of Australia’s navy and searches for answers to the questions that continue to be asked: Who or what contributed to the loss of Australia’s first submarine? What killed the crew of AE1? Where do they lie? And why has Australia neglected them and their descendants?

Dr Spurling is currently a Visiting Scholar at the School of History and Social Sciences, Australian National University in Canberra. She served with the Australian Navy. After attaining her PhD she taught history and strategic studies at the University of New South Wales at the Australian Defence Force Academy in Canberra. Dr. Spurling is the author of Cruel Conflict: the triumph and tragedy of HMAS Perth and A Grave Too Far Away: A Tribute to Australians in Bomber Command Europe both published by New Holland.

Since 1914 several searches have been conducted to establish the whereabouts of AE1. Regrettably none of these have been successful. Most recently, between 6 and 9 September 2014, HMAS Yarra undertook another search, around the Duke of York Islands, prior to a memorial service for the centenary of the submarine’s disappearance. Although numerous sonar ‘contacts of interest’ were made during the search, most were identified as natural terrain. One sonar contact, however, has been marked for further investigation.

The Mystery of AE1: Australia’s Missing Submarine and Crew is lavishly illustrated and contains a large number of quotes from diaries and letters. There is a biography on each of the crew members. As is typical for Spurling’s work there are extensive notes, a good bibliography and comprehensive index.

I commend The Mystery of AE1: Australia’s Missing Submarine and Crew to all those that have an interest in the early years of the RAN as well as the relatively unknown Australian Naval and Military Expeditionary Force campaign in the Pacific in September 1914.