The Western Front: an Australian perspective is a beautifully presented and well researched large format (coffee table) book that provides an evocative multi-dimensional perspective; and is probably the next best thing to physically visiting the Western Front.
The book follows Australian troops from their first arrival on the Western Front in March 1916 to their last action at Montbrehain in October 1918. It looks at the part they played, the locations where they fought, the conditions they endured, the cemeteries where the dead are buried, and some of the memorials that commemorate their sacrifice. It takes a then-and-now approach to the 1914–1918 battlefields, offering a finely balanced mix of words and photographs that will help readers, and visitors to the area, understand and appreciate the Western Front as it once was and as it is today.

Gallipoli holds a special place in our nation’s story, but it belies the truth that Australia’s greatest losses and our greatest achievements in World War I were elsewhere. Gallipoli, despite more than 8000 Australian and the many more other Allied and Turkish lives it cost, did not change the course of the war by a single day. The outcome of World War I was decided in France and Belgium. The vast majority of Australian casualties of that war occurred on the Western Front: 47,000 dead and more than 130,000 wounded; almost two-out-of-three of those who served. It was on the Western Front that the gallant amateurs of 1916 learned the hard tradecraft of war, and although they suffered mightily, when victory or defeat swung in the balance in 1918, they shaped the course of history in a way that Australians had not done before, and have not done since.

The Western Front is illustrated with 180 black-and-white wartime photographs and 250 colour photographs taken by multi-award-winning photojournalist Bruce Postle. Using specially commissioned maps, stark wartime images and beautiful modern-day photographs, this book takes a then and now approach to the battlefields, offering an understanding of the Western Front as it once was and as it is today. Extracts from war poetry and literature underscore the horrors of the war. It is a tribute to the Australian soldier, the central character in the Australian story of war.

While much has been written of that war, official histories, personal accounts, academic perspectives, fiction, poetry and more, this book is a worthy addition to the library. There are some well-drawn maps that do not need an expert to interpret; and some crisp text by Phil Dwyer and Helen Duffy which sets the Australian experience of the Western Front in time, place and purpose. For many visitors, the battlefields of the Somme and Flanders are a sweep of flat or gently undulating ground, resplendent in the green and gold of wheat of canola in spring and summer, swept with snow in winter, the scars of war all but unseen. Despite the many memorials, it is not always easy to make wartime sense of the modern landscape. Therein is the magic of this book – Postle places wartime black-and-white photos alongside superb images of the same places and scenes today. In doing so, he connects the past to the present. Many landscape images are marked over with a few lines and numbered reference points, simply explaining key points on the former battlefields. These markings and the brief accompanying text are invaluable to those who seek to understand ‘what happened here’. And amid the history and imagery, lines of poetry and other quotes lend both humanity and poignancy.

Dwyer is one of Australia’s top music industry attorneys. His interest in the Western Front was sparked more than 20 years ago while working in Paris. He made many visits to the Somme, concluding that it would be a good idea to make Australians more aware of the Western Front. Helen Duffy has worked in the book publishing industry for some 30 years as an editor, publisher and writer. Bruce Postle is a multi-award-winning photojournalist. His photographs, taken over five decades, form an important contribution to the illustrative record of the nation’s social, political and sporting history.

Some of the images are complemented by the stories of individual Australians. One of them is Albert Postle, Bruce’s great uncle. Albert was an infantryman. He fought at Bullecourt, Messines and Polygon Wood in 1917, was seriously wounded and taken prisoner at Dernancourt in April 1918 – to survive, return to Australia, marry and raise a family, establish a business, and, 20 years after coming home, to re-enlist for another war.

The focus of this book is the more than 290,000 Australians, all volunteers, who served on the Western Front. However the authors have ensured that this is not a singular story. The service and sacrifice of the many millions of British, Canadian, French, German, Irish, New Zealander and others troops is also acknowledged, a sober reminder that service and sacrifice, triumph and tragedy, is unbounded by nationality.

As we approach the centenary of the arrival of the Australian Imperial Force in France, their story deserves to be better known. This book will appeal to all who seek to comprehend one of the great early chapters of our nation’s story. For some, this book will be a source of pride, for others, sorrow. I believe it is the authors’ hope that readers might feel both – quiet pride in the extraordinary achievements of these ordinary Australians, and sorrow at the price paid by their nation and its families. The authors have done the Australians of the First World War a great honour with this fine book. 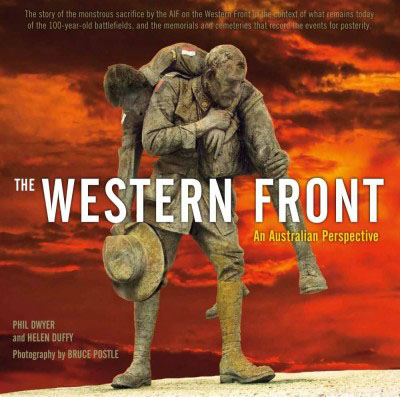