The letterhead on the RUSI Victoria Newsletter shows one of the artillery pieces located in front of Victoria Barracks – a Turkish 5.9 inch howitzer. 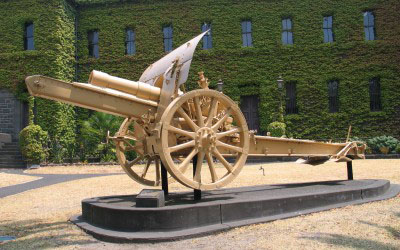 The plaque in front of the gun states that it was captured on the 8 November 1917 by the Australian Mounted Division near Huj, during the offensive against the Gaza-Beersheeba line which culminated in the occupation of Jerusalem.
The village of Huj was established in a hilly area on the northern edge of the Negev Desert sometime between 1818 and 1820 by Mustafa Bey, the Ottoman Governor of Gaza and Jaffa. He built a police station to keep the village secure, and offered free land to encourage migration to the site from Gaza from amongst the surrounding Bedouin tribes. Today, Huj is a Palestinian village located 15 km northeast of Gaza City.
The 3rd and 4th Australian Light Horse Brigades together with the 5th Yeomanry Brigade formed the Australian Mounted Division at that time.
The gun was most probably captured by members of the 9th Light Horse Regiment as part of the 3rd Australian Light Horse Brigade.
The 9th Light Horse Regiment was formed in Adelaide and trained in Melbourne between October 1914 and February 1915. Approximately three-quarters of the regiment hailed from South Australia and the other quarter from Victoria.
The 3rd Light Horse Brigade fought at Gallipoli and was the unit involved on the disastrous attack on the Nek on 7 August 1915.
With the fall of Gaza on 7 November 1917, the Turkish defensive position in southern Palestine collapsed. The 9th Light Horse participated in the pursuit that followed and led to the capture of Jerusalem in December 1917. An account of the fighting on 8th November 1917 reveals that the brigade took several guns in the afternoon. An extract follows:
One of the [Turkish guns] was galloped by a patrol under Lieutenant G.L.H. Mueller, of the 9th Light Horse, and the team of bullocks was shot after all the efforts of the Australians to drive the little Turkish bullocks had failed. Lieutenant W.H. Lilly of the machine-gun squadron, advancing boldly with two [machine]- guns, destroyed the team of another, and afterwards co-operated with Lieutenant F.J. MacGregor, of the 10th Light Horse in the capture of a third. This gun, a 5.9-inch howitzer was in action against the Australians at a range of 1600 yards, and MacGregor saw the enemy bring up teams for its withdrawal; he therefore, with Lilly covering his advance with a machine-gun, rode forward with four men, captured a German officer with the crew of the gun, and under heavy fire shot the team of animals.
Next time you walk past this artillery piece on your way to a RUSI Victoria event please take a moment to reflect on the actions that led to its capture and the military heritage it represents.