U.S. Forces at the MCG

70th Anniversary Dinner Address to Melbourne Cricket Club 22 November 2012
On the 7th August 1942 at nine o’clock in the morning the ramp of an American Landing Craft banged down in the surf of ‘Beach Red’ east of Lunga Point on an obscure island in the Solomon Islands chain called Guadalcanal.

The men of the 1st Marine Division who ran up the beach that morning had no idea they were beginning a bloody, six-month battle that would be the first United States victory on the ground in the Pacific theatre in the Second World War.

As America’s first ground offensive in the Pacific, the invasion of Guadalcanal was a clumsy affair. Alarmed by the discovery that Japan was building an airfield on the island that could cut Australia off from North America, Chief of U.S. Naval Operations, Admiral Ernest King ordered the 19,000 men of the 1st Marine Division to be rushed to Guadalcanal from their training base in New Zealand.

The invasion force was assembled in such haste that the Marines had only enough food for 60 days and enough ammunition for 10 days of heavy fighting.
But despite that, everything went well at first. Major-General Alexander Vandegriff’s men met little opposition on the beach and seized the critical airfield three miles inland within 36 hours. It would eventually be called Henderson field in honour of Marine pilot Major Lotton Henderson who had been killed at the Battle of Midway two months earlier.

But the Marines’ good fortune did not last long. On the evening of the 8th August, just one day after the initial landings, Rear-Admiral Frank Fletcher decided to withdraw the three aircraft carriers that were providing air cover for Vandegrift’s transports.

Later that same night, a Japanese cruiser task force sank one Australian and three American cruisers in the waters near Guadalcanal.

The naval battle would come to be known as the Battle of Salvo Island and it was the first of a series of clashes to decide the control of the sea around Guadalcanal.

(As a quick aside, an organisation I am also involved with – Military History and Heritage Victoria – has recently appointed a fellow called Mackenzie Gregory as its Vice-President. ‘Mac’, as he is known, was a sub-lieutenant on the HMAS Canberra which was sunk in this battle.)

In the next six months the U.S. would lose two aircraft carriers, seven cruisers and 14 destroyers while the Japanese lost one aircraft carrier, two battleships, four cruisers and 11 destroyers.
The transports fled the next day taking with them 3,000 Marines who had not had time to disembark and much of the division’s ammunition and heavy artillery.

The 10,000 Marines on Guadalcanal were on their own.

The campaign was a race between the Marines and the Japanese Imperial Army to concentrate enough force to defeat each other. The difficulties of gathering those troops were compounded by the hostile environment of the dense jungle on Guadalcanal.

Back on the island, the Marines ate Japanese rice and used Japanese construction equipment to finish the airfield which would be critical to the ultimate control of the seas around Guadalcanal. But the day before the first US fighters arrived to support the Americans; the Japanese launched their first counter-attack.

On the 20th August, 1,000 soldiers led by Colonel Kiyono lchiki attacked Marine positions on the left flank at the mouth of the llu River. But the Japanese underestimated the American strength, a mistake they would repeat several times in the campaign. Thinking there were only about 2,000 Marines on the island, lchiki’s men attacked in three waves and were mowed down by the 2nd Battalion of the 1st Marine Regiment. More than 800 Japanese were killed and lchiki committed suicide soon after.

The Japanese brought more soldiers to Guadalcanal on destroyers that travelled only at night to avoid the planes on Henderson Field and by the 12th September had assembled a force of 3,000 men. Major-General Kawaguchi attacked from the south across a hill that became known as Bloody Ridge because of the intense fighting on its slopes.

Colonel Merritt Edson’s elite Raider battalion and parachute battalion bent under the assault, suffering 40 dead and 103 wounded, but did not break. Kawaguchi was not so fortunate and lost 600 killed and 600 wounded in two nights of vicious fighting.

On the 9th October the Japanese made a third and final attempt to drive the Marines into the sea when Lieutenant-General Harukichi Hyakutake gathered a new force of 20,000 men plus heavy artillery and planned to strike at the American centre and right simultaneously, but the terrible terrain made exact co-ordination between the two columns impossible and they attacked 24 hours apart.

That might not have been fatal except the Marines had received their own reinforcements in the weeks before the attack. More Marines and the U.S. Army’s 164th Regiment brought the American strength on Guadalcanal up to 23,000 soldiers.

Hyakutake attacked and was slaughtered on the American defences. The Americans had withstood against the last Japanese attempt to dislodge them from Guadalcanal.

On the 9th December, the battle and jungle weary 1st Marine Division was taken off the line and sent to Melbourne to rest and recuperate. The fighting cost the division 650 men killed in action, 1,278 men wounded in action with a further 8,580 men contracting malaria and 31 men missing in action.

In their place the Americal Division and the 25th Division, both army formations, and the 2nd Marine Division, a total of 50,000 men under Major-General Alexander Patch, continued the fight to control Guadalcanal.

Hyakutake had less than half that number and a critical shortage of supplies left his men weak and sick.

In January of 1943, Patch fought his way down the length of the island, overrunning Hyakutake’s headquarters. The Japanese managed to evacuate 13,000 soldiers by night and the campaign ended on the 8th February 1943.

In total, the United States lost 5,600 casualties of which 1,500 were killed while the Japanese lost an estimated 24,000 dead. It was a costly start to the Pacific campaign that would take another two and a half years to see the defeat of Japan.

In early 1942, after the outbreak of the Pacific war, the Australian Commonwealth Government requisitioned the MCG for military purposes. 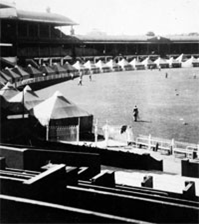 Between April and October 1942, the US Army’s Fifth Air Force occupied the ground in what became affectionately known as Camp Murphy, named in honour of Colonel William Murphy, a senior US Army Air Force officer killed earlier in the war in Java.

The First Regiment of the 1st Marine Division were quartered at Camp Murphy for several months in early to mid-1943.

Melburnians en masse proved wonderful hosts to the Americans. Melbourne was described as the “best liberty port in the world.” Hundreds of servicemen were taken into Melburnians’ homes and softball and gridiron matches were played on the MCG. On the 14th March 1943 the marines hosted a giant “get together” of U.S. and Australian troops on the arena.

After resting and recuperating in Melbourne the 1st Marine Division went on to fight in New Guinea, New Britain, Peleliu and Okinawa. After VE Day the Division was garrisoned in China until 1947.

The 1st Marine Division has subsequently fought in the Korean War, the Vietnam War, the war to liberate Kuwait, the Iraq War and the Afghanistan War.

In 1977, on the 35th anniversary of their stay, Melbourne Cricket Club president Sir Albert Chadwick and Colonel Mitchell Paige, who was awarded the Congressional Medal of Honour for his actions as a Sergeant on Guadalcanal, unveiled a commemorative plaque recognising the Americans’ time at the ground.

Between 1942 and 1945 the MCG was used by the US Army Air Forces, the U.S. Marine Corps and the Royal Australian Air Force. In all, more than 200,000 personnel regarded the ground as their temporary home away from home.

This year marks the 70th anniversary of military forces being stationed at the MCG.

The ground’s contribution to the war effort remains a very proud chapter in the MCC and MCG’s history.

Close bonds of friendship and cooperation between the United States Marine Corps and the Australian Army were forged in the Pacific campaigns of the Second World War and continue to the battlefields of today.

The 1st Marine Division in particular has a special link with Australia.

The Division’s insignia patch includes the Southern Cross constellation, and it was during their stay in Melbourne that the Division took the traditional Australian folk song ‘Waltzing Matilda’ as its battle hymn. 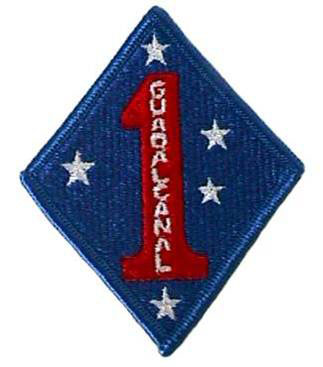 To this day, young Marines in the 1st Marine Division still ship out to this song being played. And it all began here some 70 years ago.
Download “Bob Shields and Camp Murphy, 1942.” From “The Yorker” Issue 41, Autumn 2010
Download “Who was Murphy?” From The Yorker. Spring 2002